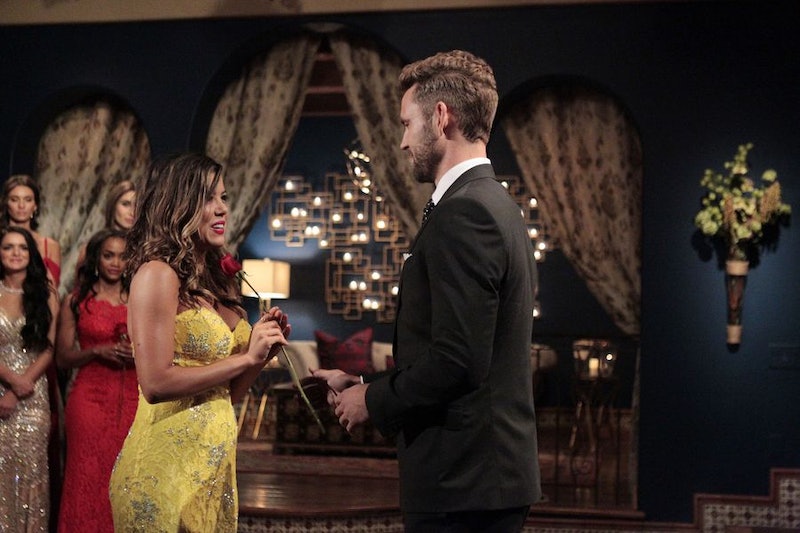 Every person competing on The Bachelor struggles to make a unique impression, and not falling into the trap of being a stereotype. By the time Christen Whitney walked out of the limo to greet Nick Viall on his season of The Bachelor, she'd already revealed what the show eventually made her edit: She was a virgin waiting to have sex until marriage for religious reasons. And what happened to Christen on Nick's Bachelor season showed the mixed results of that upfront approach. Less weepy than Ashley I., more frank than Becca Tilley, Christen's early confession didn't help her win the series, but it was a novel approach to something often regarded as strange on the show.

Bachelor alum Becca Tilley said to Us Weekly Christen's confession she is a virgin helped to destigmatize a totally normal situation. "I think people make a big deal about people being overly sexual or whatever, so I think it’s important to bring both aspects of it, to show there are people on both sides of it who are normal and not sitting in a room by themselves." And Christen certainly didn't spend her time on The Bachelor sitting in a room by herself. In fact, she was the person Liz Sandoz confessed to about her previous one-night stand with Nick, putting Christen in an awkward position of knowing a major secret... and she immediately confessed, leading (indirectly) to Liz's elimination.

After that, Christen managed to stick around, but only for one additional episode. Her over-the-top facial expressions and personality were decidedly upstaged by Corinne Olympios, who flaunted all of the usual Bachelor rules and pulled stunts like showing up wearing nothing but a trench coat and some whipped cream, or sleeping through a rose ceremony, or talking about her "nanny." That took up a lot of screen time, and Christen was one of the many fellow competitors who thought Corinne's behavior was unfair. Unfortunately, Christen would up being eliminated in the third rose ceremony, and never really had a chance to make a strong connection with Nick.

But even so, that doesn't mean that Christen is doing any worse because she didn't win The Bachelor. She's still a successful wedding videographer, and according to her LinkedIn, is also working in sales for European Wax Center. Christen has also become an avid member of the Bachelor Nation Twitter brigade, chiming in to give her opinion about Rachel's season of The Bachelorette and, here and there, the occasional comment about Bachelor in Paradise, including some shock about just how dramatic this season was, to offering support to DeMario Jackson.

Christen certainly didn't wind up with much to show for her experience on The Bachelor. She left in tears, saying, "I didn't expect to go home tonight. I was my honest self and that wasn't for him. I was so ready to fall in love. I've never told anyone I loved them." Since then, it's not clear if Christen managed to finally find someone who was also looking for a serious relationship offscreen, but her appearance on Bachelor in Paradise Season 4 suggests that, at the very least, she's still trying to find a special someone.

And as for whether or not Christen is still a virgin, well, it's far from the most interesting thing about her — so if she wants to be as upfront as she was on Nick's season of The Bachelor, that's great, but that's her call and fans need to respect it either way. Hopefully, Christen won't be overshadowed by drama in Paradise and will have the chance to let her personality shine.