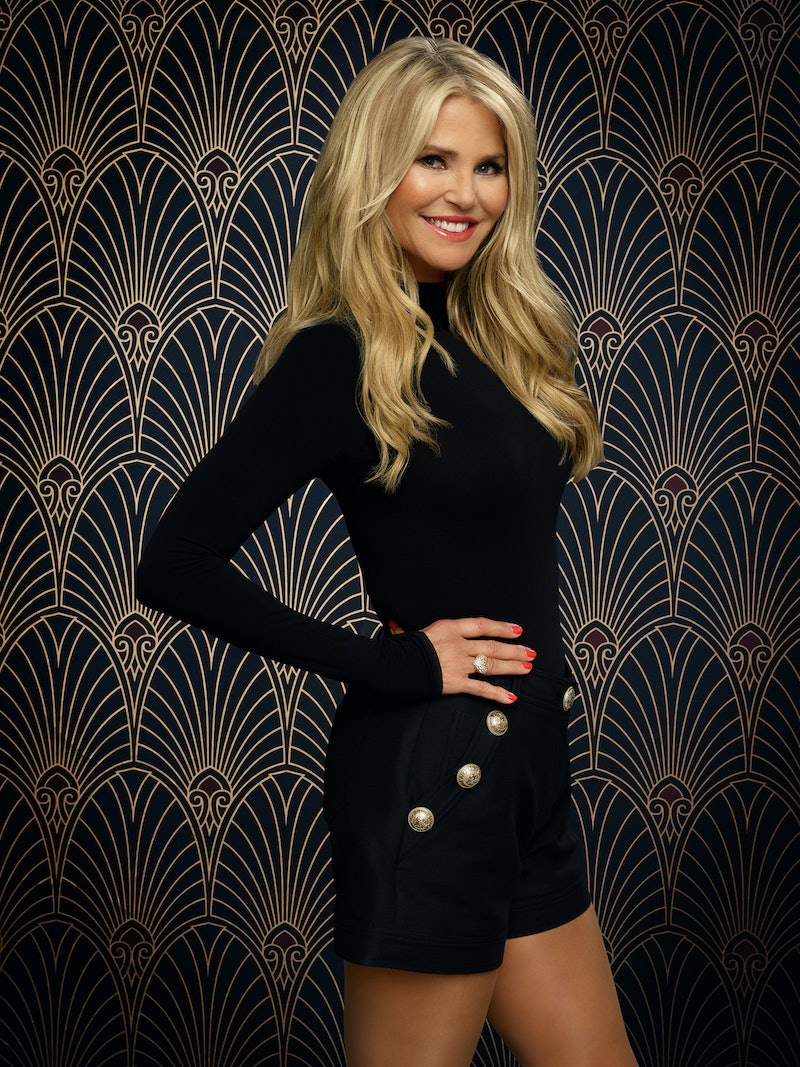 One contestant on the new season of Dancing with the Stars will have to wait a bit longer to do the tango on stage. As fans will notice when they tune into the Season 28, the all-star lineup will be a bit different than what was announced. So, what happened to Christie Brinkley on DWTS that caused her to leave the competition? The iconic supermodel broke her arm during rehearsals, but don't worry, someone close to home is stepping into her dancing shoes. Brinkley's daughter Sailor Brinkley-Cook will take her place on the show, and she only has a few more hours to learn her first routine of the competition.

“While rehearsing for the premiere of ‘Dancing with the Stars,’ Christie Brinkley suffered injuries which required surgery to her wrist and arm. She is unable to continue her planned participation on the show," ABC and BBC Studios said in a statement released on Monday, Sept. 16, obtained by Bustle. "Keeping it all in the family, her daughter Sailor Brinkley-Cook, a Sports Illustrated model, has chosen to quickly step in with hours to learn the entire routine and will compete in her mother’s place for the remainder of the season. We wish Christie a full and speedy recovery and look forward to seeing her in the audience, whenever possible, proudly supporting Sailor.”

This seems to have been a very last-minute decision, considering how excited Brinkley was to compete in DWTS' premiere episode just hours ago. Late on Sunday, Sept. 15, the actor posted photos of herself shimmy-ing in her first ballroom costume of the competition. "I’m so excited for tomorrow’s show," she exclaimed.

Although having to pull out of the show must be slightly devastating, Brinkley is handling it with a great sense of humor. "Showbiz is all about getting a break, and Sailor and I both got one on 'Dancing with the Stars' this season," Brinkley said in a statement to Good Morning America, joking about her injury. "Sailor joined the cast when I got mine … ouch somebody stop me, it hurts to laugh!"

Brinkley-Cook decided to step into her mom's place for one special reason. "I'm doing this mostly for my mom! I just want to make her happy and make her proud," she told GMA. "She loved doing this, she loves dancing and she loves performing and getting hurt was her worst nightmare."

But with literally hours to learn the first routine, Brinkley-Cook is looking at the experience as a personal challenge now as well. "I felt this high of just attacking something I was so afraid of and it felt like something I need to do. I think it will change me." What won't change is Brinkley's first performance outfit: it fits her daughter perfectly, with no alterations needed, according to GMA.

While fans may be disappointed to learn that Brinkley won't be able to compete, they'll have someone to root for with her daughter, who has earned the "star" title in her own right. The 21-year-old started modeling at 15, posing in a Claire's campaign and on the cover of Bella alongside her mom, per Refinery 29. Now, she's working it in the pages of Sports Illustrated and making waves in the modeling world.

Brinkley-Cook will now be competing against the likes of Karamo Brown, Ally Brooke, Hannah Brown, and Lamar Odom in the ballroom. The new season of Dancing with the Stars premieres Monday, Sept. 16, on ABC.

More like this
Andy Cohen Apologized To Larsa Pippen After A 'RHOM' Season 5 Reunion Dust-Up
By Brad Witter
We Finally Have Some Answers To How Heather Gay Got A Black Eye On 'RHOSLC'
By Samantha Rollins
Hannah Ann Got Engaged 3 Years After 'The Bachelor' & The Proposal Was Dreamy
By Grace Wehniainen
10 Photos Of The Wildest Limo Arrivals From 'The Bachelor' Premiere
By Brad Witter
Get Even More From Bustle — Sign Up For The Newsletter
From hair trends to relationship advice, our daily newsletter has everything you need to sound like a person who’s on TikTok, even if you aren’t.