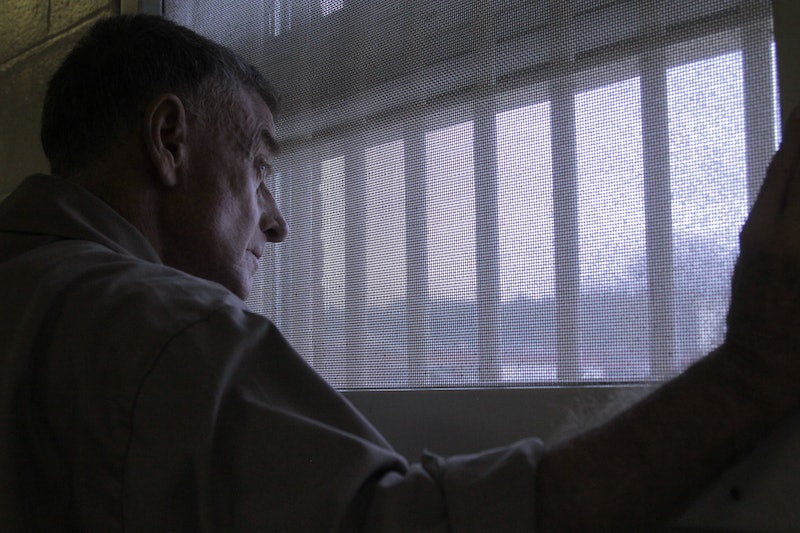 Part of what makes the Netflix docuseries The Staircase, premiering on June 8, so compelling is that some opinions of the case have evolved over the years, even for those directly involved. One of the key figures who caused the case to be reevaluated is Duane Deaver, who testified against Michael Peterson. The documentary series highlights certain flaws in the criminal justice system, including how one person can influence a verdict — for better or for worse.

Per the Associate Press, Deaver's testimony for the prosecution contributed to Michael Peterson being found guilty of first-degree murder in 2003, for the 2001 death of his wife, Kathleen. Peterson claimed that his wife fell down the staircase in their home, but Deaver, a State Bureau of Investigation agent, testified that the blood spatter from Kathleen's death indicated that she had not died from fall, but had instead been beaten to death. However, this specific testimony was called into question when Deaver was fired from the State Bureau of Investigation for allegedly falsely reporting blood evidence in major trials, according to WRAL.

The Triad City Beat explained that the revelation that Deaver's blood evidence might be unreliable came up first not as a result of the Peterson trial, but during a hearing for a man who had been sentenced to life in prison based on evidence presented by the State Bureau of Investigation. Greg Taylor, who had been convicted of murdering a sex worker in 1993, had his case reevaluated when another man confessed to the killing, per Triad City Beat.

At Taylor's innocence hearing in 2010, Deaver was present to answer for the SBI's role in the original trial. The prosecution claimed that blood found on his truck connected Taylor and the victim, Jacquetta Thomas, while reports from the SBI serology lab indicated that the sample didn't contain any blood at all. Deaver claimed that the SBI and the State of North Carolina had been withholding blood evidence from defense attorneys, not just in the case of Taylor but throughout North Carolina, per Triad City Beat, and that he was following their policy.

This statement led to the discovery that the SBI either withheld evidence or misrepresented available evidence in over 200 cases, according to The News & Observer. This scandal caught up with the Peterson case in 2011. That Deaver's possibly inaccurate testimony that the physical evidence indicated that Kathleen Peterson had been murdered figured into the jury's final decision prompted the decision to grant Michael Peterson a new trial.

Deaver's firing in 2011 may have been good news for Michael Peterson, but Deaver has been pushing back against his firing since then. In 2014, a hearing was held regarding whether or not Deaver's firing should be overturned, per The News & Observer. Deaver's attorney argued that the agent was a scapegoat for larger SBI failings. However, in the end the decision to fire Deaver was upheld, with judge James L. Conner II writing, "It may well be that others at the SBI should also have been terminated or otherwise disciplined. However, the evidence for [Deaver] fell far short of showing disparate treatment."

Later that year, however, The State Human Resources Commission determined that Deaver had been wrongly terminated, and ordered his former employers to award him his backpay, per WRAL News. However, the commission also ruled that Deaver could have been rightly terminated in 2013 when a state appeals court upheld the ruling that he had misled the jury in the Peterson case; thus he was not re-hired permanently.

The Winston-Salem Journal reported last year that Kirk Turner, who was acquitted of a murder charge, had sued Deaver, another SBI analyst, and several other defendants for allegedly manufacturing evidence used against him in his trial. The case was set to be heard sometime in 2018.

Deaver has otherwise stayed out of the public eye, but the release of The Staircase will see his contributions to the complicated case of Kathleen Peterson being examined all over again.