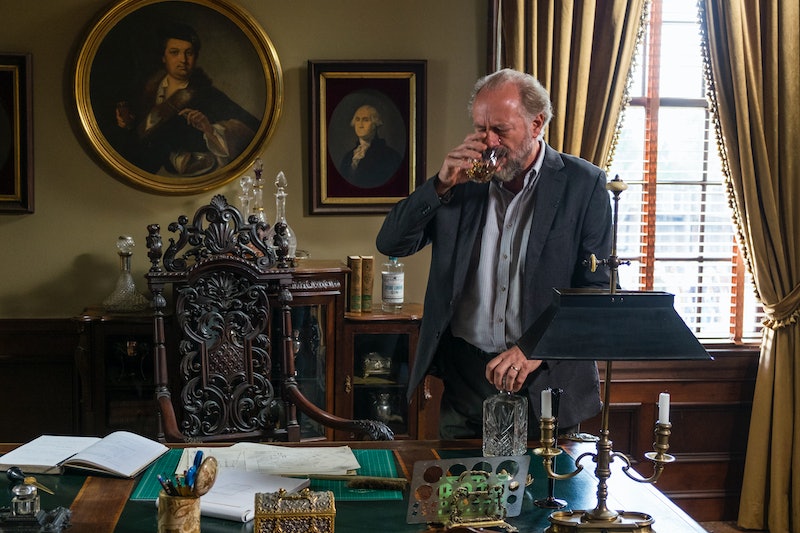 Betrayal abounded throughout the Walking Dead Season 6 finale, but not from the one character I most expected to partake in backstabbing. What happened to Gregory on The Walking Dead? He wasn't with Maggie when Hilltop and the Kingdom came to the rescue, and that's mighty suspect if you ask me — especially considering what he was last seen doing.

Gregory may have chickened out in his attempt to murder Maggie, but his authority is still threatened by her. He also has a hand-written note from Simon that apparently grants him asylum at the Sanctuary. Maybe that's where he was headed during that big stand-off. In the penultimate episode, he packed a bag for a road trip with his associate Kal.

The most likely answer to where Gregory was during the Walking Dead finale is on that trip to the Sanctuary. I find it hard to believe that Gregory would give up his lovely historic home. However, people aim for post-apocalyptic survival in surprising ways. Priorities change. Maybe he figured Negan offered him even more security. Maybe he went there for combat lessons, or backup. Maybe he was the "little bird" who warned him of the attack plans, which is what happened in the comics.

The timing that concerns me too. We should have at least seen Gregory at the end of the episode, if he was the mole. If he's not with the Saviors, what's taking him so long? Perhaps he and Kal were kidnapped on the road, or ambushed. This is such a thread.

What's going to happen at the Hilltop if they return, and Gregory isn't there? Will Maggie just take over? Will someone else? There may still be people there who are loyal to their original leader and the old ways. Gregory leaving is just the beginning.

During that finale, I kept waiting for that shoe to drop, but it never did. Gregory never popped out and attacked Maggie. Don't get me wrong, I'm glad, but it is concerning. Gregory is going to find his courage eventually, and not in a heroic way. I suppose we'll have to remain in suspense as ever on The Walking Dead.