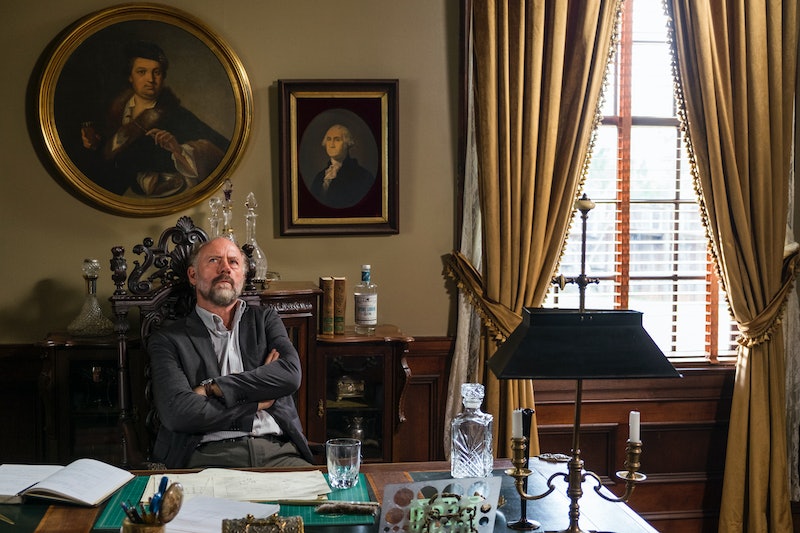 With only one episode left in The Walking Dead Season 7, the death count is surely about to rapidly rise and I truly hope that Gregory is one of the next people to go. If there’s anything we've learned in the second half of the season, it’s that Gregory does not know how to be a leader. And it seems like he may actually be siding with the Saviors. In the March 26 episode, he even contemplated killing Maggie, before proving unable to kill a walker. Between his erratic behavior, shifting allegiances, and inability to defend himself, I can't be the only one convinced that Gregory will die on The Walking Dead. In order to get some more insight as to whether this prediction is true, we need to turn to the comics.

Lately, it seems like Gregory really has no control over the people of Hilltop, and no idea of how to reign them back in. He's threatened Jesus, telling him that if he doesn’t put the newbies to work, Gregory will tell the Saviors. He’s so threatened by Maggie and her power over the Hilltop that he toyed with the idea of killing her in the middle of a meeting asking if they can work together.

He's lucky he didn't actually attack Maggie, because there's no way he would have lived past that. But just because he reconsidered that, doesn't mean he's safe. Potential spoilers from the Walking Dead comics ahead.

Yes, Gregory does eventually die in the comic book version of The Walking Dead, but it’s not right at this moment. Unfortunately, Gregory makes it through the war. Around the AMC series' current timeline, the comic version of Gregory leaves Hilltop and makes his way to the Sanctuary to warn Negan that Rick, Jesus, and Ezekiel are coming with an army. Negan is ready for the attack and threatens the army, giving Hilltop members one more chance to back out, which some people take.

Gregory brings the deserters back home with him and declares himself a hero for saving them from war. Not to mention, he blames Rick for tearing everyone apart. This causes Maggie to punch him in the face.

Maggie then rallies the Hilltop and overthrows Gregory as their leader.

Gregory becomes a real jerk after the war — just when it seemed like he couldn't get any worse. He says he wants to meet with Maggie to talk things over and discuss plans, but when she gets there, he poisons her wine and tries to kill her. They throw him in jail until Maggie ultimately decides that he needs to die. The Hilltop group ends up hanging Gregory for all to see.

We'll have to wait and see if The Walking Dead chooses to follow this route, move Gregory's death up, or let him live. But no matter his ultimate fate, I just hope we get to see Maggie punch him in the face on the AMC series.