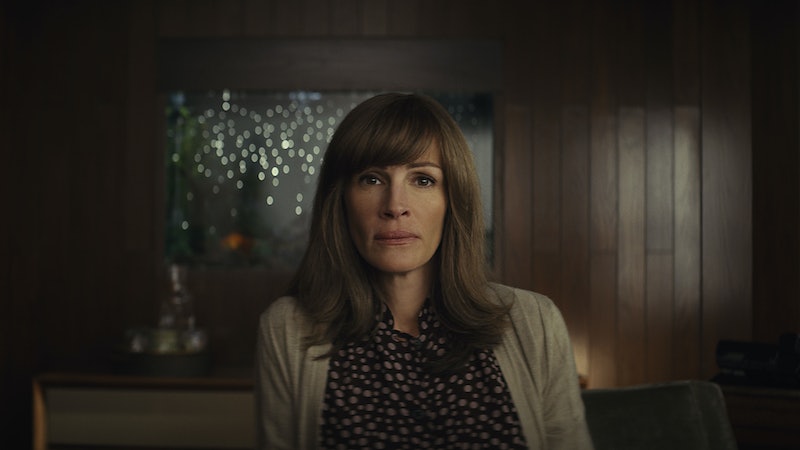 Spoilers ahead for Homecoming Season 1. As some viewers may know, Amazon's new thriller, Homecoming, is an adaptation of Gimlet Media's podcast of the same name. And while it features the same characters and basic plot, there are some major changes — Julia Roberts' character being one of them. So what happened to Heidi in the Homecoming podcast, and how does it differ from what happens to her in the show?

In both versions, Heidi is a well-meaning therapist at a treatment center for U.S. veterans. She's told her job is to help soldiers target traumatic memories, while an experimental medication they're being secretly dosed with will remove the negative feelings they associate with those memories. However, as Heidi begins to get close to one of her patients, Walter Cruz, she discovers that the drug is actually erasing the soldiers' war memories completely so that they can be continuously redeployed — almost like emotionless robots. Heidi can't stomach what she has unintentionally done to these people, and she takes drastic measures to put a stop to the program.

After learning that Walter is about to be sent back overseas, Heidi decides to ensure he won't be. She brings him to the cafeteria, where the pair each eat a giant plate of gnocchi laced with the memory-loss medication. It marks Walter's second helping, not only wiping his memory, but rendering him unfit for a second tour of duty. Heidi, meanwhile, moves back home with her mother, and is left with only vague recollections of her time at Homecoming. That's why, when an agent from the Department of Defense shows up to interrogate her, or when her old boss, Colin Belfast, comes back into her life, she has no idea who they are or what they're talking about.

Up to this point, Heidi's path is the same on both the podcast and in the Amazon adaptation. And in both versions of the story, her memory is triggered by the screeching of a bird that used to nest right outside her office window. But from there, things start to differ drastically.

In the podcast, Heidi launches on a long and convoluted quest to find Walter before the Geist executives — who run Homecoming — can get to him. She visits his mother, tracks him down to California, and even goes to a shooting range where he was suspected to have frequented. Through it all, she works simultaneously with Audrey Temple, a Geist Executive, and her old boss (the aforementioned Colin), trying to play the two off one another in order to find Walter. It's a journey that takes up quite a few episodes in the podcast, making it all a bit harder to follow.

By the podcast's Season 2 finale, Heidi still hasn't managed to find Walter. Colin has been forced to take the fall for everything that happened at Homecoming (which also happens in the show) and Heidi is left on her own, with only a cell phone given to her by Walter's mother on which Walter occasionally leaves voicemails.

In the television adaptation, the ending is completely different. Heidi does manage to find Walter, who seems to be following the path of the road trip that he and Heidi had planned in their sessions. But sadly, Walter seems to have no memory of Heidi at all. They share a friendly chat at a diner before Walter heads back to his cabin, with Heidi looking on.

"We've deviated from very much of the podcast, so [season two of] the podcast doesn't really have anything to do with the way the show is going," director Sam Esmail told The Hollywood Reporter of the differences between the podcast and the show. "We're working on a second season, but we have a very different trajectory for our show. I think when I signed on, I had only listened to the first six episodes of the podcast, which is the first season, and then from there we deviated completely. The show starts out fairly close to the podcast, and in the back half of the season we really start to see the major shifts and differences from the podcast."

So fans of both the podcast and the show can expect to see even more dramatic departures as the series progresses. But that makes it kind of like a twofer— two awesome, different stories for the price of one. We can't predict what the future holds for Heidi and Walter, but we can expect two different versions.