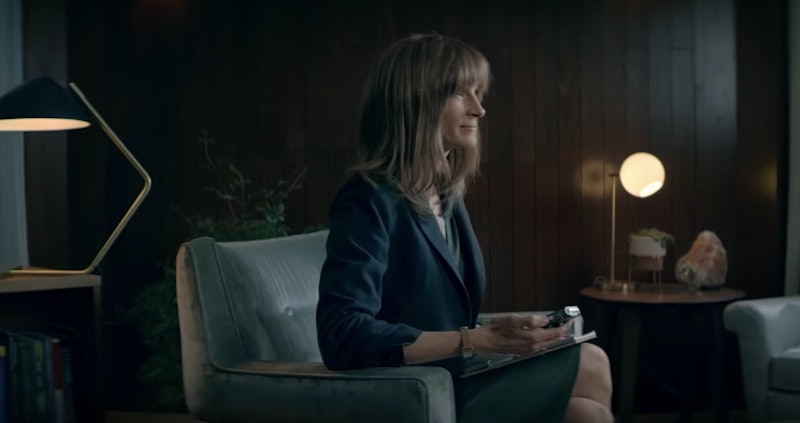 It seems like only a visionary like Sam Esmail, the Emmy-nominated creator of Mr. Robot, could get an Oscar winner like Julia Roberts to officially do a TV show. Because, by the way, that's actually happening. The teaser for Julia Roberts' TV show Homecoming was just released, and even though it's only a minute long, you'll instantly be hooked. The series will be directed by Esmail for Amazon Prime, which is currently the home of cult hits The Marvelous Mrs. Maisel and Transparent, among other shows. It's Roberts' first notable television role in more than 20 years, and her first starring TV role ever.

Fans hoping to learn more about Homecoming won't really get it from this trailer, which is definitely the teaser to beat all teasers. Roberts is barely in it, save for one line towards the end. It doesn't even hint at the rest of the cast, which is stacked! According to The Wrap, actors starring alongside Roberts include Bobby Cannavale, Dermot Mulroney, Sissy Spacek, and Alex Karpovsky, aka Ray from Girls. For real. Also, if the name Homecoming sounds familiar, it's actually based on the popular Homecoming podcast.

So, Julia Roberts is starring in an Amazon Prime series based on a podcast. And it looks good. Check out the first teaser for Homecoming:

So much... and yet so little, right? Homecoming is described as a "psychological thriller," but it's so much more than that. Roberts plays a caseworker named Heidi Bergman, who may be hiding her demons behind her ultra-calm facade. Per The Wrap:

"[The teaser] explores the abandoned halls of what we can safely assume is the titular Homecoming Transitional Support Center where Heidi works, a Geist Group facility helping soldiers transition back to civilian life."

Okay, that doesn't sound so spooky. They further explain that Cannavale's character oversees Roberts and the Homecoming facility, but "his manic demands point to questionable motives". Sounds like basic bureaucratic negligence, until the show's description jumps ahead in time.

Four years later, Heidi has started a new life, living with her mother (Sissy Spacek) and working as a small-town waitress, when a Department of Defense auditor (Shea Whigham) comes to her with questions about why she left the Homecoming facility.

Uh-oh. Ultimately, "Heidi begins to realize that there’s a whole other story behind the story she’s been telling herself," and that's when the psychological thriller element kicks in. It's not clear if the story will be told in a linear fashion, or jump back in time with flashbacks — or be total anarchy, like FX's Legion — but it should be absolutely fascinating to watch. Not least of all because it seems as if Roberts, America's sweetheart eternal, may be exploring an anti-hero role in a significant way for the first time.

It's worth noting that this is Julia Roberts' first starring television series role, and it's for a streaming service. Back in 2014, she was in HBO film The Normal Heart, but that's not exactly the same as a TV show. You'd be forgiven for forgetting the last time she appeared on television before that, as it was in a 2003 miniseries about the history of America and featured a whopping 20 Oscar winners in its cast.

She did a string of TV cameos in the '90s, appearing in series like Friends, Law & Order, and Murphy Brown, in which she appeared as herself. So yeah, Homecoming is a pretty big deal. It's also been the first time in what feels like forever that Roberts has taken on a front-and-center role, instead of just providing voiceovers or playing someone's mom. Welcome back to the world of drama, Julia Roberts — Homecoming premieres in November 2018.