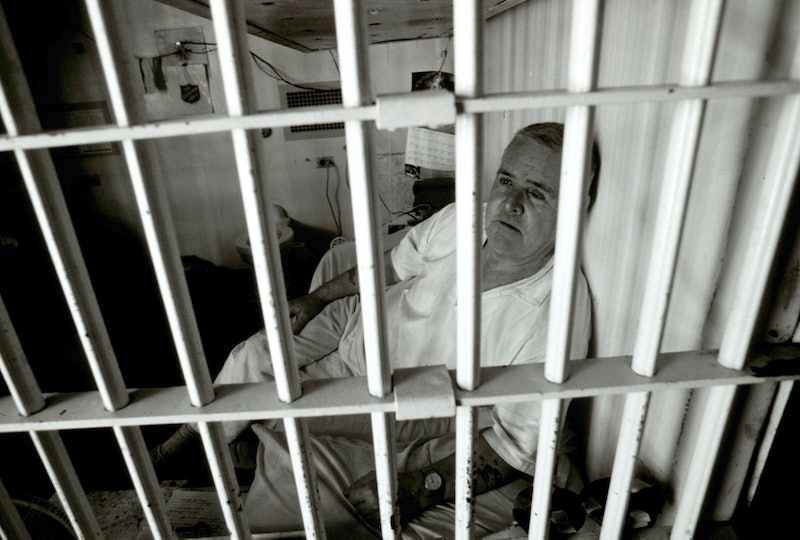 In the early 1980s, Henry Lee Lucas was the serial killer of the century, confessing to as many as 600 murders in 26 states during the first two years he was held in custody. When journalists eventually exposed many of those avowals as fraudulent in 1985, the wheels of justice were already turning. The Netflix limited series The Confession Killer, which premieres Dec. 6, combines archival footage with fresh interviews to tell the story of Lucas’s eventual conviction in the case of “Orange Socks,” a hitchhiker whose identity was only confirmed in 2019. Lucas was still serving his sentence for that crime when he died in 2001 of congenital heart failure.

That it was a heart attack at the age of 64 that killed Henry Lee Lucas and not a lethal injection all comes down to one unexpected boldface name — George W. Bush. In 1982, Lucas told Texas police he killed Orange Socks when she refused him sex, then he raped her corpse. Armed solely with this confession — no physical evidence, no witnesses— prosecuting attorney Ed Walsh secured the death penalty for Lucas, who was already serving a life sentence for the murder of his girlfriend. The jury deliberated for just 45 minutes.

Despite recanting his confession to every murder with the exception of his own mother, Henry Lee Lucas spent the next three years on death row. But while he was serving the numerous life terms he’d racked up, journalists were busy investigating his temerarious confessions. At Lucas's prodding, The Dallas Times Herald reporter Hugh Aynesworth went to Florida to confirm Lucas had been living and working there when Orange Socks was murdered in Abilene, Texas. "I guess it was there — with the realization that no reasonable investigation had been made — that I began to believe Lucas' story that the whole thing was a massive hoax," Aynesworth wrote.

Still, the wheel of justice rolled on. In October 1990, courts set a lethal injection date for Lucas of December 3. On December 1, the injection was indefinitely delayed by a Texas state appeals court. The threat of death would loom over Lucas until 1998.

With days to go before his June 30 injection date, then-Governor George W. Bush became Lucas’s unlikely savior. In a tenure that saw 152 inmates put to death, Lucas’s death sentence was the only one that the future president commuted.

''As a supporter of the death penalty for those who commit horrible crimes,'' Mr. Bush said in a statement at the time, ''I feel a special obligation to make sure the State of Texas never executes a person for a crime they may not have committed. I take this action so that all Texans can continue to trust the integrity and fairness of our criminal justice system.''

“I can only thank them for believing the truth and having guts enough for standing up for what’s right,” Lucas said in response, according to the Los Angeles Times.

Henry Lee Lucas would spend the rest of his life in jail. On March 12, 2001, he complained of chest pains and eventually succumbed to a heart attack in the prison infirmary. It was two months since George Bush assumed the presidency and 18 years before DNA testing would confirm Orange Socks’s identity as that of 23-year-old Debra Jackson. Her murder remains unsolved.