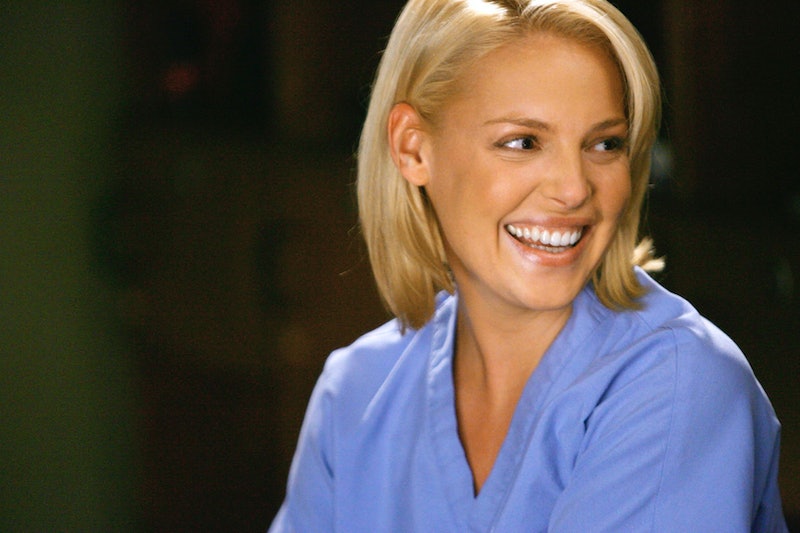 The Grey’s Anatomy 300th episode was chock full of amazing references to the ghosts of Grey’s Anatomy past, but one of the most satisfying ones was the arrival of three injured interns that looked just like George, Cristina, and Izzie. The resemblance was so uncanny that the doctors at Grey Sloan were a little distracted, not least of all Alex, who was mentally sent back in time to the period when he knew Izzie and loved her immensely. What happened to Izzie on Grey's Anatomy? Alex imagined a great life for Izzie, and it was a really sweet moment, considering how bad things were when these two split up.

Alex and Izzie had their ups and downs on the show — they dated, he cheated, they split, she went to Denny, Denny died, they got back together, they got married, she had brain cancer, she went AWOL and bailed on Alex. Izzie was last seen in Season 6, Episode 12, after she decided she couldn’t be with Alex, so it’s been almost eight whole seasons without her. And though he’s moved on with Jo and has a pretty happy life, Alex had to wonder a bit about where Izzie was and what she was doing post-brain cancer, and so, as he told Jo, he made up a story of his own about Izzie’s whereabouts. It’s natural to think about one of the loves of your life, and Alex’s story for her is pretty sweet. He tells Jo:

I don’t need to call her. I know how she is. She’s married with three kids, and she lives somewhere, I think, uh, kind of woodsy? And she’s a surgeon and she goes to work every day, so she refuses to hire help so her house is always a mess, and it has Christmas decorations all over it because she won’t let her husband take them down. It smells like muffins, and she’s, she’s smiling. When I picture her, she’s always smiling. I don’t need to call her because I want it to stay that way. I picture her as happy as I am with you… It’s way better than wondering.

Alex is right in this regard — making up a story is better than the truth, because the truth can have some ugly facets. Izzie and Alex didn’t exactly end things well — she was fired from the Grey Sloan surgical program, and she thought that Alex was to blame, so she wrote him a letter and bounced. Turns out he didn’t have anything to do with her losing her job, but the damage was done — when Izzie came back for a mea culpa, Alex was all like, “I deserve better than this but I’m glad you don’t have cancer.” They got divorced, but here’s the twist — when Alex got shot in the Season 6 finale, he asked for Izzie, and, thinking that Lexie was Izzie, he told “Izzie” not to leave him. Woops. Didn't sound like he was over it then, did it?

Thus, given their history, it’s actually a step up that Alex is satisfied in his Izzie story. He doesn’t feel the need to rekindle or even touch base with her — he is happy at Grey Sloan, with Jo by his side and Meredith as his friend, and that’s all it is to it. A far cry from the playboy from Season 1, huh? It’s nice that Grey’s Anatomy decided to give Izzie and Alex’s love story a shout out in the 300th episode, but it was smart not to bring it too far forward. Izzie and Alex are in the past, and that’s definitely where they should stay (even if a guy can’t help but wonder).