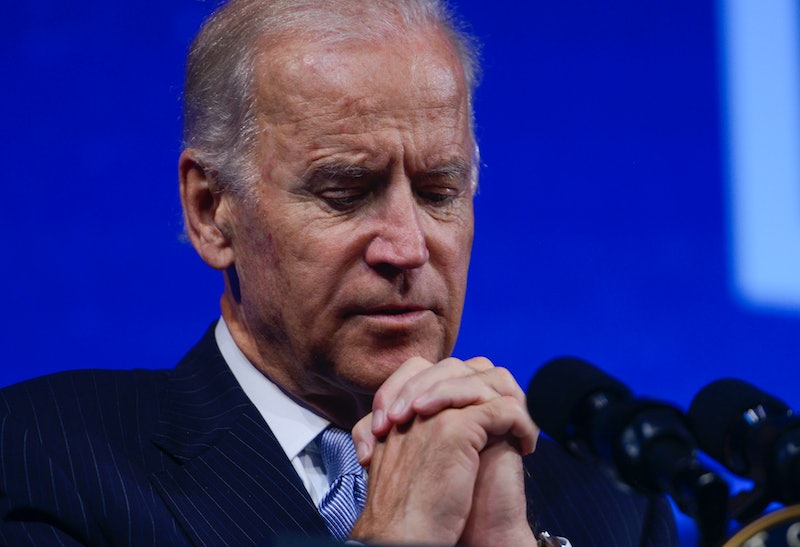 It's still unclear whether Vice President Joe Biden will run for president in 2016, but the Draft Biden super PAC released a new ad on the Today show Wednesday morning encouraging him to enter the race. The video, titled "Joe Biden — My Redemption," will also air on CNN before the first Democratic primary debate Tuesday. Unlike typical political ads, which describe why a candidate would be an excellent leader, Draft Biden's new ad features the emotional speech Biden gave at Yale University's graduation ceremony in May. In the speech, given days before his son Beau died of brain cancer, he talks about losing his first wife, Neilia, and his 13-month-old daughter. Because the ad focuses so heavily on the tragedy, it has many people wondering: What happened to Biden's first wife and daughter?

Biden met Neilia in 1964, during a spring break trip to the Bahamas while he was still a law student at Syracuse University. They married two years later, and had three children together — Beau, Hunter, and Naomi. Just six weeks after Biden was elected senator from Delaware in November 1972, Neilia and the children were in a car accident while shopping for a Christmas tree. In his Yale commencement speech, Biden described the tragedy, saying:

Six weeks after my election, my whole world was altered forever. While I was in Washington hiring staff, I got a phone call. My wife and three children were Christmas shopping, a tractor trailer broadsided them and killed my wife and killed my daughter. And they weren’t sure that my sons would live.

Beau and Hunter, almost 3 and 4 years old at the time, spent months in the hospital, and Biden was sworn into the Senate from their hospital room. While seeing black-and-white photos of Biden's swearing-in ceremony in the Draft Biden ad, you hear Biden say:

The incredible bond I have with my children is the gift I’m not sure I would have had, had I not been through what I went through. But by focusing on my sons, I found my redemption.

As his sons recovered, Biden commuted from their home in Delaware to Washington on Amtrak every day, and continued to do so for the 36 years that he served as a senator, leading to the nickname "Amtrak Joe."

Five years after the accident, Biden married his current wife, Jill, and they had a daughter together — Ashley, who's now 34. Beau, a popular Democratic politician in Delaware, died of brain cancer in May at the age of 46.