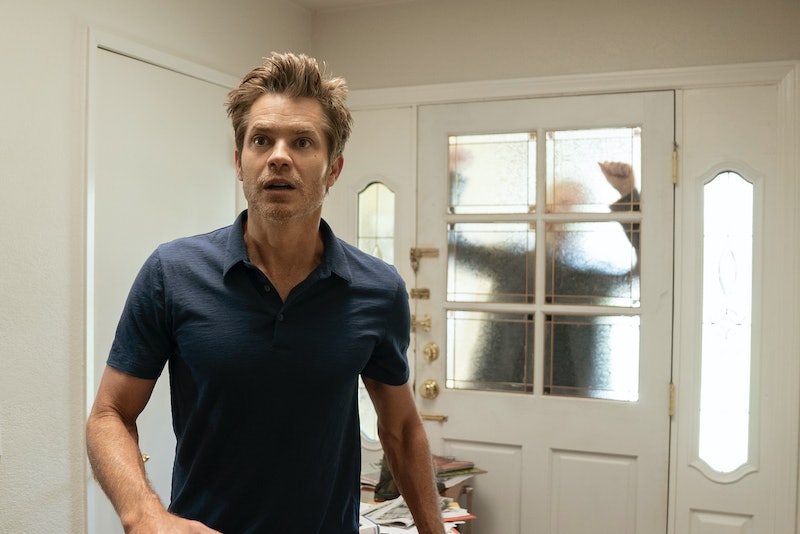 Spoilers ahead for Santa Clarita Diet Season 3. We need to talk about what happened to Joel in the Santa Clarita Diet Season 3 finale, because OMG. After a season-long struggle to decide whether or not he wants to become a zombie and live for eternity with Sheila, Joel pretty much had no say in the matter because Mr. Ball Legs crawled inside Joel's ear and killed him. Sheila panicked and bit Joel to zombify him and keep him alive, and that's how the season ended. Santa Clarita Diet hasn't been renewed for Season 4 yet, but wow does it need to in order to explain that cliffhanger.

Mr. Ball Legs first made an appearance in Santa Clarita Diet Season 2. He was born from the red ball that all zombies throw up, and Ramona's grew legs when she left it at room temperature for long enough. Sheila's ball was frozen, but when she saw the bond Ramona had with her ball, Sheila and Joel decided it was OK to defrost hers. (Well, Joel was very much not OK with it, but he was trying to be supportive.) Sheila's soon grew legs, too, and was super responsive to her — likely because he was her own Mr. Ball Legs instead of Ramona's. However, Mr. Ball Legs is now seemingly gone because he crawled inside Joel's ear and didn't reappear. But while that move seemingly killed Joel, it didn't seem born out of a desire to kill him.

Minutes before, Joel had just excitedly confirmed to Sheila that he was willing to become a zombie with her and live their days out together. The more Joel spoke, the more excited Mr. Ball Legs (perched on Sheila's shoulder) got. When Joel's speech was over, the ball jumped over to Joel's shoulder and playfully put his legs on Joel's face like a puppy would put his paws on its owner. The ball seemed happy that Joel was choosing what Sheila wanted. And... then Mr. Ball Legs killed Joel by climbing into his skull. But now that Sheila zombified Joel, there are a lot of questions heading into a possible Season 4.

For one, does Mr. Ball Legs control Joel now? Right before Joel died, he uttered the word "mama" to Sheila, the same word she'd been trying to get Mr. Ball Legs to say. Is the ball sitting in Joel's brain calling the shots? If so, Joel will basically become a puppet for Sheila's desires since Mr. Ball Legs is connected to Sheila and mostly looking out for her, it seems.

If Joel is still Joel, though, where did Mr. Ball Legs go? Will Joel throw up two balls when his zombie transformation is complete? Will he throw up only Sheila's which will then be some sort of hybrid Mr. Ball Legs for the two of them? Who knew a strange red ball with legs would drive so much of the plot of this show.

However, it wasn't too surprising that Mr. Ball Legs decided to go rogue. Ever since Sheila defrosted him, he'd been getting more and more outgoing. At one point, he escaped his cage and almost revealed Sheila's undead status to the leader of the Knights of Serbia. Honestly, it was only a matter of time before he crawled in someone's ear, and Joel was a target from the start.

As Hidden Remote pointed out, when Sheila first defrosted the ball, it lunged at Joel, trying to attach to him. The ball's always had a thing for him — it just remains to be seen if it's a good thing or a bad thing. Maybe the ball could sense how much Sheila loves Joel and wanted to be part of that. Maybe he's jealous of Joel and intentionally tried to kill him. It's hard to know until Season 4, but at least the creepy-but-cute pet will continue to be a big part of the story. It wouldn't be Santa Clarita Diet without Mr. Ball Legs.

More like this
This Tiny Clue In 'Wednesday' Foreshadowed That Season Finale Twist
By Grace Wehniainen
Everything To Know About 'Money Heist: Korea' Part 3
By Gretchen Smail
At 14, Pauline Chalamet Fell In Love & Danced ‘The Nutcracker’
By Grace Wehniainen
‘The Mosquito Coast’ Book Ending Includes A Major Character’s Death
By Brad Witter
Get Even More From Bustle — Sign Up For The Newsletter