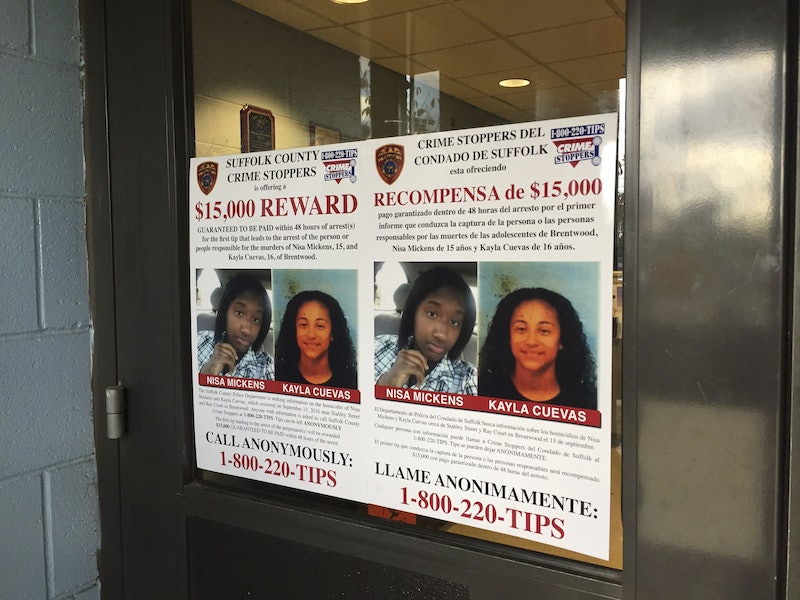 President Donald Trump has made his beliefs on immigration no secret: He wants to limit it. One set of justifications he often brings up for his desired immigration crackdowns are violent acts committed by immigrants. This year, one of the stories he's focused on is what happened to Kayla Cuevas — and he's hosting her mother, Evelyn Rodriguez, as one of the guests at the State of the Union address.

Cuevas, at 16 years old, was murdered in what police suspect to have been an act of gang violence. She and her best friend Nisa Mickens, 15, were killed in the town of Brentwood, New York, in September 2016, when Donald Trump was only a presidential candidate. Only a week later, another two teenagers were murdered in the same town, and again police claimed that the gang MS-13 was responsible.

While the circumstances surrounding Cuevas' tragic murder brought a spotlight to the town, the local population has long lived in fear of MS-13. Brentwood has a significant immigrant population, and members of the gang are notoriously easy to anger — and quick to react to perceived slights, according to Timothy D. Sini, police commissioner for Brentwood and Suffolk County, who spoke to The New York Times.

The New York Times reported that Cuevas had been engaging in a feud with gang members at her high school and on social media, and prosecutors point to that as the reason why she and her best friend became targets. She's one of 17 Brentwood murder victims since January 2016 that Suffolk County police say died at the hands of MS-13 members, and the town's story did not escape the notice of then-candidate Donald Trump.

During his campaign, Trump rallied up many audiences with tough rhetoric about violence committed by illegal immigrants, and he turned his focus to Brentwood more specifically after becoming president. He gave a fiery speech there in July 2017, calling the gang members "animals" and promising to "dismantle, decimate and eradicate" the gangs at the root of so much violence.

However, critics of Trump's strategy towards MS-13 argue that his rhetoric ignores the roots of of the gang — and their connections to U.S. foreign policy. MS-13 was actually founded in L.A. by young people who had escaped the civil war in their native El Salvador — a civil war in which one side was heavily supported by the Reagan administration. When refugees arrived in the U.S. seeking asylum, the administration refused to recognize them as refugees and deported many of them, which set off waves of violence back in their countries of origin, thus bringing even more refugees trying to escape to the U.S.

Jeff Sessions went to Brentwood and met with Rodriguez in 2016, soon after Cuevas' murder. The New York Times reports that as Sessions declared war on the gang, Rodriguez used her meeting with him to argue that the school system needed increased funding in order to protect kids like Cuevas, who were in danger of running into trouble with the gang.

Cuevas' death, in the end, led her mother to be more deeply involved in her community's fight against gang violence. She's worked with police commissioner Sini and Barbara Medina, an advocate for victims of crime, and now the Times reports that she's also been invited to the White House, where she will meet with Trump.

"I'm not here for anybody's political gain," Rodriguez told The New York Times. "I just want what's right to be done. Everybody should put their political agenda aside and think about what's going on in our country."

Now that she's in Washington, Rodriguez would like to honor her daughter and bring hope to other kids like her.

"I'm not out for any type of gain for myself," she told The New York Times. "It's always been for the kids."