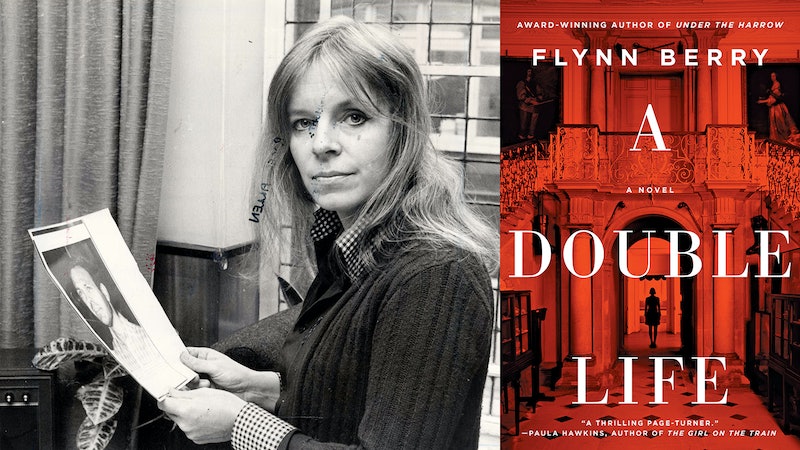 Each month, the Bustle Book Club asks an author to recommend a book they think everyone should read. In February, The Girl on the Train author Paula Hawkins recommended A Double Life by Flynn Berry. Follow along with the book club on Bustle and join the conversation on Goodreads. Enter now for a chance to win a book bundle that includes novels by both authors.

If you have been following along with the Bustle Book Club this month, then you may already know that February's pick A Double Life by Flynn Berry is inspired by an infamous true crime case that remains, to this day, unsolved. But what is the real story behind the thrilling novel? The truth about Lord Lucan's disappearance following the brutal murder of his family nanny truly sounds like something out of a thriller novel.

On Nov. 7, 1974, Veronica, the Dowager Countess of Lucan, appeared, bleeding and badly beaten, at the Plumbers Arms pub begging for help. She alleged that her nanny, Sandra Rivett, was just murdered in her nearby family home in London's affluent Belgravia district by the same man who viciously attacked and attempted to kill her: Lord Richard John Bingham, Seventh Earl of Lucan, Veronica's husband.

When the police arrived at the scene in the early hours of Nov. 8, Lucan was nowhere to be found. The borrowed car he was known to be driving turned up later that morning in Newhaven, but the Lord himself had vanished, along with any clues as to his whereabouts.

The most widely-accepted theory alleges that Lucan went to their family home on Nov. 7 to murder his wife, but in the dark basement, mistook Rivett for Veronica, killing his nanny first by mistake. The Lord had a documented history of domestic abuse, and was struggling under the weight of increasing debt and the looming possibility of bankruptcy. Veronica had just won custody of their three children in a heated court battled, and according to statements obtained by police by people close to Lucan, he had talked on more than one occasion about murdering his wife to ease his financial burden.

In the nearly 45 years since the events that fateful November night, Lord Lucan has never been found, and the truth about what really happened that night remains a mystery. Lucan's wife, Veronica, maintained that her estranged husband was responsible for Rivett's murder, as well the attack on her on life, until her death in 2017. But what ever happened to Lucan? The answer to that question may never have an answer, though plenty have tried to find it.

"I had known about the case for years because it's so widely reported in the British press. There are new newspaper articles every year about sightings of Lord Lucan, and I've always been fascinated by it," Flynn told Bustle in an interview about A Double Life. "It just seemed like this huge, rich story with elements of class and privilege and revenge and how women are treated by the courts. It was a story that always fascinated me."

Flynn is not alone in her fascination. Stories about Lucan continue to pop up in the media all the time, with everyone from true crime bloggers to Telegraph theorizing on what could have happened to the man dubbed "Lucky" Lucan by the press. Did he drown himself after committing the horrible crime, like one of his friend's assumed? Is he on another continent, living out a secret life where no one knows who he is or what 's done? Was he actually innocent of the crime, as his brother has said time and time again?

The fate of Lord Richard John Bingham, Seventh Earl of Lucan, may never be known, but one thing is for sure, the unsolved story will continue to fascinate true crime aficionados for years to come.

Enter now for a chance to win a book bundle that includes two novels by Paula Hawkins and A Double Life by Flynn Berry.