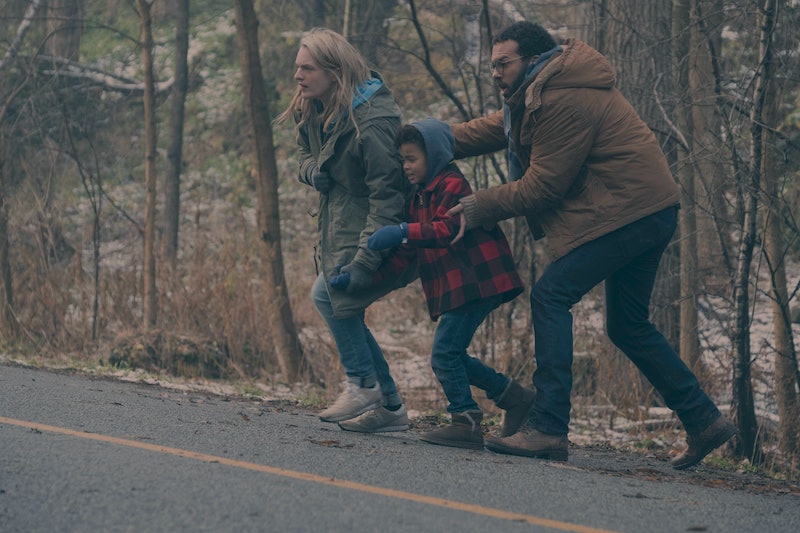 With Season 2 already on deck, it seems inevitable that The Handmaid's Tale will expand on, if not diverge from Margaret Atwood's novel. Little details have already been peppered in to modernize the story, but now it looks like we might find out what happened to Luke in The Handmaid's Tale based on the latest episode of the Hulu series. Could he have survived the attack? There are spoilers for The Handmaid's Tale ahead, only read on if you've seen the most recent episode and don't care about book spoilers.

In the book, Offred assumes that Luke is dead, and while she hopes that he may be out there one day and that they could reunite, his fate is never revealed. They never see each other again and she never gets word from him, as far as we know — though the epilogue does make it seem as though Offred had some kind of life after being a handmaid. The series, which has been almost completely shown from Offred's perspective up until this point, may offer an answer.

Episode 6 of the Hulu series presents an interesting possibility. At the end of the episode, after Offred puts everything on the line and tells the Mexican ambassador the truth about her new position as handmaid, the woman's assistant not only identified her as June, but told her that Luke was alive and that he could get a message to him. She writes something quickly on a notepad, putting her faith in this stranger.

Instantly, I was reminded of a similar-ish situation in the film 12 Years A Slave, in which Solomon Northup attempts to mail a letter to his family and is betrayed by someone who seemed trustworthy at the time. It's risky to trust anyone in a society like this, especially a man, and suspicious that he knew Offred's real name in the first place. I'm not sure which is crazier: someone looking for June ending up at her post, or an Eye entrapping her in such an elaborate way. If he can help her, it's probably good timing that Offred was already in a mood to throw caution to the wind.

Will June and Luke reunite, in Season 2 if not sooner? That would be incredible, though their daughter Hannah is still out there somewhere. I can't imagine how that poor child has been brainwashed by Gilead just in the small amount of time that she's been separated from her family. Not that it really matters in the long run, but also how will this affect Offred's relationship with Nick? I assume that this will play out like the Stark siblings in Game of Thrones, and that even if Luke is alive and trying to find his family, it will be a long time before it happens in The Handmaid's Tale — if ever.