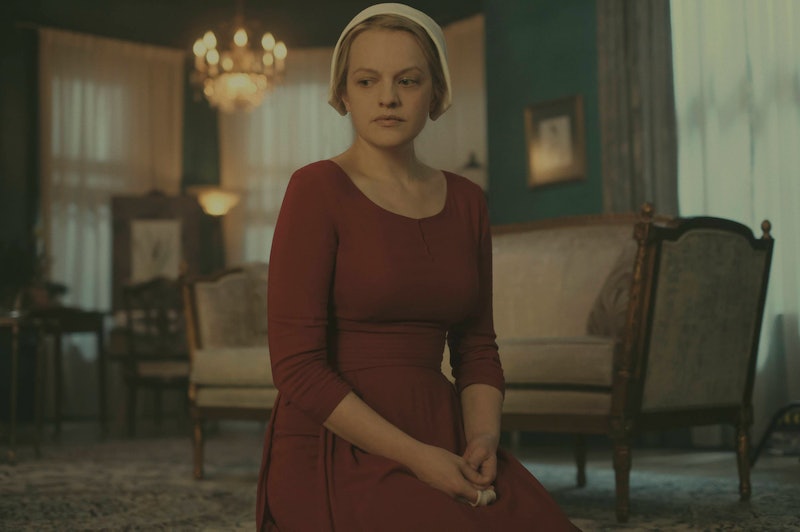 Only a handful of episodes in, The Handmaid's Tale has already proved itself as an incisive lens for real-world issues, re-imagining contemporary fears amid a totalitarian dystopia called Gilead. Though the series takes things to an extreme, it presents a chilling parallel to our own world by touching on the misogyny, homophobia, and rape culture that continue to plague modern society. Thus far, we've mostly seen its characters suffer in silence, but the Handmaid's Tale episode "Nolite Te Bastardes Carborundorum" makes the case for fighting back, and in a world where it often feels like our most basic rights are under siege, it's a potent reminder to press forward — even when things seem most bleak.

In protagonist Offred's world, fertile women are simultaneously powerful and powerless. Their bodies are consecrated, but their minds are cast aside, their only value contingent on their ability to bear children. Her case is, of course, a radical leap from the war on reproductive rights raging on today, but it's difficult to ignore how closely it mirrors the looming threat to women's body autonomy.

At first, Offred is depicted as submissive, obedient, broken. She goes through the motions of her day-to-day routine, detaching herself from reality and relying on the thought of finding her daughter as her only motive to tread onward. She explains that Gilead came to power because the country was "asleep," and initially, it seems she's still numb. But in the fourth episode of The Handmaid's Tale, she's shaken back to life — much in the way leftist America was jolted awake by Donald Trump's election.

After being banished to her room for weeks because she failed to get pregnant, Offred stumbles upon a phrase inscribed inside her closet door — a remnant from the woman who lived there before her: "Nolite Te Bastardes Carborundorum," which translates to "Don't let the bastards grind you down."

When she questions her commander about it during one of their clandestine Scrabble meetings, he reveals that the handmaid before her committed suicide to escape the misery of Gilead, and it's then that Offred sees a chance to reclaim what little control she still has. Emboldened by the imparting words of her predecessor, she convinces the guilt-ridden commander to lift her exile, capitalizing on his concern that she might suffer the same fate.

In the final moments of the episode, we see a triumphant Offred return to the outdoors, her fellow handmaids spilling into the road behind her as if to demonstrate their quiet solidarity. It plays like a visual representation of the phrase the former Offred left behind: "Nolite Te Bastardes Carborundorum," "Don't let the bastards grind you down."

Here, Offred's victory is a small one, but as we continue to make our own calls for progress, it serves as an empowering, perhaps necessary reminder that sometimes even the littlest strides can make the biggest difference. For many, Trump's election felt like a punch to the gut. His campaign was trailed by hateful, anti-feminist rhetoric, and his win rung out like a dispiriting wake-up call that sexism is far more alive than we may have wanted to think.

But, like Offred, we can learn a lot from the women who walked before us. This is far from the first time we've had to pick up the pieces in the wake of a patriarchal triumph, and if we can take anything away from Offred's story, it's that we can't back down in the face of defeat. No matter how powerless we feel, we have to push and claw and gouge for change with whatever means we have, even if it's inch by inch. It's how we got as far as we are now, and it's the only way we'll charge ahead.