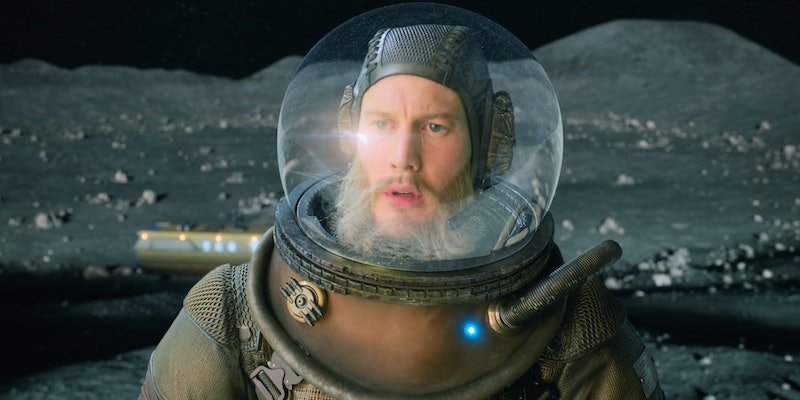 Spoilers ahead for The Umbrella Academy Season 1. A lot happened to the Hargreeves super-siblings after they went their separate ways, but Luther's physical transformation is possibly the most dramatic change. After getting seriously injured during an unspecified solo mission ordered by his father, he's given a mysterious serum b Pogo. By the end of Season 1, we still don't know what the serum is on The Umbrella Academy, but we do know that it alters Luther's life forever. He awakes with the large, muscular, hairy torso of a gorilla, leaving us all, understandably, with a lot of questions. Was that really the only way to save him? Was the serum made from Pogo's blood, or from the same experiment that anthropomorphized the Dr. Hargreeves? Towards the end of the series, Pogo says that Luther's blood is more compatible with his than a human's...so, who knows what's going on here.

It's clear that the serum is something Hargreeves just sort of had on hand, which is wild. Hargreeves did send Luther to the moon for four years shortly after transforming him. Maybe this was secretly preparation for that. Otherwise, it's not really specified what the serum is, what it was made out of, or why it saved Luther's life, in the series.

However, casual viewers who are familiar with superhero origin stories will certainly recognize the trope. The Marvel Cinematic Universe is lousy with serums and substances that turn the ordinary into the extraordinary — or dangerous — beings. In the case of The Umbrella Academy, Luther already had superhuman strength. The serum is just an added enhancement.

In The Umbrella Academy comics, Luther's supernatural transformation happens in a slightly different way. Hargreeves grafts his head onto the body of a genetically engineered ape from Mars, because sure, why not! This change in the TV adaptation is probably just meant to simplify things a bit.

Luther was the golden child of the family for most of his life. Unlike Vanya, Allison, Five, Ben, and Klaus, Hargreeves didn't traumatize Luther until he was already a full grown adult, but it was just as impactful. Even before Hargreeves used the serum on him and sent him to the moon, he was incredibly lonely.

"I loved that idea of someone being so huge in stature and looking so strong," actor Tom Hopper, who plays Luther, told Elle, "but inside he's so small and timid and sensitive and thoughtful and lonely. For me, it's so much more interesting playing a character like that as a big guy, than playing just a big man trying to be the tough guy — it's so much more interesting to play the opposite."

We may never know why Hargreeves decided that turning his only loyal son into a half-ape was the best way to save his life, but it happened. Chalk it up to one of the many mysteries surrounding this mean dad and his supernatural children. Perhaps, if and when The Umbrella Academy returns for Season 2, more will be revealed.