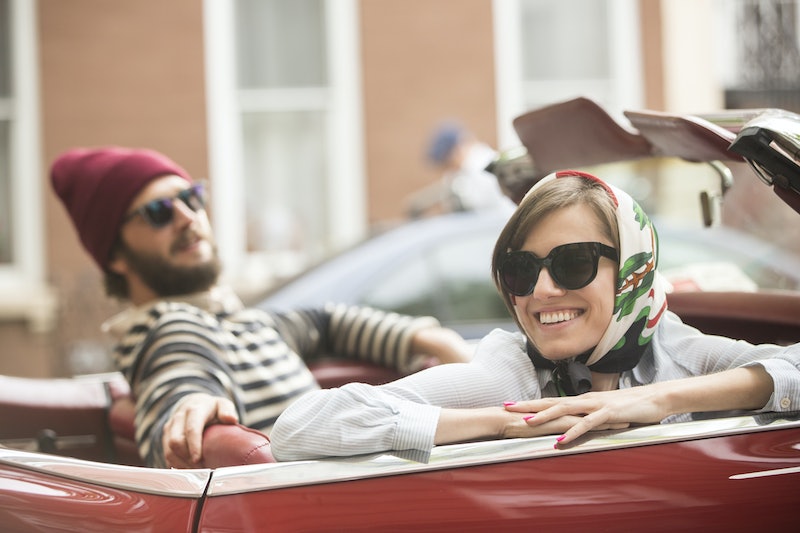 Marnie and Desi's relationship on Girls has never been simple. They first fell in love while Desi still had a girlfriend, continued dating under her nose, got married in what seemed like a trainwreck of a wedding, and decided to divorce shortly afterward. By the end of Season 5, Marnie had seemingly moved on with Ray, but if history is any indication, her romance with Desi is never really over. So where do Marnie and Desi stand in Girls Season 6?

As always, their relationship is hella complicated. The first episode's opening minutes make it pretty clear Marnie is still very much with Ray. In fact, he's essentially been living in her apartment for the last few months. But Marnie's online therapist is worried that she's falling into old patterns (she is), and Marnie asks Ray to find somewhere else to stay. Cue a tense conversation masked in forced smiles and way too many pet names about why it isn't appropriate for him to crash with Shoshanna — who, if you recall, Ray also dated — and he's off to whatever disastrous love den awaits him at Adam and Jessa's place. (It involves nudity, yogurt, and a whole lot of awkwardness).

Meanwhile, Marnie meets with Desi to go over their divorce. Is it a bad idea that they're rehashing their relationship alone on a bed? Probably. Nonetheless, there they are. For those that need a quick refresher as to how exactly they got to this point, let's review. In the Season 5 premiere, Marnie and Desi tied the knot in a WASP-meets-hipster countryside wedding that only Girls could pull off. Before they headed into the ceremony, they both experienced panicked breakdowns — Desi because he'd been engaged seven times (yes, seven) but never actually gotten married, and Marnie because, well, she's Marnie. Their reactions weren't great for two people about to, you know, commit their lives to one another, but anyway, they eventually made it to the altar.

They then enjoyed a blissful honeymoon in Ecuador before returning to Brooklyn, where they quickly fell into marital discord. After a particularly bitter argument, Marnie stormed out in search of space and randomly ran into her ex-boyfriend, Charlie. They briefly reconciled, forcing Marnie to take a hard look at her choices, and she marched back to find Desi and announce she wanted a divorce. He reluctantly agreed, but their professional lives were still entwined: The woman in charge of Grey's Anatomy's music wanted to use one of their songs on the show, and their manager advised they go on tour to promote it stat. Again, a terrible idea of epic proportions, but when aren't these characters making severely misguided decisions?

By the time the season closed, Desi had found an intolerable new girlfriend and Marnie had proclaimed her feelings for Ray, ostensibly putting an end to the misery that was the Desi-Marnie saga.

And that brings us back to the bed, where Desi and Marnie are recounting how much of a "s*it show" their tour was and dividing their things post-split. Unsurprisingly, they end up in a screaming match, but things somehow turn sentimental. Marnie admits she's not sure they can work through their issues as a folk duo and begins to question her talent as a musician, but Desi is impressively reassuring. "Before everything, before I even saw you as a woman, I saw you as an artist," he says. "You are a musical force." Marnie responds by thanking him for "seeing" her, and (gasp!) they start making out.

So basically, their relationship has gone full circle, except now Desi is the other man. Or maybe it's technically Ray, since Marnie and Desi are still married? Who even knows at this point. All that's clear is that Marnie's love life is yet again a mess, and she has some serious sh*t to work through if she wants to avoid repeating past mistakes. Here's to hoping she can figure things out by the time Girls goes off air.