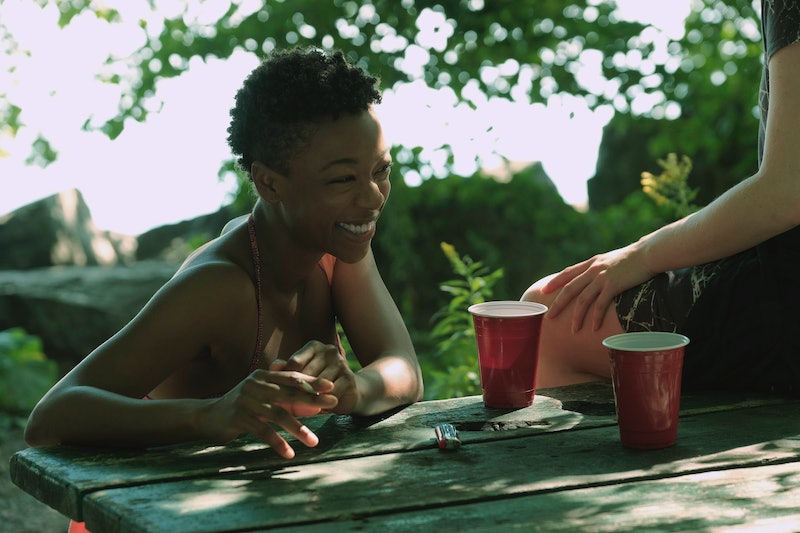 George Kraychyk/Hulu
By Lindsey Kupfer
May 3, 2017

The future of America seems pretty freaking bleak and we're only three episodes into Hulu’s The Handmaid’s Tale. In just those three episodes we’ve seen how Gilead was formed, glimpses of life before everything changed, Offred training at the Red Center and her present life as a handmaid at the Waterford’s home. While many of those memories are full of pain and suffering, the moments that all hold the most hope is the ones that include Moira. That is until Janine crushes that hope when she tells Offred that Moira is dead. So is Moira dead on The Handmaid’s Tale?

Now, the book could reveal her fate or it could not. We’ve already seen changes and variations from the original novel. So while it’s easy to speculate about what’s happening to Moira, we may in fact have no idea how the show will switch things up on us. For instance, Janine has both eyes in the book. I know, it was a weird and very random change-up. Janine never rebels at the Red Center and Ofglen has no backstory what-so-ever in the book. However, it’s always important to look at the book for clues into what could happen on the show. So does Moira make it out alive in the book version of The Handmaid’s Tale?

SPOILERS Below From The Handmaid’s Tale Book

You actually don’t know what ultimately happens to Moira at the end of the book. So frustrating, right? We do know that with where we are in the show, she is still alive. Offred will run into her one more time if the show is following the book, but after that we have no idea what happens to Moira. First, let’s rewind to the Red Center.

Moira makes it out of the Red Center alive and well. I know it seems impossible to get out under Aunt Lydia’s watchful eye, but Moira gets very crafty. In order to get out of that place, Moira disassembles a metal rod from one of the toilets and uses it to threaten one of the other Aunts. Moira forces her to take off her clothing before tying her to a pole. She then puts on the Aunt’s clothing and pretty much walks out of the center unharmed.

She then goes on the run for awhile. She’s taken in by a Quaker family who help her for a bit before getting her to the Underground Femaleroad, which helps women flee the country. They are just about to get her into a boat and out of Gilead when she’s captured by Eyes and taken away. She’s given the option to go to the Colonies, where women are forced to clean up radioactive spills and die within a few years or become a sex worker. Options are real bleak here, guys.

Moira ends up choosing the latter, working at a club they call Jezebel’s and that’s where Offred runs into her. I’m not going to explain why Offred ends up there, because that’s just spoiling too much fun, but the pair slip off to the bathroom, where Moira tells the whole story. When Offred leaves, she says, that’s the last time she would ever see Moira.

So her life is pretty much a mystery and leaves the door wide open for the TV show to mess around with her story. Maybe I’m overly optimistic, but I have faith Moira makes it out alive in the end. Fighters tend to live.