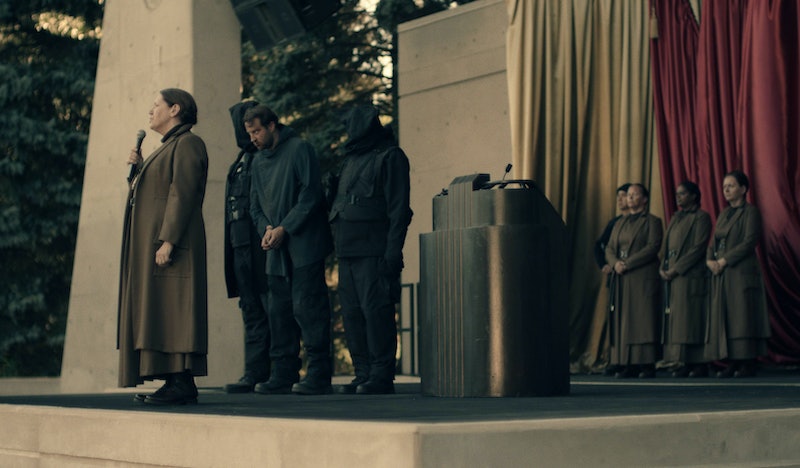 Everyone is talking about the newest dystopian TV drama. Hulu’s new show The Handmaid’s Tale is based off Margaret Atwood’s 1985 novel of the same name and it’s seriously terrifying. The story is about the collapse of modern government and the rise of a theocracy, a form of government that’s ruled by religion. In this theocracy, healthy women are forced to become concubines and bear children for rich families. People have been waiting for The Handmaid’s Tale premiere for months now and it’s just as creepy and brilliant as we’d hoped it would be. The big question of the series is how did America get to this point? How did this religious group take over and have the ability to create this dystopian society in The Handmaid's Tale? It’s actually not the most farfetched takeover.

Warning: There are SPOILERS below from both the Hulu show and The Handmaid’s Tale book

In both the book and the TV show, the Republic of Gilead takes place in what would be a New England town in the United States. The overthrow of the government and it’s subsequent repercussions takes place like rapid fire and begins with the bombing of congress. Correct me if I’m wrong, but isn’t this the exact kind of instance that Kiefer Sutherland was meant to be around for? I’m not sure where the designated survivor was in Margaret Atwood’s novel, but clearly they were also killed. So congress and all the government officials who run the country are wiped and they blame terrorists for the attack. Following the attack, the U.S. constitution is suspended and citizens are told it would be temporary.

Of course, the suspension isn’t temporary and the world starts falling into chaos.

The main character, Offred, attempts to use her credit card to buy coffee (it’s cigarettes in the book) and is declined. While at work, she keeps trying to call the credit card company to see why she’s been locked out of her account, but gets called into a work meeting where all women get fired from the company. The only explanation given from her boss is that he doesn't have a choice. The women are all escorted from the building by men that look like they’re in the military, but are clearly a part of the theocratic group. When Offred gets home, she learned that a new law has been enacted that women cannot own property. On top of that, only men are allowed access to bank accounts. She officially becomes dependent on her husband.

Because of declining fertility rates, the religious group begins to round up women who are able to have babies and forcing them to become handmaids. Offred, her husband and her child attempt to escape by crossing the border into Canada, but are caught before their able to get out of the country. It’s unclear what happened to Offred’s family, but she’s determined to survive in hopes her daughter is still alive somewhere.

Offred is taken to a place called the Red Center, where they instill fear of rebellion and teach the women how to be obedient concubines.

I know, it sounds awful, right? That’s how this dystopian society was formed in The Handmaid’s Tale and even though it was written in 1985, doesn’t it seem like something that is still completely relevant today?

Let’s just hope Offred and other members resisting the culture can get out of it in the TV show, because the book offers no happy endings.