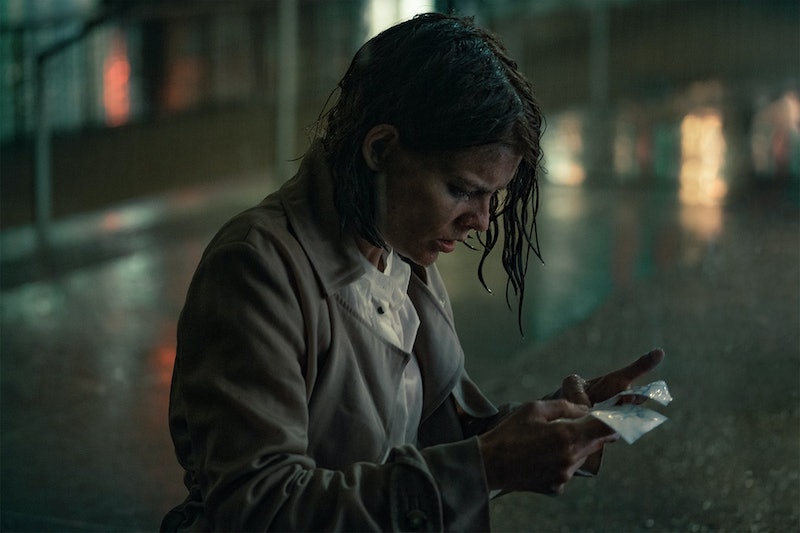 Starz' new miniseries The Rook, based on the Daniel O'Malley novel by the same name, plunges the audience into a big mystery with subtle supernatural twists right off the bat. Unless you've read ahead, nobody knows what happened to Myfawny in The Rook because guess what? She doesn't either. That simple question kicks off this unraveling mystery.

In the pilot episode, Myfawny ("rhymes with Tiffany") Thomas wakes up on the Millennium Bridge in London with no idea who she is or how she got there. She's surrounded by bodies wearing latex gloves and finds a message in her pocket from her pre-amnesia'd self instructing her how to get home. Once there, she finds more files and videos from the past that start to fill in those gaps, but also raise a ton of questions.

It's clear that Myfawny knew someone was going to take her past and identity away from her. She just didn't know the who, when, or why of it all. Figuring that out, while trying to blend into a strange environment and stay alive is now Myfawny's mission. Her boss, Lady Farrier, at a secret chess-based government organization called the Checquy doesn't seem surprised that this has happened to her either, but for now she's the only one who knows the truth.

The official Starz description for The Rook and the premiere episode describes the Checquy as "a paranormal secret service." Myfawny is a Rook. Traditionally, in chess, there are two rooks — but the "other" person in Myfawny's position is actually four people, called the Gestalt, who share one mind. It's implied that, like many of her colleagues, Myfawny has some kind of supernatural ability of her own and that that ability makes her somewhat of a weapon.

So we're dealing with people who have superpowers, essentially... though The Rook doesn't take a flashy comic book approach, and says that Myfawny and the operatives at the Checquy are "special" and have certain "abilities" instead. Perhaps someone who has the supernatural ability to alter memories attacked and did this to her. The specificity of her amnesia is specific and could help her to find a motive.

Did Myfawny find out some kind of secret information that she wasn't supposed to know and get in too deep? She remembers everything except her identity.

We don't know exactly what Myfawny's powers are, but it does seem like they contributed to the attack on those people at the bridge. While she is solving her own mystery, the people she works for are trying to figure out what happened at the bridge. They've even brought in an American member of the team, played by Olivia Munn.

At the end of the episode, per those video messages from the original Myfawny, our hero determines that someone in the Checquy betrayed her. Not only does she have to keep her memory loss a secret, she has to discover a mole. They did this to her, and therefore she can't trust anyone. The book that The Rook is based on has a sequel, too, so if it's grabbed you this early on — know that we're just getting started.