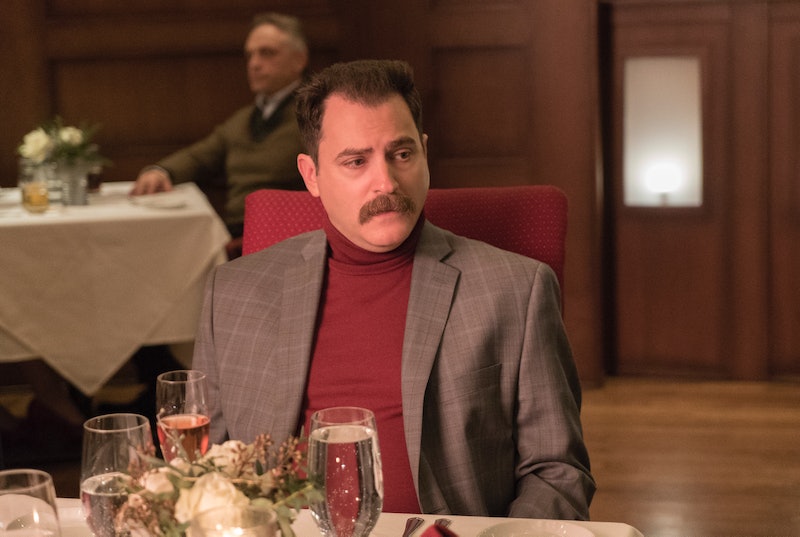 No character has had a harder time in Fargo Season 3 than Sy Feltz. He wasn't always a great man, and he seemed to think success equated to driving a massive yellow Hummer. (Spoilers for Season 3 of Fargo!) But he certainly didn't deserve to go through the psychological torture that V. M. Varga subjected him to for most of the season. After sipping a poisoned cup of tea from Varga puts him into a coma, Sy is bed-ridden for the remainder of the season. The Season 3 epilogue reveals him having dinner with Stussy's family, unspeaking and immobile. What happened to Sy on Fargo in those missing five years?

After losing control of his company and the trust of his best friend at the hands of Varga, Sy crumbles in the arms of his wife and declares, "The world is wrong. It looks like my world, but everything's different." It's a heartbreaking moment, but in reality Feltz's fate was about to get far worse. Sy Feltz ends the season suffering from what appears to be "unresponsive wakefulness syndrome," used to be referred to as a "vegetative state." Whatever poison Varga fed to Sy, it was enough to do some severe neurological damage that caused him to lose his motor functions while in his coma.

This condition, according to Merck Manual, is best described as "when the cerebrum (the part of the brain that controls thought and behavior) no longer functions, but the hypothalamus and brain stem (the parts of the brain that control vital functions, such as sleep cycles, body temperature, breathing, blood pressure, heart rate, and consciousness) continue to function." Basically, Sy's body is alive but his brain does not allow him to express himself or speak.

The world has moved on and Sy, the frantic and loyal partner of Emmit Stussy, seems to no longer be a part of it. Instead, Emmit's closest friend is an unresponsive version of his former self, a constant remind of the damage that Emmit allowed to happen by not standing up to Varga.

Tragically, Sy probably won't be getting better any time soon. As Merck Manual explains, "People with a persistent vegetative state rarely recover any mental function or ability to interact with the environment in a meaningful way."

Sy was feeling trapped under the thumb of Varga, and now it seems that through his own poisoning he'll never be able to be free again. It appears that at best, Sy will one day no longer be in this unresponsive state and instead be in a minimally conscious state, where he will be able to make eye contact and give extremely limited verbal responses to questions.

It seems that despite becoming unresponsive, Sy is still surrounded by his friends and family. Emmit still speaks to him, even if he can't respond, and his wife is still by his side. It may be for the best, however, that Sy is unable to fully comprehend Emmit's murder at his own dinner courtesy of Mr. Wrench. Sy may be one of the few people to make it out of Fargo Season 3 alive, but he's far from the person fans met at the beginning of this story.

More like this
Sophie Turner Had A Live-In Therapist To Help Combat Her Eating Disorder
By Nola Ojomu
What Happened To The Real Sean Suiter From We Own This City?
By Kadin Burnett
Netflix Just Revealed When 'Never Have I Ever' Seasons 3 Will Premiere
By Gretchen Smail and Alyssa Lapid
Kim Cattrall Spilled All The Tea About Not Being In The 'Sex And The City' Reboot
By Radhika Menon
Get Even More From Bustle — Sign Up For The Newsletter