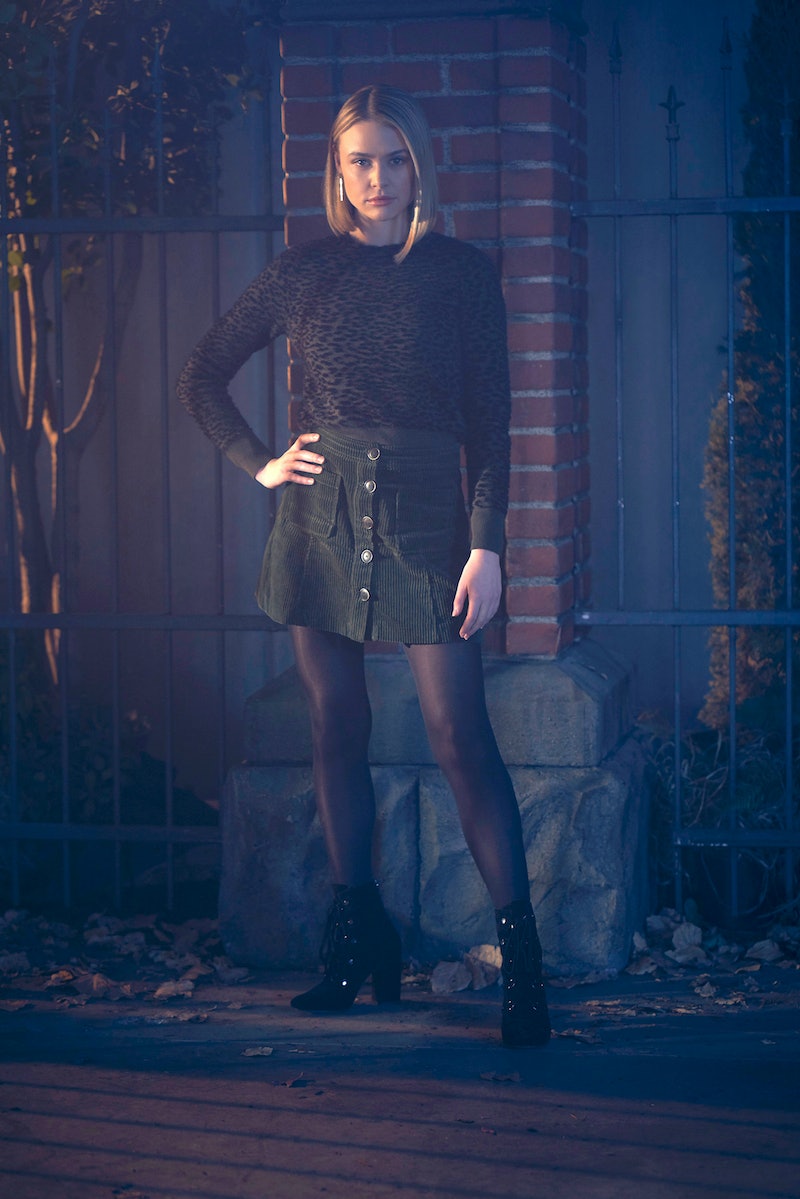 As the mystery unfolds each episode, fans get one step closer to understanding who Taylor really is on The Perfectionists. She was revealed (to audiences) to still be alive in the pilot, and now Ali and Mona know she faked her own death, too. But the majority of Beacon Heights thinks Taylor is dead, and she prefers it that way. While Ali was able to convince her to come back to her house, Taylor was extremely reticent. So it was sort of unsurprising that, when Ali and Mona went to check on her, she was gone. Hayley Erin, who plays Taylor, tells Bustle that fans will see her again in the next episode — but that there may be some trouble ahead for her mysterious character.

"It's so typical Taylor to just keep people guessing," Erin says. "We'll find her next week, um, and she's maybe getting herself into a little bit of trouble. She had it made at Alison's house, and now she's just making trouble again for everyone."

Erin couldn't elaborate on what kind of trouble, but it's interesting that Taylor is the one making the trouble, rather than just being in trouble. That makes the situation a little more complicated, since it may not be as simple as just someone tried to kill Taylor and now she's on the run. She may have some secrets of her own, and Erin says that there's a lot of complexity to her character.

"There's a quote in Shrek where he's like, 'I'm an onion, I've got layers,' and that's how I feel about Taylor," Erin says. "She's like a little onion that we'll get to peel through each episode. I'm excited for everyone to see what's lurking beneath, who she really is and what she's up to."

The last time viewers saw Taylor before Ali tracked her down was when Taylor and Nolan were hacking into Beacon Guard to try to figure out why the security system was tracking certain students. Erin says Nolan's death threw a wrench in that project, but she's confident Taylor will find her way back to it. "I think she's a little distracted, but, at the end of the day, she's very goal-oriented. So, she knows that she's got some work to do," Erin says.

And now that Ali and Mona know about Taylor, perhaps they'll be able to help. That is, if she doesn't keep disappearing on them. Erin says that she's used to comparisons between her character and Ali, but with how smart and technologically savvy Taylor seems to be, she also resembles Mona a little bit. In fact, some fans have even theorized that the mysterious person Mona's playing chess with is Taylor.

"I love that," Erin says when I mention the theory. "I love, love, love Janel [Parrish, who plays Mona] and I think that would be like the coolest interaction, so mysterious and intriguing."

Speaking of fan theories, Erin says she reads every one she comes across. "It's actually my favorite thing to do. I think I've read all of them. ... The fans are so intuitive. They're so out there and somehow still so close," Erin says. "They like really pick up on the right details, it's amazing. A couple of people have gotten super, super close on a couple of things where I was like, 'Wow, I'm just thoroughly impressed. You should actually be detectives.'"

Erin says she tried to be a detective herself while reading the scripts — particularly with Taylor's mother Claire Hotchkiss. "Claire is so interesting, I love that character ... she is kind of mysterious and shady but at the same time she is such a loving mother, and you see that when she's sitting down and talking with Alison and pouring her heart out," Erin says. "I think Taylor has an idea of who her mom is — good and bad — and I loved figuring that out as I would get the scripts. I'd be like, 'What's Claire up to? What is she doing? I just can't figure her out.'"

And while Taylor understands the attention cast on characters like Claire, she cautions fans to keep an eye on other Beacon Heights residents too. "Ray Hogadorn, I'm obsessed with the idea of that character ... he's so interesting, right? It's serious [Pretty Little Liars] vibes," she says of the recently introduced (and, in my opinion, shady) janitor. "And then, I don't know, I always feel like the good guys — like why is no one looking at them? Let's look at the Perfectionists. Maybe let's keep an eye out for those three," she says, referencing Dylan, Caitlin, and Ava.

But Erin acknowledges that the beauty of these kinds of shows is that no matter what details or which people you're focusing on, you're usually missing something else. "Somehow, even if you're looking at the people that you think you shouldn't be looking at, you're still missing the person that is flying under the radar."

One person that's definitely flying under the radar is Taylor, and Erin says more will be unveiled about her soon. So much so, in fact, that she thinks fans will have a definitive opinion about her by the season's end. "Taylor is going to reveal a lot more about herself throughout the season, and I think people will either love her or hate her by the end," Erin says.

With that kind of a tease, it's going to be even more fascinating to keep tuning into the series on Wednesdays at 8 p.m. ET on Freeform. Stay tuned to see if you'll be a Taylor lover or hater.