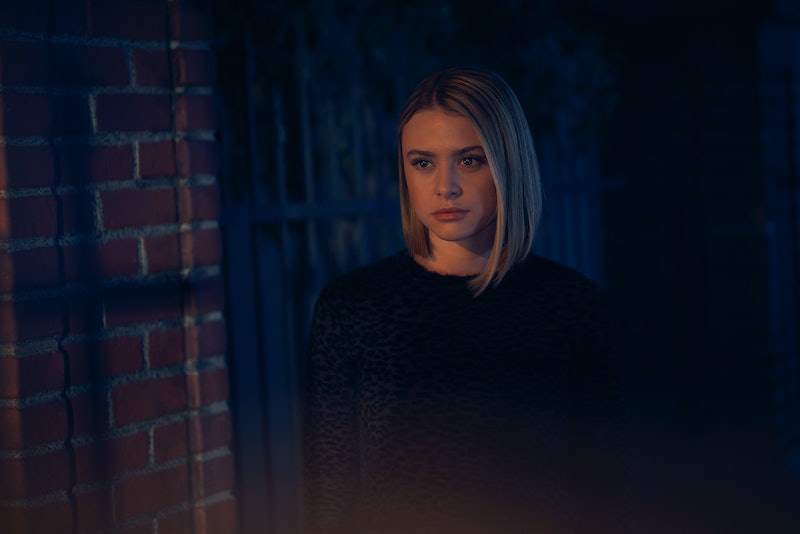 Pretty Little Liars was known for its surprising reveals, but The Perfectionists spinoff took things one step further by revealing in the very first episode that Taylor Hotchkiss is still alive. As far as anyone is concerned, Taylor died by suicide. But Taylor faked her death on The Perfectionists for reasons that are starting to become clear. In the premiere, Taylor received a visit from her brother Nolan and filled him in on the work she'd been doing. She's been hacking into the Hotchkiss Industries security system and noticed that they're using Beacon Guard (the BHU campus security system) to spy on specific students.

Taylor said they couldn't take the company down until they knew why this was happening. Nolan said he thought he knew someone who could help, but Taylor was immediately concerned about letting people in on their secret. After all, she's taken great precaution to make sure people think she's dead. But Nolan assured her all was safe with this person. He later went to meet them on the school roof — supposedly a safe zone from the spying — where he revealed to a shadowy figure that Taylor was still alive. The figure then pushed Nolan off the roof to his death.

Now at least one person knows Taylor is alive, but others may develop suspicions. Ali, in particular, is going to be digging into Taylor. She realized the two look similar and has begun to suspect she's been brought to BHU by Claire Hotchkiss for that reason rather than her teaching skills. She's even been set up in Taylor's old house, where, under the wallpaper, an ominous message reads, "They’re watching."

The end of the premiere confirmed that, with a Beacon Guard HQ set up to watch students at all corners of the school. Taylor knows this too, and it's likely why she faked her death. She probably found out she was being watched by her family's own company and wanted to fall off the map to investigate in private. Clearly someone also has it out for the Hotchkiss children if Nolan was murdered, and Taylor could have faked her own death to avoid facing a similar end like Nolan. She beat them to the punch, so to speak.

But her secrets may not stay that way for long. Whoever Nolan met on the roof knows Taylor is alive, and soon Ali begins to believe the same. The Episode 3 synopsis on the Freeform press site says that "Alison begins to look into the circumstances surrounding the mysterious suicide of Taylor Hotchkiss." Just an episode later, "Alison hunts for Taylor, thinking she may be alive and in hiding." And by Episode 6, Alison's recruited Mona to help with that synopsis reading, "When Alison brings Mona into her investigation of Taylor, Mona makes a surprising discovery."

It seems that, before long, Ali will track Taylor down. The actor who plays Taylor, Hayley Erin, told Bustle that most of her scenes were with Sasha Pieterse who plays Ali. The two characters have more than just looks in common, because both of them also came back from "the dead." Erin told Teen Vogue that her character was basically described to her as the "new" Ali, so expect plenty more secrets where that "I'm not dead" reveal came from. "Even when you think you know Taylor’s secrets, there are secrets beneath those secrets," Erin told TV Line. "That’s what makes her really dangerous. You don’t know if you can trust her."

That's right, Taylor may seem like she's on the good side — she's trying to bust BHU for spying on people — but there may be more than meets the eye here. After all, this thing has gotten so big that she faked her own death and Nolan lost his life. Erin told Teen Vogue that things expand even more from here. "It's a big thing," Erin said. "It's bigger than her and it's bigger ... than everyone that's working towards solving this mystery."

As Taylor hunts for answers, she may be willing to break a few rules along the way. "She's got her moral code that she follows," Erin told the magazine. "She's so freaking smart ... she's not so concerned about what everyone is always thinking about her now that she's shed the pressure of being a perfectionist. She's got a lot going on."

Taylor was able to escape her perfectionist life and the constant monitoring of the Beacon Guard system by faking her death. Now she can work to take Hotchkiss down in secret where they won't be able to see her coming. But more people may start to learn that she's alive after all, so Taylor needs to work quickly if all her work is to be for something.