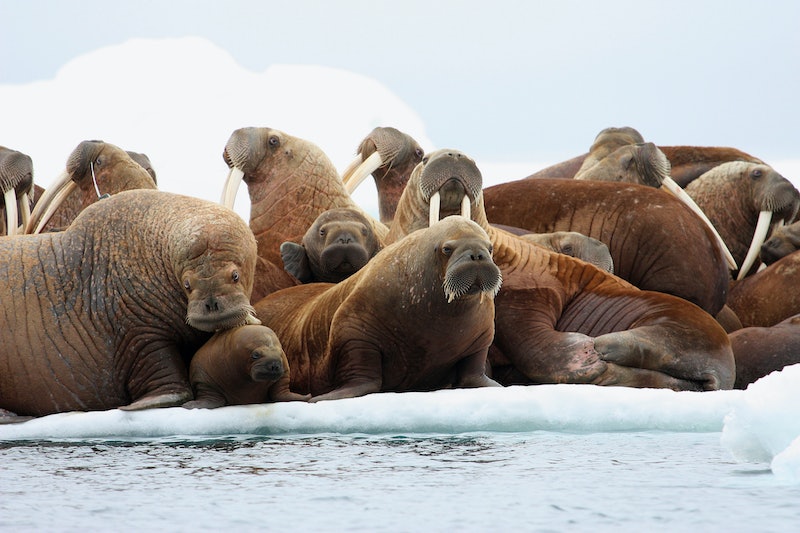 Hearing about the effects of climate change is all well and good, but seeing it with your very own eyes is often the trigger for taking action. That's the premise of Netflix's new David Attenborough-narrated series, Our Planet. One scene in particular has resulted in a mass outpouring of tears. So if you're wondering what happened to the Our Planet walruses, you're not alone.

The second episode of the eight-part series focuses on Earth's frozen landscapes. But it wasn't fluffy polar bear cubs or adorable seals that stole everyone's heart. No, it was two-tonne walruses. Due to diminishing sea ice, these tusked creatures have been forced to take to land for a well-earned rest.

As viewers are shown, thousands upon thousands of walruses are descending on beaches at the same time, resulting in immense overcrowding. (WWF reports that these "haul-outs" also occur for purposes of socialising and reproducing.) Some of the smaller ones have taken to hauling their way up cliffs to find space. But poor eyesight, an unusual setting, and an innate need to return to the sea is leading to the deaths of hundreds of these animals.

"They struggle up the 80-metre cliffs — an extraordinary challenge for a one-tonne animal used to sea ice," Attenborough narrates during the episode. "As they get hungry, they need to return to the sea. In their desperation to do so, hundreds fall from heights they should never have scaled.”

I won't go into too much detail at the scenes that follow, but let's just say that watching a living creature unwittingly fall to its death makes for truly horrifying TV. Sophie Lanfear made the walrus episode and told The Times it was "the most horrendous thing [she had] ever witnessed."

She explained that walruses' thought processes are skewed, telling the paper: "They have evolved to live on sea ice which is about one or two metres above the sea. So if they fall off ice into the water it’s fine. That is their concept of an edge and falling off. On the cliff, they teeter back and forth, back and forth, then just kind of walk off.”

Overall, the film crew witnessed hundreds of dead walruses on beaches bordering the Russian Arctic. Along with dying from cliff falls, some are also crushed to death, reports The Atlantic. Some have even managed to swim into the sea despite internal injuries and have subsequently died and washed back to shore. As WWF reports, only 129,000 Pacific walruses are left in the wild.

Some marine mammal experts have cast doubt on climate change being the reason for such footage. "Walruses have shown similar behaviour on the U.S. coastline when space and ice were not an issue, and the reason is unknown," Lori Polasek from the University of Alaska Fairbanks told The Atlantic. However, the number of cliff-related deaths captured by Our Planet is believed to be much bigger.

But Nicole Misarti, a professor at the same university, said they do recognise that the changing nature of the planet has some part to play in walrus behaviour: "We do believe that haul-outs have increased in size due to the loss of sea ice — in part, due to females and their calves moving to land during summer."

I have reached out to Netflix to see if the fate of the remaining walruses is known. Whatever happened, the scenes that were captured on film prove that action needs to be taken. And fast.