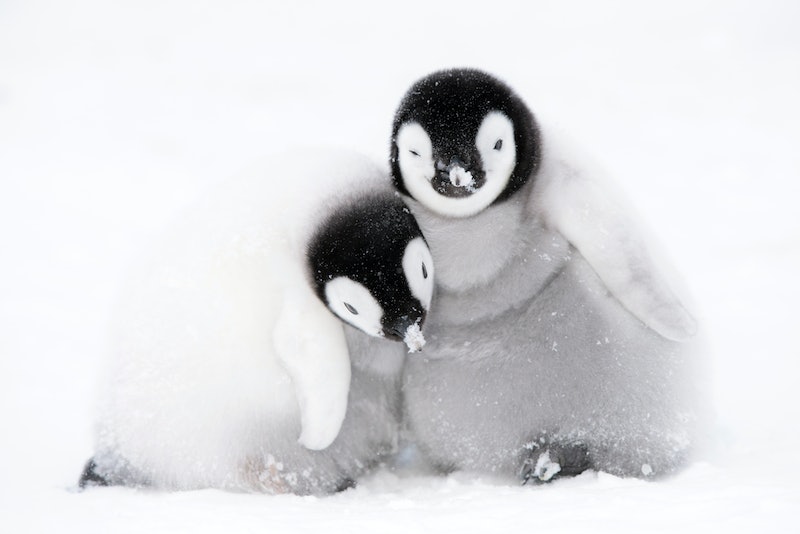 Sunday night was a total roller coaster of emotion for many in the UK, or at least for everybody tuning in to watch BBC’s Dynasties. The nature documentary series hit a pretty strong chord in its most recent episode. It focused on the plight of several baby penguins as they battled for survival in subzero temperatures, and completely ruined my frail nerves while they were at it. Although one of the golden rules of filming the animal kingdom is that the crew should never interfere with the circle of life, the team behind Dynasties saved some baby penguins after they became trapped in a ravine.

The show, which focuses on a different member of the animal kingdom in every episode, was all about emperor penguins on Sunday. During one incredibly tense moment, a group of penguins — including mothers and babies — accidentally fell into an icy ravine and couldn’t get out. No matter how they tried, they just couldn’t scale the slope and all over the UK people began unanimously screaming at their tellies.

In a twist straight out of a horror movie, one mother was even forced to abandon her fallen baby to save herself, another edged her way up the slope with her baby on her feet using her beak to dig into the ice.

Watching the penguins’ struggle on camera was completely nerve-wracking, but it was obviously far worse for the Dynasties crew who were literally just a few metres away. It’s no surprise that the group, which included director Will Lawson, camera operator Lindsay McCrae, and assistant Stefan Christmann, were put in a difficult position and had to choose between their head and heart. Thankfully for the penguins and Dynasties’ fans, their hearts won out and they stepped in.

The crew told The Sun that they eventually built a miniature staircase out of snow to help out the gang but the real tension came with whether or not the penguins would take the hint. Finally, thankfully, the animals realised they could escape and made their way to safety. Aka the greatest comeback story of all time.

Lawson explained to The Sun what it was like actually being there confronting a literal choice between life and death. The decision to build a ramp, rather than jump in and carry the penguins out the way I probably would have if I was there, was a deliberate one as they thought it was better to “intervene passively”.

Lawson explained, “Once we’d dug that little ramp, which took very little time, we left it to the birds. We were elated when they decided to use it.”

Elated is an understatement, TBH. Who knew a pack of penguins could make so many people cry?

“There’s no rule book in those situations,” Lawson said, “You can only respond to the facts that are right there in front of you. As you can imagine, we only show a fraction of the real trauma and difficulty that the animals go through — it was a very hard thing to see.”

Although the internet and many people at home rallied around Lawson and his crew, it was still understandably a controversial choice to intervene at all. Lawson stood by his team however and explained, “What was unique with this was that the only other animal there was us — nothing else would directly benefit from this. I’m sure some people will have an opinion in the other direction but in my heart of hearts I think we made the right decision."

BBC Earth actually shared a heartwarming photo of that genuinely brought a little tear to my eye. I don't know if this was taken before or after the harrowing scene was filmed, but in my mind this is a baby penguin coming to say thank you and nothing is going to convince me otherwise.

The decision was so controversial that it’s actually wound up dividing a couple of the biggest wigs on Dynasties: the show’s producer Mike Gunton and David Attenborough himself.

According to The Sun, Gunton was very much on the team’s side and said at a press conference, “We have a rule that interfering is a very dangerous thing to do. But these penguins were going to die through a freak act of nature if nothing happened. How would this conversation be going if you said you saw them there and did nothing? I think you would have to do it.”

On the other hand however, Attenborough took a more brutal view of things. Although he didn’t mention the penguin incident specifically, he said, “Tragedy is a part of life, you know. You can’t have sunshine throughout your life. To have done anything else would only make matters worse and distort the truth.”

I love you David Attenborough, but I’m gonna have to stop you right there. Right or wrong, humans have spent so long ruining the environment that I’m happy to let this little glorious act slide.

The next episode of Dynasties will air this Sunday (Nov. 20) at 8pm on BBC One and will focus on a pack of lions. Previous episodes can be watched now on BBC iPlayer.