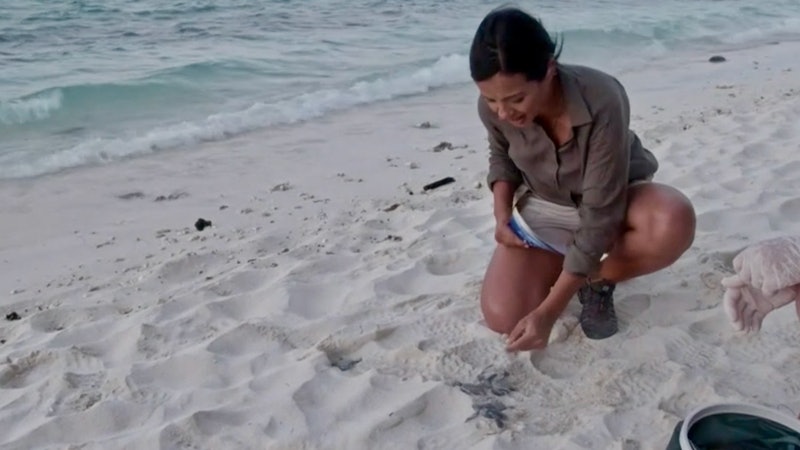 Watching cute baby animals take their first steps out into the world is a beautiful thing, but nature can be unforgiving, even at the most unexpected of times. This became evident during last night's (March 31) episode of Blue Planet Live, when the whole nation watched with bated breath as tiny newborn turtles made their way into the ocean. But what happened to the baby turtles on Blue Planet Live?

Well, sadly, one of the turtle's futures got cut short by a silver gull scouting the area for a snack. Presenter Liz Bonnin and wildlife worker Janine Ferguson were overseeing the release of six hatchlings on the coast of Heron Island in Australia when one baby turtle was picked up and carried away by a gull. Ironically, the incident happened just as Bonnin stating that, even though the hatchlings are "left to their own devices to the predators," they will hopefully spend "at least 100 years in our oceans if all goes well."

Once it became clear that the gull found its prey, the show quickly cut to a different camera angle, but viewers were still able to see the seagull scurry off with one of the hatchlings in its beak.

Many took to Twitter to call out Bonnin and the crew for what happened. Some criticised the team for not releasing the turtles closer to the ocean, while others questioned why they released them during the day as opposed to at night, when the turtles actually hatch.

In response, a BBC spokesman stated:

"We’ve been working with scientists from the Heron Island Research Station to explore [the lives of green sea turtles], from hatching to returning to the beaches to nest ... As part of their ongoing studies, researchers on Heron Island check nests for any hatchlings left behind, 48 hours after the others naturally emerge. Those turtles still alive are carried out at either dawn or dusk for release, as we saw last night on #BluePlanetLive. They can’t be released directly into the ocean as the turtles need to 'imprint' the beach by walking across the sand to the water. In this case, as with the turtles that emerge naturally, some opportunistic predation occurs by other species either looking to feed themselves or their own young. If this happens we are unable to intervene and have to let nature take its course."

Bonnin echoed these sentiments on social media after the episode aired. "These hatchlings are part of the food web here and the silver gulls need to feed their newborn chicks too," Bonnin tweeted. "Hard to watch but we can't do anything about it."

Bonnin also stated that the crew "took hatchlings that would normally die in the nests, the ones that are left behind after the clutch have emerged days before, to give them a lifeline" while also adding they had permission from the scientists on the island to do so.

As sad as it was to watch, the circle of life is an inevitable process even for adorable baby turtles *sniff*.

There has been no word yet from the Heron Island Research Station or the Blue Planet Live team about what has happened to the baby turtles that made it to the ocean during last night's show. However, as the whole series was filmed live, it'll probably be a little while before we hear anything. So all we can do for now is wait.