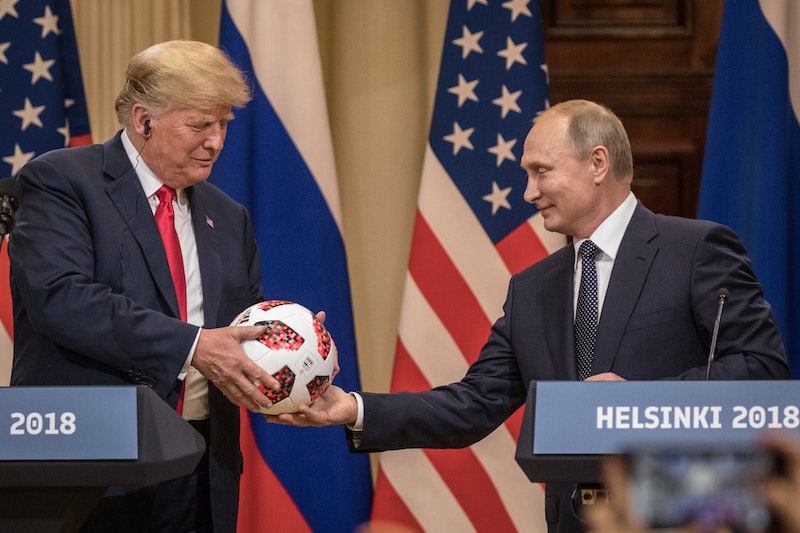 The soccer ball Russia's leader gifted President Trump came with the message that the proverbial "ball" is now in the United States' court — but it's unclear what happened to the physical soccer ball he handed Trump. Although President Trump said on Monday that he would give it to his youngest son, the administration has not commented on the whereabouts of the soccer ball Vladimir Putin gave Trump since the U.S. delegation returned to Washington.

Trump met one-on-one with the Russian president in Helsinki before holding a joint press conference, which is where the soccer ball made its appearance. "That will go to my son Barron. In fact, Melania, here you go," Trump said as he tossed the ball to the first lady, who was sitting in the front row of the audience.

Rep. Lindsey Graham (R-SC) warned Trump via Twitter to check the soccer ball for listening devices, sparking a round of jokes about how the gift shouldn't be allowed inside the White House. The administration hasn't quelled those suspicions, though.

Although it's common for heads of state to exchange gifts, they don't all belong to the president. "When a President accepts a gift from a foreign Head of State, it becomes the property of the American people, as he is working on our behalf," the George W. Bush Presidential Library and Museum website explains. If the president chooses to keep a gift, he must buy it at the "appraised value" when he leaves office.

This doesn't apply to gifts that are deemed to be worth less than $390, though. The Foreign Gifts and Decorations Act allows federal employees to accept these less valuable presents. Lloyd N. Hand, who was chief of protocol for former President Lyndon B. Johnson, tells Bustle that when it comes to Putin's soccer ball, Trump likely "wouldn’t have to give it to the State Department."

"I have no idea the value of the soccer ball," Hand says. "Unless that soccer ball is laced in gold, it’s not going to be of that value."

Assuming the soccer ball wasn't worth hundreds of dollars, it wouldn't be illegal for Trump to keep the soccer ball or pass it on to his youngest son. If it was valued at more than $390, though, the Trumps would be required to buy it from the government.

"The Secret Service would probably examine it to make sure it wouldn’t be breaking any protocol," Hand adds. "And my guess is he could keep if he wanted to. He could give it to his son, as I heard him say he wanted to do."

While it may be legal for Trump to give the soccer ball to Barron, doing so may fuel concerns that the president is too close to Putin for comfort. Despite the president walking back his comment that doesn't believe U.S. intelligence agencies' conclusion that Russia interfered in the 2016 election, he was criticized by Democrats and Republicans alike for siding with Putin. Giving a gift from Putin to his son could be interpreted as a sign of his trust for the Russian leader.

On the other hand, if Trump didn't keep the soccer ball in the family, it would likely leave the White House. Foreign gifts the president doesn't keep are generally sent to the National Archives and Records Administration (NARA). Once the president leaves office, those gifts are transferred to a presidential library. That means if Trump doesn't keep the ball at the White House, it will likely end up in NARA storage:

Until the soccer ball makes another appearance, its whereabouts are anyone's guess. Trump has the right to give the foreign gift to his youngest son if he chooses, provided it was valued below the threshold. Otherwise, if it hasn't ended up trashed by the Secret Service, it will probably sit in storage for the next few years.