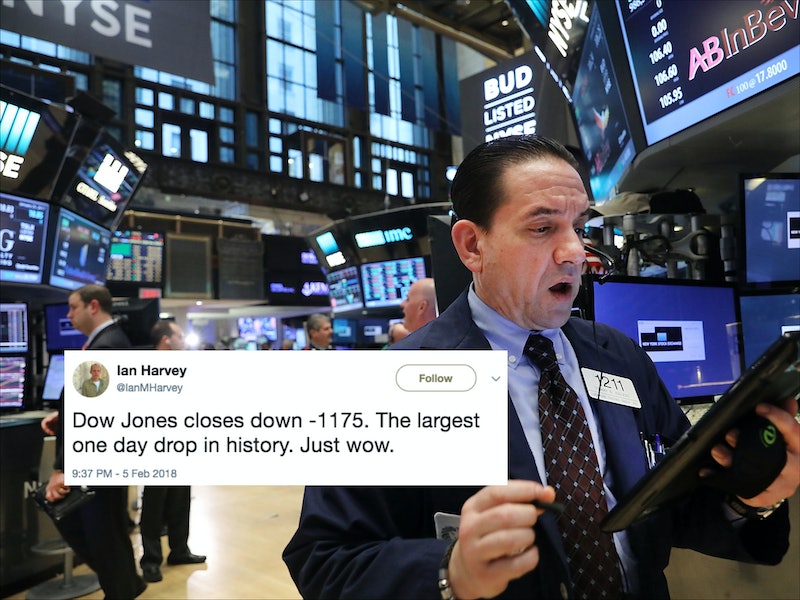 On Monday afternoon, the Dow Jones fell by over 1,100 points, becoming the single worst day for the American stock market since 2008. And on social media, Dow Jones' rapid crash seriously freaked out Twitter users.

Although Donald Trump has been lauding himself for bringing the stock market "up, up, and up," it's worth remembering that the present stock market is facing a massive drop in its points. And it's been taking place for the past six trading days, according to CNN Money.

It's critical to remember that this plunge is the biggest intraday point drop for Dow Jones. The last time such a steep drop took place was in September 2008, during the financial meltdown. Chief economist for the PNC Financial Services Group, Gus Faucher, told NPR that this was sudden plunge is part of a shifting market. "I think we are in a changing environment where it looks like we're going to have a bit higher inflation and so that has markets on edge. And I think volatility is likely to be higher in 2018 than it was in 2017," Faucher said.

In spite of the stock market getting slammed on Monday afternoon, it's good to remember one thing: markets are notoriously volatile. These drops happen. Markets oscillate back and forth between profits and losses, highs and lows, successes and massive failures. That's how they operate. Market analysts advise that people interest in stocks should wait before making an final move on investment. They also suggest that you keep an eye on the stock market. See how it reacts.

Most importantly, one market analyst, Thorne Perkin, who is the head of the Papamarkou Wellner Asset Management firm, told USA Today that people will benefit if they understand and keep an eye on the national economy. "Strong earnings, government stimulus, and a broadly improving global economy will bolster the equity case and keep prices moving higher," Perkin suggested.

If you're into Bitcoin - which is a type of digital currency - you might know that it isn't exactly doing so well, according to analysts. On Twitter, Dow Jones' present status was likened to Bitcoin's plunge in value.

That's one way to put it.

If words don't deliver the gravity of the situation, maybe an image of the crash will do.

Some observers commented on the timing of the crash.

ThinkProgress reporter Judd Legum tweeted, "Dow Jones now down over 1,100 points over the last two days. This isn't Trump's fault - it's actually a reaction to how the Fed will react to rising wages - but it also shows how dumb it is for Trump to constantly talk about the stock market."

CNN correspondent Jim Sciutto said, "By my math, in the last two trading days, the Dow Jones has now lost 26% of the gains since Trump took office."

Some observers wanted to hear a statement from the current government.

One Twitter user compared the crash to the shocking 2008 financial crash.

"Please stop the doom and gloom," one Twitter user said.

Several Twitter users kept noting the timing of the crash coinciding with the present administration.

Most people simply couldn't look away from the huge drop in points.

Observers kept mentioning that it was the largest single day drop.

Market analysts are keeping an eye on the stock market and advise against any rash decisions regarding investment. If you're interested in understanding how a stock market works, what may cause a crash, what is market-based volatility, you should keep an eye on updates.