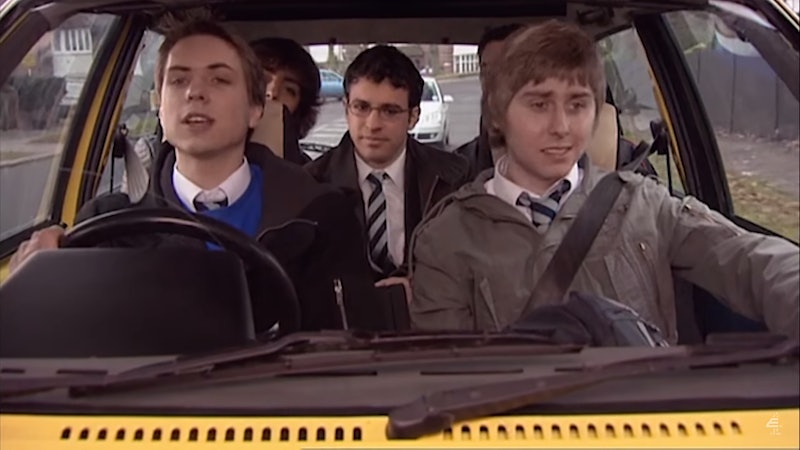 Some scenes may have left you hiding behind a cushion out of pure embarrassment for Will, Simon, Jay, and Neil, but there was something endearing about how much of a mess The Inbetweeners could get themselves into. It’s also completely impossible to get to the end of an episode without laughing. While the boys have become representative of how truly awful being a teenager can be, there was one prop used in the series which is about as recognisable as the characters themselves. Yes, if a recent tweet is anything to go by Simon's yellow car could be back for The Inbetweeners reunion.

Blake Harrison, who played lovable imbecile Neil tweeted out a picture of the iconic yellow car with its fetching red door and I am really hoping this means we will see the "Pussy Patrol" back in action. Although I think it is a safe assumption that someone will have had to clean the seats since they last used it. Harrison sent fans into overdrive as he tweeted out the picture with the caption “Hello old friend” on Dec. 8.

It comes after comes after Harrison, his fellow castmembers James Buckley, Joe Thomas, and Simon Bird, plus Channel 4 confirmed that they will be reuniting for a 10-year anniversary special, The Inbetweeners: Fwends Reunited. That’s right, aside from the two Inbetweeners movies which saw the clueless foursome take on Crete and Australia, the boys haven’t appeared on our TV screens since the Camping Trip season finale in Oct 2010 which saw Simon's little yellow car meet its fateful end in a lake. Or so we thought. Because if Harrison's tweet is anything to go by, it may be making a comeback in a big way.

So, what exactly can fans expect from The Inbetweeners: Fwends Reunited? With the return of our four favourite former sixth-formers, and hopefully Simon's yellow car the 10-year special will be a two hour show featuring behind the scenes footage, the story behind the show, surprise guests, celebrity fans, unseen footage and plenty of embarrassing stories. Simon Bird, James Buckley, Blake Harrison, and Joe Thomas will also be hosting The Inbetweeners Awards which will celebrate every cringeworthy, side-splittingly funny moment from the show. This is going to be one party you do not want to miss and the boys won’t have to sneak into it over the garden fence for once. Just make sure Will gets the memo that vests weren’t acceptable in 2008 and they still aren’t now.

Speaking in a press release Channel 4’s Head of Live Events and Commissioning Editor for Entertainment, Tom Beck said, “Will, Jay, Simon, and Neil spent years failing to sneak into the best parties, so I’m very pleased to throw one that they’re definitely invited to. I just hope Will brings his Mum.”

I contacted a representative for The Inbetweeners to establish when you can expect to see the best "fwends" reunited. They told me that the special will be launching on Jan 1 2019 at 9 p.m on Channel 4. So, if you are anything like me you will be able to start your new year cuddled up on the sofa reminiscing on some of the most hilarious TV moments from times gone by. And the only way to ride into 2019 is in Simon's yellow car, right?

Co-executive producer, Will Macdonald said in a press release, "the love for The Inbetweeners is huge, the kind of love that Jay would boast he's had many times; big celebrities, millions of viewers and loving fans from across the globe. And it's so exciting the boys will be back together to feel that love from all those people and enjoy it first-hand. What could possibly go wrong?"

With Bird, Buckley, Harrison, and Thomas behind the steering wheel of Simon's yellow car once more it is hard to think of what else could go wrong, surely they have exhausted all of the options at this point. I can’t wait to see the boys joined by cast mates and celebrity fans to look back on what was an amazing series 10 years on.