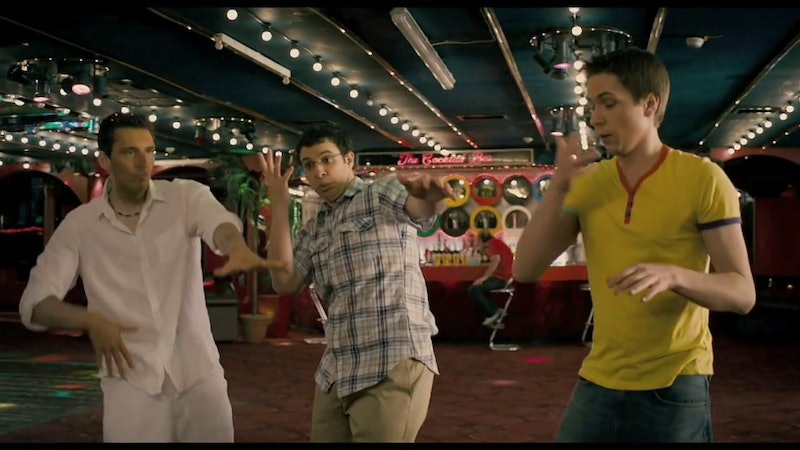 I'm going to start with, how old does that headline make you feel? Guys, ten years. The announcement has confirmed that yes, it has been ten years, but that means there is an excuse for another episode. Now all I want to know is when is The Inbetweeners 10 year anniversary episode going to be on telly? I mean seriously we could all do with a laugh am I right?

So, the production company that made the show, Monkey Kingdom, is grouping everyone back together for another shot at the LOLs. The oh-so-realistic depiction of sixth formers Will, Simon, Jay, and Neil, played by actors Simon Bird, Joe Thomas, James Buckley, and Blake Harrison was such a hit that it spanned 3 seasons and had not one but two hit movies. Nothing to sniff at now is it?

Although Channel 4 is yet to announce an air date for the ten year anniversary Inbetweeners special, we do know a few bits about the show, which will be a two hour long special. Now, everything may not be as you might expect. No, they are not getting together for a one-off episode of the very special show, no the Pussay patrol are getting together for a sort of show about the show.

The show will see all of the actors talking about their time on the show, and all the behind the scene fun and goss, as well as where the concepts for the scripts came from. As well as this there will be celebrity fans chatting about the show, and some funny extras like the cast ranking the funniest parts of the show, including some LOL categories like "best ever moment", and of course, "best ever sex scene."

The show depicts adolescent behaviour, from a male perspective, in an hilarious and accurate way that everyone can relate to, no matter what your gender. We literally all met guys like that.

Speaking to Digital Spy about the huge announcement, Channel 4's commissioning editor for entertainment put an impossibly charming spin on the news. He said:

"Will, Jay, Simon, and Neil spent years failing to sneak into the best parties, so I'm very pleased to throw one that they're definitely invited to."

The creative director of the show's creator, Monkey Kingdom, Will MacDonald said:

"The love for The Inbetweeners is huge, the kind of love that Jay would boast he’s had many times — big celebrities, millions of viewers and loving fans across the globe. And it’s so exciting the boys will be back together to feel that love from all those people and enjoy it first-hand. What could possibly go wrong?"

As all of the cast are set to appear on the show, this means one of the current I'm A Celebrity Get Me Out Of Here contestants, Emily Atack will feature on the show. Atack, who played the most popular girl in school on the hit show, is appearing on the ITV talent show which airs this Sunday, November 18th on ITV at 9 p.m. No confirmation on what level of jet lag she will be dealing with when she appears on the show.

More like this
The Office Lego Set Includes All Your Favourite Dunder Mifflin Characters
By Sam Ramsden
At 28, Lesley Manville Was Acting, Picketing, & Singing Kate Bush Songs
By Olivia-Anne Cleary
Prince Charles Revealed What He *Really* Thinks Of 'The Crown'
By Sam Ramsden
Sean Bean’s Wife Starred In Your Favourite Childhood Show
By Sophie McEvoy
Get The Very Best Of Bustle/UK