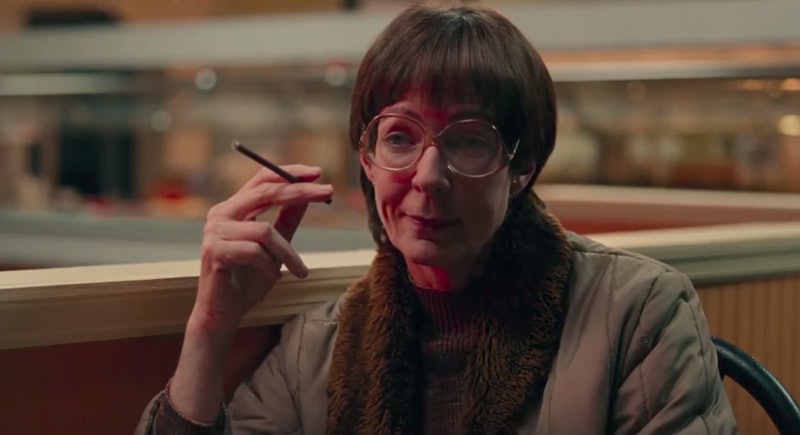 With the movie I Tonya coming out on Dec. 8, people who remember the early '90s are likely to remember the infamous ice skater, Tonya Harding. They might not know her mother, though, but that woman's relationship with her Olympic athlete daughter takes the spotlight in the upcoming biopic. That, and the scandal of the 1994 Winter Olympics when Harding was implicated in the assault of her rival, Nancy Kerrigan. But what happened to Tonya Harding's mom after the controversial events? Harding's mom, named LaVona Fay, aka "Sandy" Golden, stayed out of the public eye for two decades, but she recently spoke with Inside Edition about her relationship with her daughter now.

The interview, published in November, reveals that Golden hasn't spoken to or seen Harding since 2002. When she watched the trailer for I Tonya, she seemed unimpressed by Allison Janney's portrayal of herself. "Is that me?" Golden asked, while watching the trailer, according to Inside Edition. "She doesn't even look like me."

The movie doesn't portray Golden in the most flattering of lights, depicting her alleged abusive behavior towards her daughter. Harding, played by Margot Robbie in the upcoming film, has publicly spoken about her difficult relationship with her mother in the past. The famed figure skater published a book in 2008 which described her mother as abusive, and she's referred to the alleged behavior in interviews over the years. "I was told my whole life, you're fat, you're ugly, you're never going to amount to be anything," Harding told CBS News in 2008.

At the time of Harding's book-publicity tour, Golden denied allegations that she'd abused her daughter, and she still does today. While speaking to Inside Edition, she said, "I gave her one swat at a competition because she was [fidgets her body around] this type of thing. And I was trying to do her hair and they were calling for her on the ice."

In the Inside Edition interview, she also claimed, "I thought I did everything I could for her... I really thought she'd love me for it. She didn’t.” In an interview with The Hollywood Reporter, Janney said that the character she plays in I, Tonya had some redeeming qualities. "There actually was something positive and good that motivated her, even though her methods of mothering... she's not going to win 'Mother of the Year' at all," the actor explained.

Harding rose to fame in the early '90s but quickly fell out of favor when she and her husband, Jeff Gillooly, were suspected of having Kerrigan's knees clubbed by a hired attacker. After Harding was convicted of hindering the incident's investigation, the U.S. Figure Skating Association banned her for life and she received three years of probation, among other punishments. At the time of the controversy, the media's attention turned to Golden, and people who'd known her claimed she was incredibly hard on her daughter.

John McBride, the owner of an ice skating rink in Portland Oregon at which Harding practiced, told The Chicago Tribune, "Her mother had the vocabulary of a truck driver... every little thing that was wrong she'd be swearing and yelling at Tonya."

The upcoming film will likely change a lot of people's opinions of Harding, but Golden proves to be a more difficult character to pin-down. When speaking to Inside Edition, Golden said she doesn't have hope for her future relationship with her daughter. "I’d love to be a part of the family, but I know she does not want this, so I don’t bother her," she said.

If Golden did all of the things that Harding and her friends have claimed, a reconciliation seems unlikely. But hopefully I, Tonya will elucidate everything that went down during the 1994 Winter Olympics so everyone can form their own opinions about the situation for themselves.