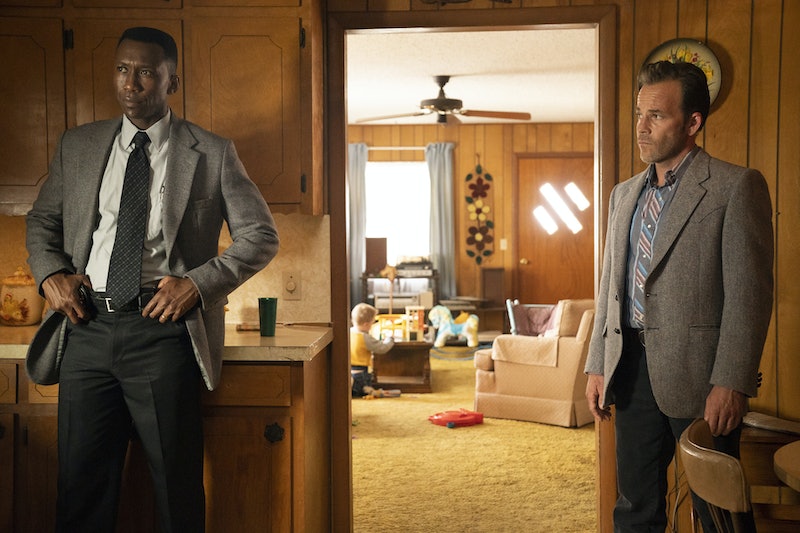 Spoilers ahead for True Detective Season 3, Episode 5. It's difficult to keep all three True Detective storylines straight, which occur in 1980, 1990, and 2015, respectively. At some point, however, it seems like Detective Hays (Mahershala Ali) did something to anger Roland (Stephen Dorff), resulting in a huge fall-out. It's a shocking revelation, since the two partners were so close while investigating the Purcell case. And although audiences don't learn in this episode what happened between Roland and Wayne on True Detective, it was likely something sizable to cause 25 years of radio silence.

When Henry Hays (Ray Fisher) takes his father to visit Detective West, who lives in a remote cabin, Purple doesn't understand what's got him so worked up. See, Hays simply can't remember what he did, and Roland's too stubborn to lay it all out for him. But here's what audiences can gather: In the 1990 timeline, Roland is engaged to a woman named Lori. But when Hays asks when they're getting married, his fiancée answers, "Well, that is touchy."

In 2015, we learn that they never made it down the aisle — in fact, Roland never married, never had kids, and now drinks all day out in the woods with his dogs. "How are you going to talk to these people?" Roland tells Purple, referring to the TV journalist. "We done what we done. You don't know what you might say — or might remember." It's certainly an implicating statement, although it's unclear what exactly he means. Could the two of them have had something to do with the case, then covered up the evidence?

One idea is that Roland was behind Will's death and/or Julie's disappearance. Ten years after the shootout at Vietnam vet Brett Woodard's house, where Hays shoots and kills the man, the detective makes a discovery. Will's backpack was found at the house, but it was pristine. Wouldn't it be more dirty after the explosion? Hays tells Roland that he thinks the backpack was planted in order to frame Woodard, since it was the main piece of evidence they used to charge him with Will Purcell's death. "Somebody was moving fast," Hays says, wide-eyed. "When that shootout happened, somebody saw an opportunity." In other words, someone who was present at that shootout may have planted the evidence. However, Roland seems reluctant to do anything. Could he have placed the backpack while Hays was inside?

Whether or not it was really Roland, perhaps someone was on the inside making sure the truth was never uncovered. "A lot of people around this thing are dead," the journalist tells Hays in 2015. "A lot of people gone." What's more, there was a police officer named Harris James, who went missing in 1990 while they were investigating the Purcell case a second time. All of this seems pretty fishy.

There's also the mystery of what happened with Mr. Purcell (Scoot McNairy). Viewers see him go on television in 1990, tearfully asking his daughter to come home, if she's out there. A woman who appears to be Julie Purcell calls the hotline, and she seems upset. "I saw him on the television," she says. "Leave me alone! Make him leave me alone!" When asked if she's Julie Purcell, she says, "That's not my real name.... I know what he did. The man on TV acting like my father." Then she asks where Will is, saying, "We left him resting."

This seems to seriously implicate the father, Tom. Perhaps the two detectives wrongly convicted a second man of killing Will, which is why Roland is so reluctant to go digging up in the past. After all, he and Tom were close in 1990 — the policeman got Mr. Purcell enrolled in a program, and the two men even prayed together. But when Hays brings up the man's name in 2015, his partner seems agitated.

However, Julie's phone call might also be referring to her real parentage, which was called into question as early as Episode 1. Viewers already know that Lucy Purcell ran around on her husband, so it's fair that Julie would call Tom the man pretending to be her father. But if that's the case, then who is her real dad? Furthermore: was this woman really Julie at all, or simply someone claiming to be?

Audiences also learn from a boy who knew Julie (or a woman named Mary July who looked like Julie) that she may have had a mental illness — or perhaps mental distress caused by her traumatic childhood. The boy says Mary couldn't remember what year it was and called herself a secret princess. "Some of her stories seemed like she used [drugs]," he says. "She's a princess from the pink rooms."

All of these perceived loose ends have clearly haunted Hays (and likely Roland) for the past several decades. And although elderly Hays wants them to solve this case, once and for all, Roland wants him to shut up about the case already. "This what you come to see me about?" he asks, angrily. "25 years, what? You doing old man fantasy camp? You think you can just roll up here and I'll be all, 'Golly gee, partner! Let's grab our junior detective clue finders and have an adventure!'" They soon begin to cry, and it's obvious they both have major regrets in their lives.

So while it's still unclear what exactly transpired between the two men or how exactly it pertains to the case (if at all), everything will be revealed soon enough.