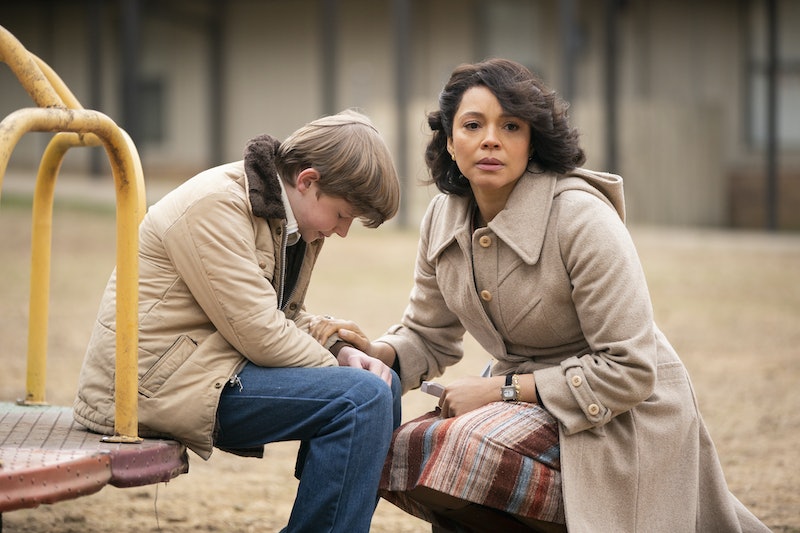 Spoilers ahead for True Detective Season 3, Episode 4. There seem to be some pretty big gaps in Detective Hays (Mahershala Ali) memory, and four episodes into True Detective Season 3, it's still anyone's guess as to who killed Will Purcell. However, here's what viewers know: The boy's body was found in a cave — his bike nearby. There were several other items found in the woods, including some dice, a duffel bag full of toys, and those corn husk dolls. There were also three sets of fingerprints found on the toys — one unidentified. So who was playing with the Purcell kids, and is it the same person who killed Will and kidnapped Julie?

In Episode 3, Hays says into his recorder in 2015, "She [likely Amelia] wrote a bit about how the games we found got people worried that kids were getting killed playing this stuff." The dice that Hays found and subsequently put in his pocket look similar to the ones used in Dungeons & Dragons, which rose to prominence in the '80s (remember Stranger Things Season 1?). Along with the rise of D&D came Satanic panic — or fear of the occult, which many believed was intrinsic to the role-playing game, per the New York Times. Could this be what Hays is referring to?

What's more, it's clear that the detective left something out in the woods, whether purposefully or not. In Episode 3, Hays sees a vision of his wife, Amelia (Carmen Ejogo), who says, "You're worried what they'll find. What you left in the woods. Finish it." Back in the 1980s, audiences see the detective encounter some blood on the rocks near the cave, as well as a piece of hair. So what did he miss — or leave in the woods, and what does Amelia know about it? Whatever really happened that day with the Purcell kids, here are the most compelling culprits so far.

As Hays's partner, Roland (Stephen Dorff), says after they visit the local parish, "I don't like him." Although his alibi is apparently solid, there's something fishy going on at the church. First of all, the priest says that he took the photo of Will Purcell in that prayerful communion pose, which is the same way his dead body was arranged. He also recognizes the dolls that were found in the woods — a parishioner named Patty Favor makes them for their fall fair, he says. The priest also mentions that Julie was looking forward to seeing an aunt of hers, but as the detectives point out, the Purcell kids don't have any aunts.

The Man with One Eye

Mr. Whitehead meets several witnesses' descriptions of a black man with a scar on his face, including that of Patty's. That said, the man was also supposed to be wearing a suit and driving a nice brown sedan, and the fact that Mr. Whitehead lives in a trailer park should give audiences pause. Not to mention the fact that when the detectives go to question him in Episode 4, he doesn't seem to know what they're talking about. So either Mr. Whitehead is a good liar, there's another man with a scar on his face, or those witnesses were simply bluffing.

Hays and Roland take one of the teenage boys, Freddy Burns, in for questioning, since his prints were found on Will's bike. He admits to stealing the bicycle that afternoon and chasing the boy into the woods, where he soon lost him. But despite the detectives using scare tactics on the teenager boy, he doesn't cop up to anything else, instead fearfully sobbing. He doesn't appear to be anything more than a bully — at least at this point.

The Purcell kids were always telling their parents that they were going over to play with Ronnie Boyle at his house — the one with the new puppy — but as we later learn, the kids hardly knew each other. But that's all according to Mr. Boyle. Perhaps the kids were meeting out in the woods and playing there, unbeknownst to both sets of parents. And since we know that there were three sets of prints on the toys — one unidentified — it would make sense that the third person was a child, since they wouldn't likely have those prints on-file.

However, Ronnie was home all afternoon the day the Purcells went missing, so even if the Boyle kid was playing out in the woods on other days, he wasn't involved in whatever happened. There's also Mike, the boy who Julie waves to on her bike, but we don't know too much about him so far.

When Amelia goes over to the Purcells house to drop off some of the kids' art supplies, Lucy (Mamie Gummer) says some pretty implicating stuff. "This wasn't a very happy home," she tells Amelia. "Children should laugh, right? There wasn't a lot of laughter around here." Children should laugh, by the way, is part of what's written on the ransom note. Coincidence?

When Amelia says that everyone makes mistakes, Mrs. Purcell says, "Not like this. Not like I did." Later crying, "I have done such terrible things. God forgive me!" This seems like more than the words of a grieving mother, but we also know that Lucy overdosed and died in 1988 in Vegas, so if she did do anything, audiences may never hear her confession.

In Episode 4, the journalist Elisa Montgomery (Sarah Gadon) tells an older Hays that O'Brian's remains were found in a drained quarry in southern Missouri. As audiences know, he was Lucy Purcell's potentially creepy cousin, who stayed in Will's room and left those Playboys under the bed. Apparently he went missing in 1990, and since Mary mentions that they figured out whose remains they were based on prison dental records, it looks like O'Brian went to jail for something or other.

Hear me out — there's something very shady about the schoolteacher. Not only did she profit from Will Purcell's murder by writing a book about the whole case, but she worked closely with Hays on the investigation, which means she could have tampered with evidence if he'd gotten too close. "I started thinking, Will's death — could it have been an accident?" she asks Hays on what appears to be their first date. Does she know something that we don't? She obviously knew the Purcell kids, since she was a teacher, and they likely trusted her. Then there's the fact that Hays has these large holes in his memory — could he have solved the case, realized it was his wife, and somehow forgotten? There's also the fact that she's been known to go to new places and pretend to be new people (as she tells him in the bar that one night), which seems like a huge red flag.

So whoever was playing with the Purcell kids and whether the toys themselves turn out to be anything nefarious, there are several guilty-looking culprits. But since this is True Detective, that probably means it's none of these people, and it was someone else entirely.

More like this
'Killing Eve' & 'Doctor Who' Stars Just Joined The Cast Of 'True Detective' Season 4
By Brad Witter
On 'The Handmaid’s Tale,' Christine Ko Fights Back
By Gretchen Smail
'House of the Dragon' Episode 7 Might Mark The End Of House Velaryon
By Kadin Burnett
Twitter Is Pouring Out Some Zhampagne As ‘Schitt’s Creek’ Leaves Netflix
By Brad Witter
Get Even More From Bustle — Sign Up For The Newsletter