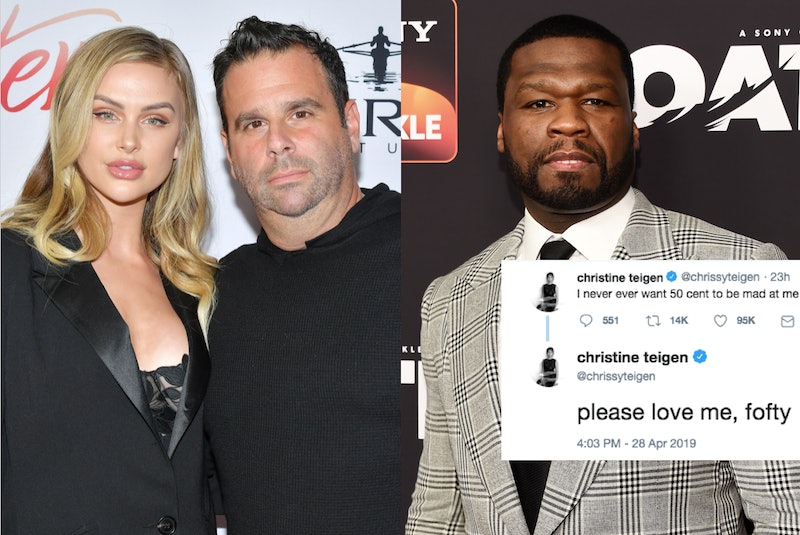 Now that Lala Kent is getting along with most of the Vanderpump Rules cast members, she may have even bigger fish to fry. Well, inadvertently at least. Curtis "50 Cent" Jackson had some very public beef with Lala's fiancé Randall Emmett, and it's been taking over the internet. What happened with 50 Cent, Lala, and Randall exactly? It's outrageous and complicated, but boils down to one thing: 50 Cent claimed the producer owed him $1 million. Even so, there was a lot of shade (and downright insults) in the rapper's onslaught of social media posts.

Luckily, the story has a somewhat happy ending, since on Monday, April 29, 50 confirmed that Randall paid him back in full and he started deleting some of the posts from the weekend. However, there are plenty of screenshots to help fans piece this saga together. (Bustle reached out to reps for Randall, Lala, and 50 Cent for comment on the whole situation, but did not receive an immediate response.)

Let's get back to the beginning: On April 25, the rapper shared a clip from a recent Vanderpump Rules episode. In the video, Lala talks to Stassi Schroeder about her first encounter with her producer beau. Lala admitted that she let Randall "hit it on the first night" and claimed he gave her a Range Rover the next day.

50 did not post the video as a superfan of the show. Instead, he captioned it with an insult: "10 seconds left in the 4 quarter hoe’s are Winning. Do you want A range rover, yes, b*tch yassss. Then just run out and suck a dick. LOL smh."

Lala posted and deleted an Instagram Story, where she said she was "disgusted" and "in shock" by 50's social media behavior. She even accused him of "diminish[ing] the validity of the #MeToo movement." (According to The Cut, 50 Cent originally referred to the Pump Rules clip as "ME TOO ROLE PLAY" in the comments section, and that's likely what Lala was referencing.)

Despite Lala weighing in, that did not stop the rapper from going in on the reality star and her man. On Twitter, the "Candy Shop" rapper shared that the producer paid him $250K since he started posting on social media. Still, he wanted the rest of the debt paid by Monday.

In the text screenshots, Randall apologized profusely and accidentally referred to the rapper as "Fofty." Oh, autocorrect. He really should have spell-checked that, especially since everyone began jokingly referring to the rapper as "Fofty" going forward. After that, 50 spent most of the weekend posting memes about the debt and his new nickname. In another since-deleted post, 50 told his followers, "look at this fool taking selfies, you better get me my money fool."

That wasn't the only photo of Randall that the rapper shared. He actually posted (and deleted) a picture of the producer in the hospital and harshly captioned it, "Your [sic] not gonna die before Monday @randallemmettfilms go ahead knock your self out. LOL."

50 wasn't the only one posting about this beef, though. Someone even edited Randall's Wikipedia page to include, "He owes 50 Cent (aka Fofty) a million dollars by Monday or else. He’s faked a heart attack to get out of this thus far." Wow, changing the Wikipedia page is some next level petty.

Bravo superfan Chrissy Teigen even chimed in on the social media rampage. She said what everyone has been thinking all weekend: "I never ever want 50 cent to be mad at me." Same here, girl.

However, it seems like she has nothing to worry about. The rapper has nothing but love for the model and her husband John Legend, as he later posted the tweet below.

Even though 50 now has his money back, he did manage to profit from the feud. 50 Cent capitalized on the publicity by selling t-shirts emblazoned with screenshots of Randall calling him "Fofty."

Now, that all of the Instagram posts are gone, it seems like the feud is over. Especially since 50 posted one more screenshot and wrote on Twitter:

"I got my money, so I have no problem with Randall Emmett, in fact I’m wishing him and his family a very blessed day. positive vibes now guys. LOL #lecheminduroi #bransoncognac #bellator"

But what about 50 and Randall's relationship now? Are the "I'm sorry FOFTY" texts and repaid debt enough to revive their friendship? Only time — and future social media posts — will tell.

More like this
Twitter Has Renamed Ekin-Su After *That* 'Dancing On Ice' Performance
By Sophie McEvoy
This Pre-'Love Island' Video Of Olivia & Zara Together Changes Everything
By Bustle UK
Twitter Can’t Make Up Its Mind About Ekin-Su’s 'Dancing On Ice' Skate-Off
By Sophie McEvoy
Twitter Has No Chill As The 'Love Island' Villa Descends Into Chaos
By Darshita Goyal
Get Even More From Bustle — Sign Up For The Newsletter
From hair trends to relationship advice, our daily newsletter has everything you need to sound like a person who’s on TikTok, even if you aren’t.