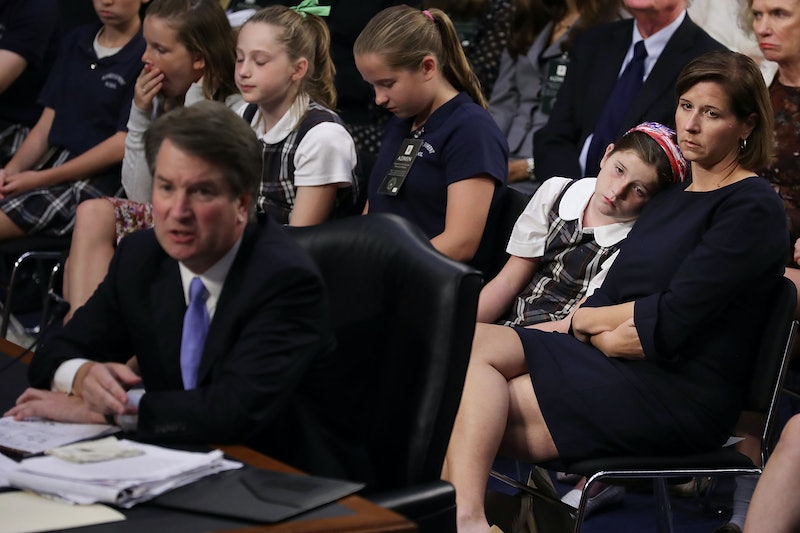 Amid the sexual misconduct allegations against Brett Kavanaugh (which he has denied) and Thursday's hearing on them, the Senate Judiciary Committee has scheduled a Friday morning vote on his nomination. If Kavanaugh is confirmed, what happens after that is likely to be a fast series of events leading to his place on the most esteemed bench in the land.

The vote on Friday would come just one day after the committee plans to hear testimony from Kavanaugh and Dr. Christine Blasey Ford, one of the women who has accused the 53-year-old nominee of sexual misconduct. Kavanaugh has denied all allegations against him.

With the committee vote happening on Friday, things could pick up speed from there. The Senate Judiciary Committee's vote is technically a recommendation to the full Senate. From there, it can put forth a favorable, negative, or no recommendation at all, according to the National Constitution Center. Once that recommendation is sent on, Senate Majority Leader Mitch McConnell will schedule the full senate vote. The average number of days, recorded since 1975, it has taken for the Senate to confirm a SCOTUS nominee once receiving a recommendation has been eight days, per the National Constitution Center citing the Congressional Research Services.

Senators will have time for floor debate, though Democrats will have one weapon missing from their arsenal: filibustering won't be allowed since the Senate nuked that option last year, when Republicans changed the procedural rules to garner the necessary votes needed for Neil Gorsuch's confirmation.

After the vote, and assuming Kavanaugh is confirmed, the secretary of state is notified of the approval. A confirmation letter is then sent to the White House for President Trump to sign, according to the National Constitution Center. That document would then be given to the new Justice.

From there, it could be a matter of days. For Gorsuch, the time between his confirmation and swearing-in ceremony was a weekend. Trump's last SCOTUS pick was confirmed on Friday, April 7 and sworn in on Monday, April 10.

If he were confirmed, Kavanaugh would be honored in two swearing-in ceremonies: one in which he takes a judicial oath administered by a current Supreme Court Justice and the other in which he takes a constitutional oath. The latter would be a formal, public ceremony with President Trump present to make remarks, according to The Heritage Foundation.

But even if Kavanaugh is confirmed, the sexual assault allegations against him might not go away if November goes to the Democrats, according to NBC News. Senator Chris Coons has said if the Democrats manage to take control the Senate after the midterm elections, they might investigate the claims further.

"If he's confirmed, and these allegation are not treated fully and fairly and investigated, then there will be a cloud over Judge Kavanaugh's service on the Supreme Court," Coons said.