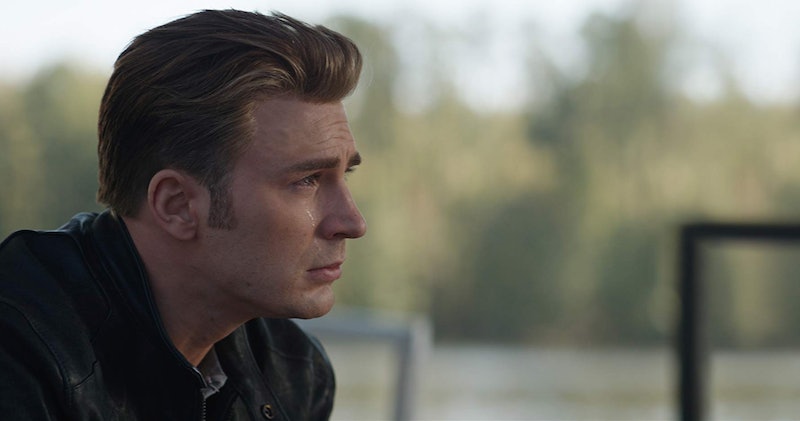 Avengers: Endgame is so close, coming out on Apr. 26, and fans can't stop theorizing about what will happen to the remaining Avengers. Many of the main characters met a grim fate in Infinity War. Gamora and Loki were killed off in the traditional sense early on in the movie. And then moviegoers saw Spider-Man, Black Panther, Nick Fury, Star Lord, Scarlet Witch, and others turn to dust. Hopes are high, however, that those who were dusted can be recovered. But that doesn't mean that there won't be any permanent deaths in Endgame. This one will be the final installment for many of the original Avengers — but what happens next if Steve dies in Endgame?

CinemaBlend guessed that Captain America will sacrifice himself to stop Thanos, a theory supported by the Infinity Gauntlet comic series, which has him facing Thanos by himself. Another theory that makes sense is that he'd somehow return to the 1940s and marry Peggy. The trailer shows Steve holding his picture of Peggy, hinting at her having a big role in his Endgame arc.

One of the reasons why fans are preparing themselves for Steve's swan song is that Chris Evans told The New York Times that Endgame would be his last time playing Cap. Last fall, once he was finished with his work on the film, the actor shared an emotional tweet looking back at nearly a decade of portraying the beloved hero.

But while there's a big chance that this'll be the end of Steve Rogers' story, that doesn't mean that Captain America's arc is done. One popular is that Bucky would take over as Captain America onscreen, as he wears the mantle in the comics as well. And Sebastian Stan has been teasing this for a long time too.

Nerdist reported that back in 2016, Stan told the audience at the site’s Captain America movie marathon that he was told he’d eventually graduate from being the Winter Soldier to becoming Captain America. “You know, I was sitting there in a room with [Marvel] and basically they were saying to me that this is what's gonna happen: He's gonna be the Winter Soldier, and then eventually he's gonna become Captain America," Stan said. "And I was like, 'That sounds great,' but they weren't at any point telling me what they are gonna do. They still aren't."

In the aptly titled 18-issue comics arc The Death of Captain America, Steve's death comes at the hands of the Red Skull, who ordered his assassination. Tony Stark and Black Widow decide to track down his killers and get their revenge. Bucky, however, considers Tony to be the cause of Steve Roger's death, so he sets out on a mission to kill him.

But Tony had received a letter from Steve before his death, saying that Captain America's legacy should continue with Bucky. And instead of killing Tony, Bucky decides to fill in for the role. He serves as Captain America until Steve makes his triumphant return in Captain America Reborn.

As for what that would mean for MCU's Phase 4, Stan has some ideas. During an appearance on BUILD Series, the actor discussed what it would be like for Bucky to take over for Steve.

"In the comic books it was always interesting because there's an emotional turmoil, there was a guilt there that was driving for me, a character, because, because it's Steve's absence, you know, it sort of felt like the guy had to once again carry on this [...] vision that his best friend had for years and what he stood for," explained Stan. "And that struggle have that kinda coming into conflict with someone who's still grappling with their own past and what you know is the right thing to do now and if you have a character who's always searching and forgetting an identity and finally gets an identity only to have to lose it again to an idea, then it makes it for the complex take on it."

But Bucky isn't the only one to become Captain America in the comics. Sam Wilson takes over for the hero in Captain America Vol. 7 when Steve is deprived of the super-soldier serum.

ScreenRant published a theory that instead of Bucky, Anthony Mackie's Sam will be the one to become Captain America in the MCU. Since Falcon was the one to fill in for Steve most recently in the comics, there's a high chance the Marvel movies will want to follow that rather than bringing up stories from older issues.

Another piece of evidence that ScreenRant mentions in support of Falcon becoming Captain America is that Bucky seems to be headed in a slightly different direction than before, making it difficult for the story to steer him in the direction of being Captain America. In the post-credits scene in Black Panther, we see him adopting a new moniker of White Wolf, implying that he'll focus on protecting Wakanda rather than following his friend's footsteps.

It's very likely that this will continue in the MCU, considering both Sebastian Stan and Anthony Mackie's contracts are still ongoing for several more movies, per Den of Geek. It'd be a shame to see Chris Evans leave for the franchise good, but having either Bucky or Sam get their chance to shine doesn't sound too bad, either.