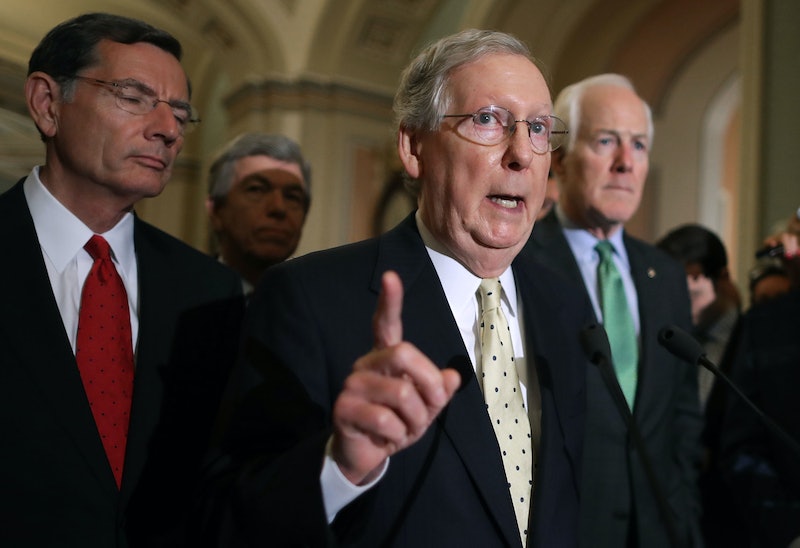 On Tuesday, after months of starts and stops, Senate Republicans will finally bring their health care bill up for a vote. As of this writing, it's unclear exactly what legislation will be brought up for consideration — Senate Majority Leader Mitch McConnell hasn't yet announced which of several Obamacare repeal bills he'll be bringing up for a vote. It's also not clear if he has the votes for it to pass. However, even if the Senate health care bill fails, that doesn't necessarily mean Obamacare is safe from future repeal efforts.

The Senate's seemingly-endless list of arcane rules and procedures will largely dictate what happens when the bill comes up for a vote on Tuesday. But the upshot is simple: If this bill fails, McConnell can bring either it or a similar piece of legislation up for a vote again at a later date, simply because nothing in the Senate rules prevents him from doing that.

The question is whether or not McConnell will actually hold another vote. But on Sunday, Republican Sen. John Thune said that if the Tuesday vote fails, Republicans will go "back to the drawing board" and try to figure out another means of repealing Obamacare. Although Thune is only one senator, he is a member of Republican leadership, so his words carry some weight. It does appear, at the very least, that Senate Republicans are leaving the door open to another health care vote if Tuesday's fails.

It's impossible to say whether the vote will fail, however. For one, there are many different Republican health care bills floating around the Senate, and according to multiple reports, McConnell hasn't even told his own members which one of them will come up for a vote.

Having said all of this, there are some plausible reasons why the GOP might not revive its Obamacare push if it doesn't pass a bill Tuesday. For one, the party has already expended seven months' worth of political capital on this legislation with nothing to show for it. And every day Congress spends haggling over health care is a day it's not working on tax reform, one of the party's longest-standing policy priorities.

More importantly, the fundamental dynamics of repealing Obamacare haven't changed. Senate Republicans need 50 votes in order to even partially repeal the Affordable Care Act, but it's quite possible that those votes simply don't exist. To put it differently, it may be impossible to draft a bill that's conservative enough for conservative Republicans to support, but moderate enough to attract moderate Republicans.

Still, Obamacare repeal has come back from the dead on more than one occasion. If the GOP health care bill does go down on Tuesday, it may only be a matter of time before it rises from the grave yet again.