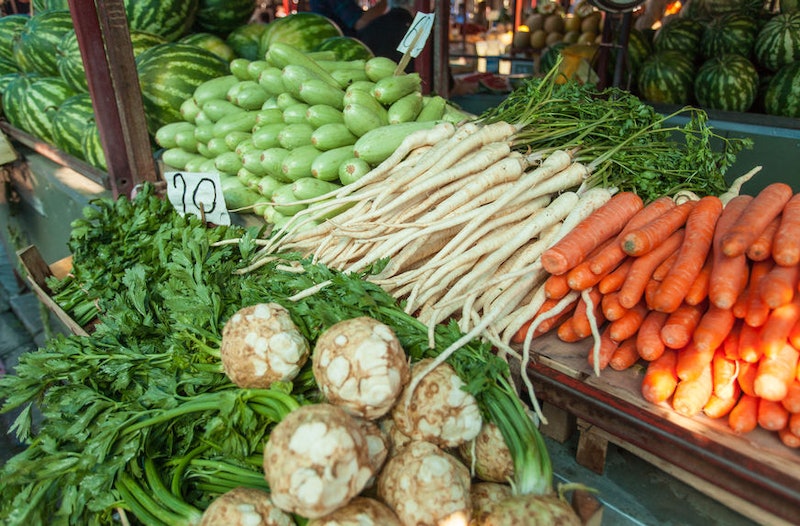 The prospect of a no-deal Brexit is surrounded by a lot of uncertainty, including whether the UK will run out of necessities such as food. As a country that relies heavily on imports, it's not difficult to imagine how a no-deal could effect the availability of certain products, as CNN highlighted in a recent report. So, what happens if there's a food shortage after Brexit, and are there any procedures in place to avoid a shortage occurring in the first place?

As CNN reports, CEO of the UK Food and Drink Federation Ian Wright has warned that in the event of a no-deal, the public could see "the random disappearance of products and well-known brands from shelves because supply has been interrupted." This is because the UK relies on an import system where food is "moving all the time", as Shane Brennan, Chief Executive of the Food Storage and Distribution Federation told Wired last August. "If you delay a lorry by two minutes at Dover you cause tailbacks of around 30 miles," he explained. "That's going to cost us a lot of money and change the way we eat fundamentally."

Food imports are crucial to British diets — if the country were to begin sustaining itself on only British-grown produce at the beginning of the year, this produce would run out buy August 7 of the same year, according to research conducted by the National Farmers Union. And to be honest, this really isn't that hard to believe. According to government figures provided by the Food and Drink Federation, CNN reports that the UK is only "60 per cent sufficient when it comes to food," with "70 per cent of its food imports [coming] from the EU." I mean, you only have to walk down the fruit and veg aisle of your local supermarket to see the amount of produce imported from European countries lining the shelves.

The government has put contingency plans for "stocking up on essential goods" in place, as The Independent reports, and Theresa May stated that "people should take reassurance and comfort from the fact that the government is saying we are in a negotiation" and that they are "working for a good deal" in an interview with Channel 5 in July 2018.

She continued, "This is not just about stockpiling. That concept, what it is, is about making sure that we continue to do the things that are necessary once we have left the European Union, if we leave without a deal."

And while that's sort of comforting to hear, that doesn't mean you don't shouldn't prepare for the worst outcome. The likes of Tesco and Aldi are already considering putting stockpiling plans in place, as iNews reports, as "the biggest single challenge will be in a no-deal scenario and what happens with fresh food," Tesco chief executive David Lewis said. "The possibility of stockpiling fresh food is very, very limited."

I mean, it's better to be prepared than not prepared at all, right?