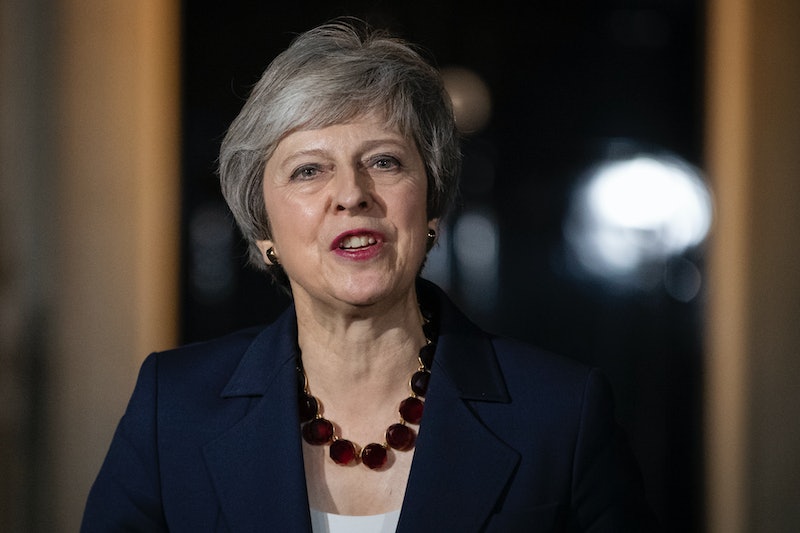 The UK has finally reached Brexit crunch point. Theresa May secured a withdrawal deal which she needs to get through parliament. But first she had to try and to get her cabinet on board. On Wednesday after five-hour meeting (and you thought your work catch-ups ran on) she said she’d secured cabinet’s backing. Except there were reports that at least a third of her ministers were against it. Fast forward to Thursday, with resignations of senior ministers left, right, and centre, a change in leadership looks likely. But what happens if Theresa May faces a vote of no confidence? Well buckle up because it gets pretty bumpy from here on out.

How Is A No Confidence Vote Triggered?

According to Sky News, in order to trigger a vote of no confidence, 15 percent of Tory MPs (which is 48 at the moment) must write to chairman of the 1922 committee, Sir Graham Brady, expressing a lack of faith in May's leadership. The 1922 committee, which is made up of Conservative backbenchers (MPs who do not have a role in cabinet), would then decide whether to hold the vote.

Will There Be A General Election?

Potentially. As the i Paper reports, if May survives the vote of no confidence (she'd need the backing of at least 50 percent of her party's MPs), then there's unlikely to be one. However, according to the Evening Standard, if she doesn't gain enough support, the Conservative Party would need to find new leadership. There would be a two week changeover period in which May would continue to govern until new leadership was established.

The publication also reports that forming a new government might require "some cross-party allegiance," which means the Tories would have to look to members of the Labour Party, DUP, or SNP for support. However, if there is not enough backing (and given that Jeremy Corbyn called for a general election earlier this year, there is unlikely to be), a general election would need to be held in order to secure enough public support for a party to lead.

What About A People's Vote On Brexit?

After May stated on Wednesday night that the choice was between her deal, no deal, or no Brexit, many Remainers felt optimistic because it's the first time the Prime Minister has acknowledged the possibility that Brexit can be stopped. But what are the chances of a People's Vote actually happening? At this point in time, it's difficult to say because it depends on whether May will last long enough as Prime Minister to get her deal accepted by Parliament.

If she does last that long and the deal isn't accepted (which looks likely considering she is struggling to get it past her own cabinet), according to the i Paper, she might back a second referendum in order to try and avoid a no deal Brexit. However, if a vote of no confidence occurs before then and a general election is called as a result, a second referendum's chances would depend on whether any of the main parties decided to back it in their manifesto. If they did, and that party was voted into power by the public, then a second referendum would still not be guaranteed. According to the Financial Times, a referendum act would need to be passed and the deadline for leaving the EU (March 29, 2019) would need to be extended to allow time for a vote to take place.

Would A Vote Of Confidence Make A No Deal Brexit More Likely?

At the moment, according to the New Statesman, because so few MPs consider no deal to be an acceptable option, it seems unlikely that we will crash out of the EU with no agreement in place. However, the publication also reports that recent events, specifically the resignation of Brexit Secretary Dominic Raab, have made a no deal Brexit scenario more likely. According to Sky News, as May's deal seems unlikely to get through parliament and with only four months until the UK is due to leave the EU, there's hardly enough time to select a new government, renegotiate another deal before the March 29 deadline. The chaos that would be caused by a vote of no confidence increases the chances of no deal.