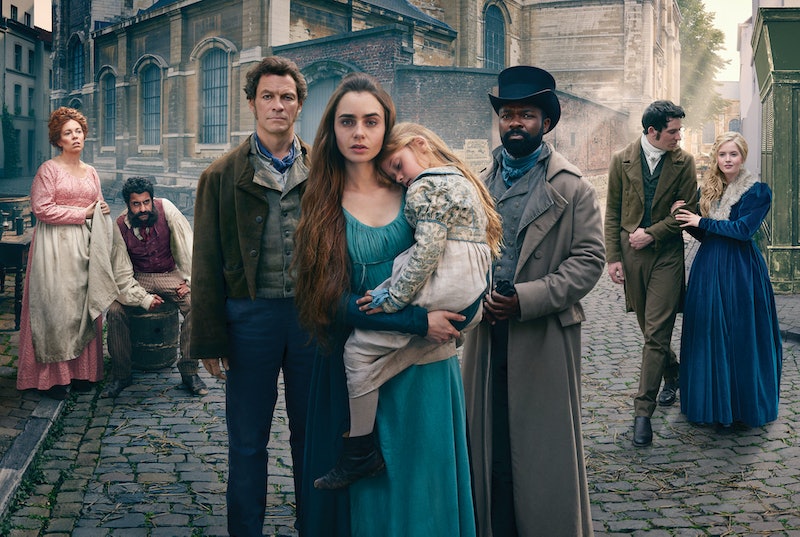 When I hear the words Les Misérables, my mind often casts to the musical first and the film adaptation second. What I seem to almost always forget is that this story started life as a novel, and a long novel at that. Written by French author Victor Hugo (who also penned The Hunchback Of Notre-Dame), the story takes place in France during the early to mid-19th century, focusing on the lives of several characters whose lives intertwine through a series of coincidences and happenstance. So, exactly what happens in the Les Miserables book?

As much as I would love to do a deep dive into the world of this literary classic, there is way too much info to cover and spoil. Instead, I'll give you a quick low-down on the main players of the story, and what Hugo tried to accomplish with the narrative.

The story begins in 1815, and mainly follows Jean Valjean, an escaped convict who was sentenced to nineteen years in prison after stealing a loaf of bread for his sister, and for attempting to escape incarceration. He tries to begin life anew, but struggles as he is a former convict. Eventually, he is saved by the Bishop of Digne, but is constantly followed by a policeman called Javert, who is constantly suspicious of Valjean's actions and seeking to return him to prison.

Les Misérables also focuses on a woman named Fantine, the mother of Cosette, and illegitimate child. Fantine gives her daughter up to Monsieur and Madam Thénardier, as she is unable to care for. She continues to send funds to pay for her daughter, but finding the money becomes challenging after she loses her factory job. Sending her hair and two front teeth as payment to the Thénardiers, she eventually turns to prostitution. Finding herself arrested after attacking a man who is mocking her, Valjean discovers her story and gets her sent to hospital, where she dies of shock upon learning from Javert that Valjean is actually a criminal.

Fantine is raised by the Thénardiers with their five children who include Éponine — who later falls madly in love with Marius — Gavroche, and Azelma. The Thénardier's treat Cosette horribly — while the musical turns them into comic figures, in the novel they are more straightforwardly bad. When Cosette is 8 years old, Valjean manages to rescue her from their care and take her under his wing.

The story ends during the 1832 June Rebellion in Paris. There we meet Marius, an idealist student who involves himself in the rebellion, where an attempt was made to abolish the monarchy. Marius is also in love with Cosette. After he nearly dies in the fighting, and is rescued by Valjean via the city sewer, the pair marry. Discovering Valjean's criminal past, Marius attempts to separate Cosette from him, though the pair are eventually reconciled when they discover that Valjean made his money through honest means.

Throughout this plot, Thénardier remains a disruptive force, trying to blackmail Valjean for "killing" Marius. Thénardier was in the sewers when Valjean rescued Marius, and he opens the gate to let them out in return for the contents of Marius' pockets. Thénardier assumes Valjean has murdered Marius, and rips a section of Marius' jacket to blackmail Valjean with later, but it's in producing the garment later that it's revealed Valjean actually rescued Marius. Given Thénardier's clear criminal behaviour, Marius instructs him to leave the country or face jail; he heads to America and becomes a slave trader.

While there are a lot more intricacies to the characters and their relationships, the narrative mainly focuses on Valjean and his attempts to live a normal life while escaping the clutches of Javert, who is always seemingly lurking in the shadows. The story ends with Javert coming to realise that Valjean is a good person — as well as a criminal. This is after Valjean refuses to execute Javert when given the opportunity, rescues Marius, and offers to surrender anyway. Confused about the conflict to his value system, Javert abandons his attempt to bring Valjean to justice, and wanders the streets of Paris before drowning himself in the Seine.

Aptly described by the Guardian as "a game with destiny", Victor's Les Misérables is a piece of fiction that can always be relatable. Whether it's 19th-century France or 21st-century England, a solution never seems to be found for the plight of the impoverished. "It dramatises the gap between the imperfections of human judgements, and the perfect patterns of the infinite," the Guardian explains. "The reason for including so much of the world's matter was to work out how mystical the world was."

And that's what the creative team behind the BBC adaption are striving to explore and convey on screen. "My ambition was to make sure that this felt like a big canvas," director Tom Shankland told the BBC in a press release, "on which we were telling intimate and small stories of individuals from a turbulent period of French history from 1815 to 1832, and the failure of the uprising.

"We're always keeping an eye on the heroes and their challenges in life, but it was important to me that we're setting it on as big of a canvas as possible."

With six one-hour episodes in this mini-series, I think this'll be one of the most detailed explorations of Hugo's novel to date.