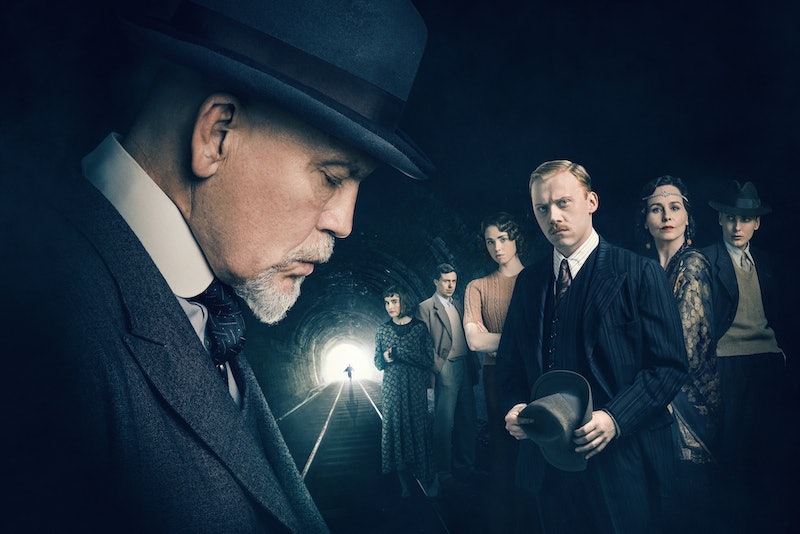 If I had to choose between an hour of laughs or a murder-mystery during the festive season, I'd usually go for the comedy. But that's totally going to change this Boxing Day thanks to the premiere of the latest Agatha Christie adaption. I mean, how could I miss the incomparable John Malkovich as iconic detective Hercule Poirot hunting a meticulously sadistic serial killer? But what happens in The ABC Murders book and more importantly, how will the nation react to a Poirot without that twirly moustache?

Published in 1936, The ABC Murders tells the tale of a very specific kind of serial killer — one who is committing murders in the order of the alphabet, and is kindly leaving behind a copy of The ABC Railway Guide with each of his victims as a clue. The killer is also sending letters to Poirot, signed A.B.C., to taunt the detective.

The novel also features Captain Arthur Hastings, Poirot's close friend who often provides insight into the detective's cases through a first-person narrative. The ABC Murders is told from Hasting's perspective, but also features some experimentation on Christie's part as some of the chapters are told in third-person when Hastings is absent during a significant event.

For James Prichard, Christie's great-grandson and Chairman of Agatha Christie Limited, it's this unusual structure and the novel's gripping plot that make it perfect for adaptation. "It is one of the greatest plots and stories that she wrote and has a larger canvas than many of her other stories, in that it covers the whole United Kingdom," he said in a press release sent to Bustle UK. "It's not your traditional country house mystery."

Adapted to screen by Sarah Phelps, The ABC Murders marks the screenwriter's fourth Christie adaptation for the Beeb, and it's a story that spoke to her for some very dark reasons. "What was appealing about The ABC Murders for me is that it had a serial killer at its heart. A killer who is an anonymous, faceless, deranged murderer roaming the length and breadth of Britain, communicating with Poirot letters."

She added: "I just thought that's very tempting to make, I don't know why, it just appealed to some dark thread within me. Also because I never really wanted to write a sleuth before and never wanted to do a Miss Marple or a Poirot; I like it when there is no one there to answer the questions."

There's also a tragic beauty with this story, as it explores an ageing Poirot and the person he is, well, behind the moustache. "I want to know who is hiding behind that mask and why he hides there," Phelps said, and I agree. Uncovering the true motives and intricacies of well known characters has always been fascinating to me, and I for one cannot wait to see how Phelps explores this side of Poirot, and how Malkovich portrays it.

The ABC Murders premieres on BBC One at 9 p.m. on Boxing Day.