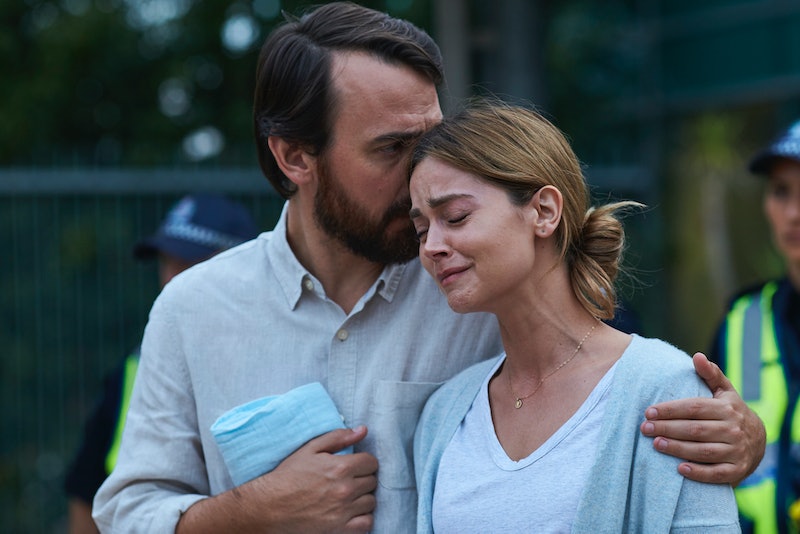 The Cry is the new BBC drama that has broken the Internet. The nail-biting launch episode left viewers on the edge of their seats wondering what happened to baby Noah; was he kidnapped? Is he still alive? But it'll be a while until we get answers. However, the series is based on book, which so far, it's followed pretty accurately. So, what happens in The Cry the book? Can the novel give us any clues about what's in store?

In the same way that the series began, the novel, penned by Australian writer Helen Fitzgerald, opens with Joanna, Alistair, and baby Noah making the journey from Scotland to Australia so that Alistair can fight a custody battle against his ex-wife in order to gain access to their daughter.

Let's be honest here, 30 hours on a plane is hellish enough when all you have to think about is how it will dehydrate your skin and the fact that the food selection is less than ideal. But with a small baby, it seems impossible. So it's no surprise that Joanna, who is suffering with post-natal depression, struggles. You can feel the stress seeping out of the pages.

However, eventually, they finally arrive Dow Under. But once they land on the ground, both Joanna and Alistair are at their wits end. There is a sense of foreboding as the family leaves the airport but as a reader, it is impossible to predict what is about to come.

The family then climb into a hire car and drive away from the airport, as Fitzgerald lulls you into a sense of security. However, moments later, everything changes. On route to their house, they stop off at a convenience store to pick up some groceries. While popping in and out, they decide to leave baby Noah in the car — however, they forget to lock the doors. When they come back with their shopping, Noah is gone.

What proceeds is every parent’s nightmare; the search, the inquest, a social media fire storm, and the possibility that their child is dead. As Joanna tries desperately to not lose grip of reality, Alistair's reaction is suppressed and suspect. Almost calculated, he is very concerned with keeping up appearances.

Yes, the book is as dramatic as it sound and just like the TV show, the first few chapters leave you with so many questions; did Joanna kill Noah? Did Alistair's ex-wife take the baby? Has a stranger kidnapped him?

The Cry by Helen Fitzgerald
Amazon

Just a heads up, there are lots of spoilers about to come your way.

Turns out, when Joanna and Alistair were at the airport, they were asked to remove some mysterious medicine from their hand luggage, which they seek to replenish as soon as they get to Australia. As the police and media turn to them as potential suspects, it is revealed that Alistair served a fatal overdose of this medicine to his child before Noah died — and the couple covered it up as a kidnapping. Not that Fitzgerald reveals that until the very end.

Fitzgerald, who has enjoyed success with many of her other thrillers including The Exit and My Last Confession, has said that The Cry was inspired by her own struggles as a new mother. Speaking to The Herald she said:

"It’s a common sign of post-natal depression, the feeling that everyone else is coping. I was obsessed with child- rearing books too, desperate to be right. We were in the back seat of the car and I was doing that thing of don’t look at the baby in case she starts to cry again. Then I turned around and looked at her and she was just sitting there, smiling at me. That was the moment; the one that happens for most mothers at birth."

If you have enjoyed The Cry on the telly so far, then you have to read the book. It is gripping, thrilling, and seems to go to places where you think it can’t get much worse and then it does. I can’t wait to see what the rest of the series has to offer, but if you are looking for a thriller to keep you in on these cold autumn nights, The Cry is exactly that — so long as you're not afraid to shed a few tears that is.

More like this
Lib & Will’s Romance In 'The Wonder' Is Very Different From The Book
By Sam Ramsden
'Bridgerton' Fans Will Love ITV’s 'The Confessions of Frannie Langton'
By Maxine Harrison
Kate Winslet Spoke Candidly About Filming A TV Series With Her Daughter
By Sabah Hussain and Sam Ramsden
Our First Look At 'Vardy V Rooney: A Courtroom Drama' Doesn’t Disappoint
By Bustle UK
Get The Very Best Of Bustle/UK