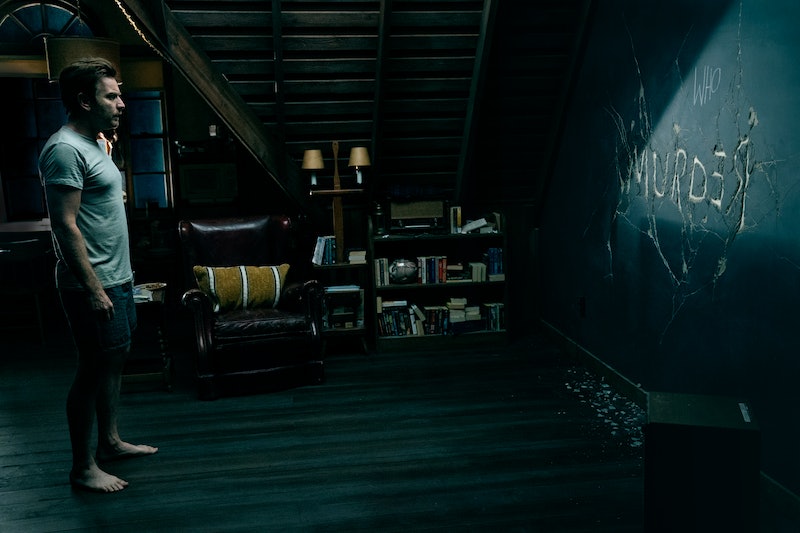 Doctor Sleep, which premieres on Nov. 8, isn't a straightforward sequel to Stanley Kubrick's 1980 film, The Shining. That adaptation of Stephen King's 1977 novel isn't a favorite of the author's, as it changes some significant plot points, including the way that The Shining book ends. Still, it's a beloved horror classic. To serve fans, filmmaker Mike Flanagan's movie version of King's 2013 sequel novel includes some elements from Kubrick's take and thus, makes some changes to the plot of the Doctor Sleep book. Book spoilers ahead!

"It was a question of how do we try to combine those two worlds in a way that’s going to make Stephen [King] feel really satisfied with what we did, and also honor the legacy of the Kubrick film and what it means to cinephiles, one of the most influential, the most influential horror movie of all time," Flanagan told press at a set visit last year, per Slash Film.

Now an adult, Dan Torrance (Ewan McGregor) is struggling with addiction, like his father Jack. He moves to a small town in New Hampshire in the hopes of finding peace and winds up working at a nursing home, where he uses his remaining "shining" powers to comfort its elderly residents before they draw their last breath — thus earning the nickname "Doctor Sleep." Via their psychic connection, he meets a young girl named Abra (Kyliegh Curran) who has an even more powerful shine. She enlists his help to defeat a group called he True Knot, who prey on children possessing the shine in order to gain immortality. This forces Dan to face his demons down and return to the Overlook Hotel.

And here's where Doctor Sleep sharply diverges from the book on which it's based. Kubrick's The Shining leaves the Overlook Hotel still standing, while it burns to the ground in the novel. "It seemed like such a wasted opportunity to revisit Dan Torrance and not revisit the Overlook Hotel," Flanagan also said during that set visit.

As does the film, the Doctor Sleep book checks in with a young Danny, still psychologically traumatized from the events of the Overlook, but trying to move on with his mother. Though the Overlook Hotel no longer stands, the ghosts won't leave him alone. So Dick Halloran, teaches Dan how to keep them away by imprisoning them in his mind. His father's issues also follow Dan into adulthood, but he eventually finds meaningful employment, a quiet life, and an AA community.

The book delves further into Abra Stone's life than the movie does, starting from when she was a toddler. After she psychically witnesses the True Knot murdering a young boy, she uses her bond with Dan to ask for help. The True Knot develops a disease that kills off their numbers, and their leader Rose the Hat becomes determined to kidnap Abra, absorb her extraordinary power, and hopefully "cure" her people.

Dan agrees to help and tells Abra's father and their family doctor about their unique connection. Along with Dan's friend Billy, they successfully defeat the first round of kidnappers. But Rose and her group are relentless; they keep coming.

Dan visits Abra's great-grandmother, planning to extract her steam and use it to defeat the True Knot. But he doesn't expect the dying woman to reveal that he and Abra's mother have the same biological father. This explains why Abra and Dan are so intimately connected.

With her steam, Abra and Danny lure Rose to the location where the Overlook Hotel once stood — but Abra is astral projecting, not physically present. Once the True Knot take the bait, Dan releases her great-grandmother's cancerous steam, which kills the group, leaving, only Rose still standing. The villain but is no match for the combined psychic abilities of Dan and Abra. Assisted by Billy and the ghost of Jack Torrance, they're able to push Rose off the overlook. The book ends with a flashforward to when Abra is 15 years old and Dan warns her not to fall into the same cycle of alcohol use disorder that he and his father did.

Despite the differences between the book and the movie, King is quite happy with how Doctor Sleep turned out. In a Fandango featurette, the author praises Flanagan's work. “By taking Dan Torrance’s story as a grown up and filtering it through his own large heart, Mike has been able to take the Kubrick movie a step further," he says.

Of course, nothing can completely recreate the dark, fantastical world King created in his books. Seeing the movie and reading the novel it's based on is the only way to be completely immersed.