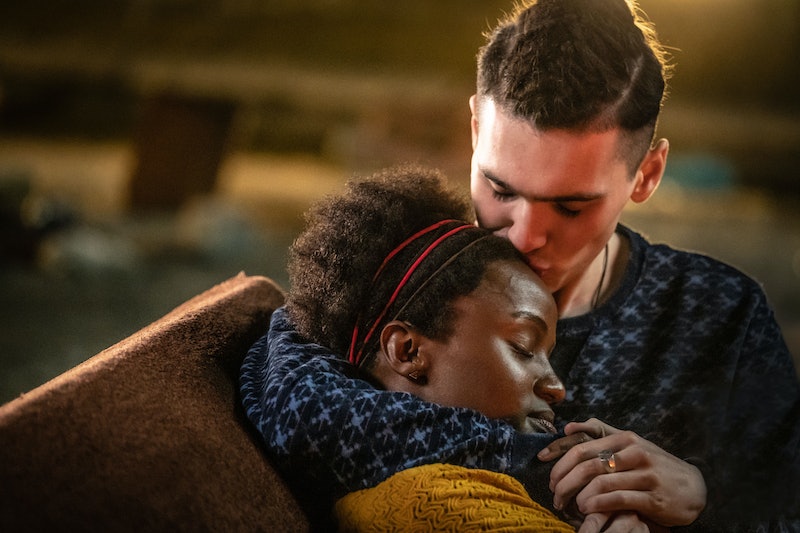 Novels being adapted for TV isn't exactly a new phenomenon. But some adaptations get more hype than others. Alongside BBC Three's Normal People and Netflix's To All The Boys sequel, Noughts & Crosses is one of the most hotly anticipated adaptations of the year. Many viewers will have already devoured the book cover to cover, but for those who haven't, there may be a few questions about the Noughts & Crosses book ending and whether it matches up to what the BBC series portrays.

Needless to say: spoiler alert. Those who're keen on a surprise at the end of the show should stop reading now.

In the final chapters of Malorie Blackman's novel Noughts & Crosses, protagonists and star-crossed lovers Callum and Sephy are left with an impossible decision after she becomes pregnant. Callum has been arrested for his involvement in kidnapping Sephy and, as a result, sentenced to death. While awaiting his hanging, Sephy's extremist father visits him and says that if he can convince Sephy to have an abortion, his sentence will be commuted to a prison stay instead. Sephy is given the same choice but the pair decide their baby must live. So they choose Callum's death over losing their child and he's executed. He dies professing his love for Sephy and hearing the echo of her loving words in his ear. Sephy gives birth to their child, a baby girl named Callie Rose McGregor.

Noughts & Crosses was first published in 2001 and tells the story of two young people in love. Sephy is part of the Crosses the dark-skinned ruling class, while Callum is a Nought – a ‘colourless’ member of the underclass who were once slaves to the Crosses. The two have been friends since childhood and eventually form a romantic bond, which is not only taboo, but also highly dangerous.

Director Koby Adom spoke to the BBC about his upcoming adaptation, saying, "It's talking about race, class, all these different departments of life that we face every day, and trying to put love about all of that, give that message that if everybody did love, there would be a lot more unity."

The TV series based on the book will star Jack Rowan as Callum and Masali Baduza as Sephy. British rap sensation Stormzy stars as Kolawale, a role created for him.

Watch Noughts & Crosses from March 5 on BBC One at 9 p.m.

More like this
The Song At The End Of 'The Last Of Us' Ep 1 Has A Deeper Meaning
By Sophie McEvoy
Rupert Grint Just Shared A *Major* Update About Ron Weasley’s Future
By El Hunt
Everything To Know About The 'Daisy Jones & The Six' TV Series
By Maxine Harrison and Brad Witter
Turns Out George Clooney Is A Huge Fan Of This Classic British Game Show
By El Hunt
Get The Very Best Of Bustle/UK
Sign up for Bustle UK's twice-weekly newsletter, featuring the latest must-watch TV, moving personal stories, and expert advice on the hottest viral buys.