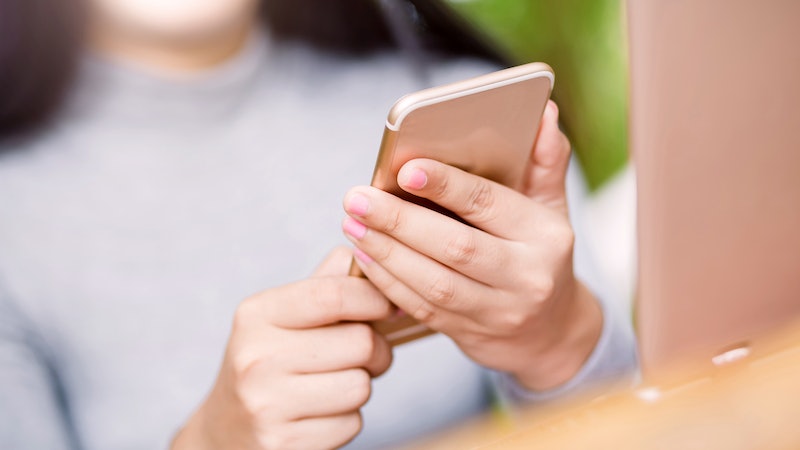 You're scrolling through your social media because that's what one does on the grocery line or during holiday commercials no one actually wants to watch. And then it happens — a Tweet, a Tumblr post, whatever it is, that takes the breath out of you in all the bad ways. It's infuriating, or it's sad, or it's just plain hurtful, and suddenly your whole day feels off. That’s because seeing a negative social media post can influence your brain, and over time, this can have cumulative effects, experts say.

Whether the posts you’re looking at are negative (sad news about a friend) or positive (an adorable puppy), when you anticipate looking at your notifications, your brain releases a chemical called dopamine. Often associated with the “reward pathway” of your brain, this neurotransmitter preps your brain to get happy. According to Dr. Robert Carter III, Ph.D., Director of Research at Take a Breath Texas, an initiative that promotes awareness of mental health programs for veterans, the time it takes you to receive a notification and check it allows your brain to produce more dopamine in anticipation of a positive outcome. A few negative posts or messages now and again won’t do much harm to that helpful anticipatory response, he says, but your brain can also be conditioned to expect negativity if your social media is full of emotionally difficult posts.

“Too many failed outcomes on social media can breakdown our reward pathways in our brains, and may result in nervousness, manic, or depressive symptoms,” Dr. Carter tells Bustle. This is because your brain can be disappointed so often that it can be chemically altered. When you’re expecting positivity on Twitter, for example, and are constantly exposed to negativity instead, Dr. Carter says that “dopamine activity drops, sending a negative feedback signal to the relevant parts of the brain, weakening the positive association.”

According to psychologist Dr. Mary Alvord, PhD, an Anxiety and Depression Association of America (ADAA) member, several different kinds of negative social media posts may be damaging to your mental health. Some negative posts might be about you directly, while others are about people you care about, or what’s going on in the broader world. She tells Bustle that it’s important to remember that while social media can make you feel out of control, there is a lot of control that you do have: you control whether you’re on social media, how long you spend there, who you follow, and what kinds of posts you interact with. And while it’s easy to catastrophize about negative posts directed at you, she tells Bustle that sometimes it’s important to take a step back and ask, “What advice might you give a friend going through the same thing? What action can you take (or ignore)?” That distance can help calm the situation in your mind.

However, harmful social media messages can be especially hard to turn off for people from marginalized groups, Dr. Carter tells Bustle. When social media posts contain racial epithets or implications that your humanity matters less than others’, for example, even a single negative word about a group you identify with can increase the activity in your amygdala, which is the fear center of the brain. “In response to negativity and the so-called ‘stereotype threat’,” Dr. Carter tells Bustle, “dozens of stress-producing hormones (i.e., cortical, vasopressin) and neurotransmitters (i.e., dopamine, epinephrine, norepinephrine) are released,” which make your body feel all kinds of stressed out and hurt.

Dr. Carter tells Bustle that the stereotype threat can be especially prevalent on social media. This is because your brain already forms a negative feedback loop when it is repeatedly exposed to these kinds of harmful posts. To make matters worse for your brain, “Some people have a tendency to engage in negativity on social media as a means of deterring the behavior of others,” Dr. Carter says, such as when you try to out-argue that white supremacist on Twitter. And while these attempts are understandable, he tells Bustle that “the majority of the time, attempts to change social media negativity results in undesired changes in the brain.”

There are, however, several things you can do to protect yourself from the potential damages caused by negative social media posts. “If specific social media brings up insecurities, protect your emotions and engage with social media mindfully,” Dr. Carter explains. “Examine your feelings prior to and after social media use. Do you feel more relaxed or overwhelmed? Unplug from any followers or accounts that evoke unhelpful reactions or when you feel overwhelmed.” If you want support finding ways to manage these feelings, the ADAA has resources to help you find it.

Even if you don’t think negative posts impact you, Dr. Carter says, your brain chemistry says otherwise. So take good care of yourself, both online and IRL. Seeking support from mental health professionals can be helpful in figuring out a good balance with your social media use, and remember that self-care always comes first.

More like this
Ashamed Of Your Screen Time Stats? Here's How To Change That
By Alexis Morillo
11 Super Bowl Instagram Captions To Use On Game Day — Even If You Don’t Like Sports
By Alexis Morillo
24 Funny Valentine’s Day Captions To Use No Matter Your Relationship Status
By Jessica Booth
Flip Phones Are Gen Z's Favorite New Nightlife Accessory
By Maria Santa Poggi
Get Even More From Bustle — Sign Up For The Newsletter
From hair trends to relationship advice, our daily newsletter has everything you need to sound like a person who’s on TikTok, even if you aren’t.