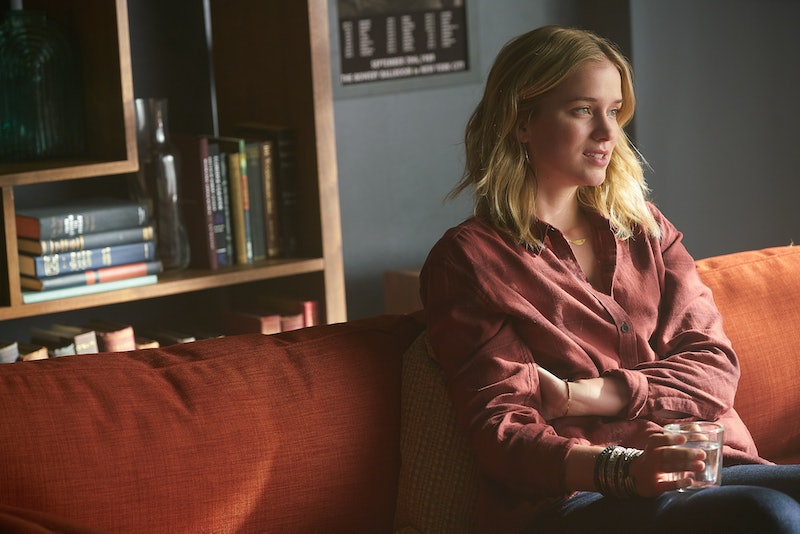 Spoilers ahead for Caroline Kepnes' book, You, and the Lifetime series of the same name. While fans of Caroline Kepnes' You might have some guesses as to what will happen in the Season 1 finale, viewers who didn't read the book are probably still in the dark and at the edge of their seats. If you don't mind some major spoilers, what happens to Beck in the You book is very similar to what happens to her in the series. And it's not great.

As fans have seen in the Lifetime series, Joe sees himself as a romantic-comedy hero of sorts, not as a creepy serial killer. He appears to truly believe that he's doing what's best for Beck, which makes all of the murders so disturbing. And at the end of the book, Joe kills Beck — all while believing he's still acting in her best interests.

In You's penultimate episode, Joe knocks Beck unconscious and locks her in the bookstore's glass cage. This punishment comes after Beck finds the "mementos" Joe's been hiding, which include her underwear and even a used tampon. Anyone would be rightly creeped out by this, and even Joe seems to know that those things prove he's a criminal. Well, kind of. In both the show and the book, her finding the box of "souvenirs" freaks him out enough to hurt and isolate her, but he seems to him he can explain his actions.

As the novel goes, after Joe locks Beck in the rare book cage, he tries to reason with her, testing out whether a relationship is still a possibility. He asks her questions to gauge her responses and to see whether or not she could ever love him again. Joe also makes her read a Dan Brown novel, which he reads at the same time, a twisted callback to a conversation they had the first time they met.

In the book, Beck pretends that she can forgive Joe in order to stage her escape. She convinces him to let her out of the cage before making a break for the bookstore's front door, but it's locked. Since she's already admitted to Joe that she can't love him anymore, Beck tries another tactic.

"How could I have done this? I never made you pancakes," Joe narrates in the book. "What the f*ck is wrong with me?"

It turns out that Beck saw Joe at her poetry reading in Brooklyn, and she knew he followed her that night. By sharing that she'd known that fact, and apparently not been bothered by it, Beck hopes to convince Joe that she won't tell the police that he killed Peach and Benji, and that he'll thus spare her life. (She's known about his propensity for stalking for this long, so what are a few murders at this point?) Interestingly, this is one of the only times Beck's viewpoint is seen in the book, as opposed to the once or twice it is shown in the series (during that early sex scene with Benji and the day of the Shakespeare festival with her father).

Joe, though, seems to hope that Beck could still change her mind about him, even after she runs from the cage. He doesn't see any problems with everything that's happened, still holding onto the hope that she might choose him. So when Beck tells him that she can be "gone, forever" — as in, not running to the police — he starts choking her, because he doesn't want her to leave his life at all. Beck, like Peach, does her best to fight back, but Joe overpowers her in the end.

Unlike when he killed Benji and Peach, Joe does seem to feel remorse after killing Beck. "How could I have done this? I never made you pancakes," Joe narrates in the book. "What the f*ck is wrong with me?" Joe proceeds to cry over Beck's passing, but he's evidently not torn up enough to risk getting caught for the murder. Joe drives his ex-girlfriend's body upstate, burying her in the woods behind therapist Dr. Nicky's house. It's a twisted ending to a twisted story, and it doesn't seem like Beck will be Joe's final murder victim.