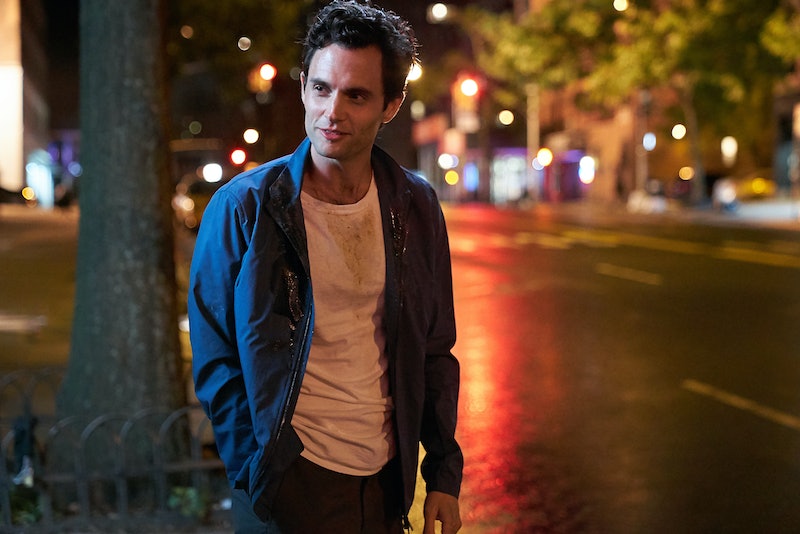 Have you ever had the feeling that a certain actor was typecast? In the case of Penn Badgley, who plays Joe in Lifetime’s new thriller, You, it’s hard to deny. Badgley’s first big job was playing Dan Humphrey on the iconic teen soap Gossip Girl, and now, in playing Joe, he’s basically Dan Humphrey again. Just dialed up to chilling levels. In fact, Penn Badgley’s You character could be potentially triggering for many viewers, so if you have any history of emotional or physical abuse, stay far far away from this show. That’s how scary this guy gets, and, really, it’s in poor taste.

Dan Humphrey turned out to be Gossip Girl (there’s no spoiler alert for a finale that happened six years ago, sorry), and it all made sense. Dan was a glorified, normalized stalker that followed his friends and the woman he allegedly loved around as a means to gain access to their world and exploit them at their most vulnerable. Dan Humphrey was the worst. Dan Humphrey is the guy that corrects your spelling on a message board. Dan Humphrey makes a snide comment if you overuse the word “literally.” Dan Humphrey is every man in every MFA program. But Joe of You is worse — much worse — because he's not a caricature of some awful dude who still believes in the "friend zone." Joe is way too real and violent.

He’s a clerk in a book store, and when he first sees Beck, he’s smitten. No — he’s obsessed. Joe is a man who is convinced that every woman — Beck, in this case — is putting on a show for the men around her. When Beck isn’t wearing a bra during their first meeting, Joe, in his head, surmises it’s because she wants him to see. Maybe, just maybe, she loves not wearing a bra. Over the course of the premiere episode of You, Joe’s mania ramps up quickly — he follows Beck home, he invades her apartment, he masturbates to her while standing across the street, looking into her window.

Joe is the type of man who flexes his own control and hides it under the shadow of love, of what’s best. Joe thinks Beck should get curtains, lest some pervert see inside her windows. Joe nearly kills Beck’s ex-boyfriend because he’s not good enough for her. Joe saves Beck from a subway train so he can be her knight in shining armor. Joe subverts Beck’s autonomy because he wants her to himself. He doesn’t want her to be happy. He wants her to be what he wants her to be.

This sort of story isn’t anything new — since, oh, the garden of Eden, men have surmised that women didn’t know enough to know any better and needed to be fixed because women are hysterical, fragile beings, who can't remember to wear their bra.

And it’s nice to think that things are better for women in 2018 — and they are, in bits — but our hard-won rights are tenuous, at best. Battles against abortion and contraception and equal pay and sexual assault are fought every day, simply because the men in power assume that they know what’s best for the women they rule over. In the real world, one in six women has been the victim of stalking, according to the National Domestic Violence Hotline.

You's Joe isn’t anything new, but he is terrifying. All Lifetime programming is over the top, but it’s usually in a melodramatic way. You and Joe are over the top because so many women know a man like Joe. He might not be kidnapping an ex of yours, but he’s not OK that you didn’t take your husband’s last name. Or he thinks you shouldn’t work outside the house. Or that “no” is really “maybe,” and you were wearing a short skirt, anyway.

More like this
Kidnapping Victim Jan Broberg Is Prepared For A Friend Of The Family Criticism
By Brad Witter
9 Movies & TV Shows That Prove Stanley Tucci Elevates Everything He’s In
By Jake Viswanath and Radhika Menon
Who’s The Richest 'Grey’s Anatomy' Star? See The Net Worth Of Each Cast Member
By Hugh McIntyre
'The White Lotus' Season 2 Trailer Teases Multiple Affairs & Another Dead Body
By Bustle Editors
Get Even More From Bustle — Sign Up For The Newsletter