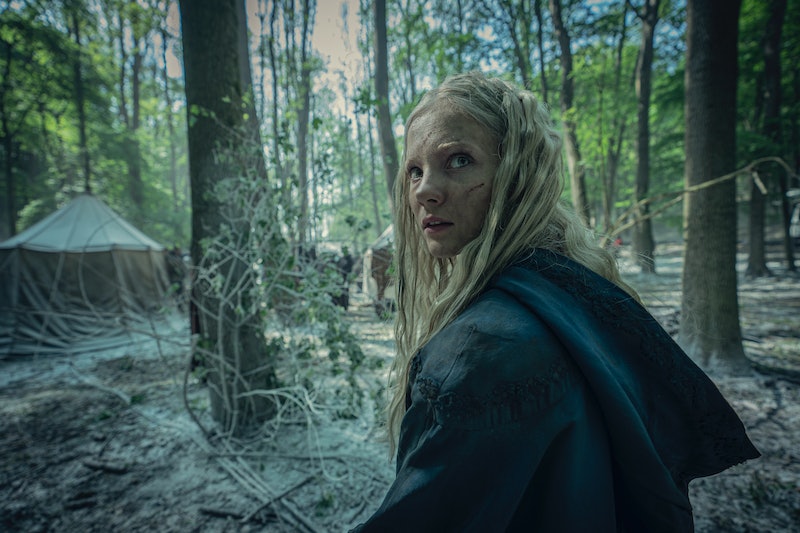 Spoilers ahead for The Witcher books and Netflix series. Although it's now a Netflix original, The Witcher is based on the book series by Polish author Andrzej Sapkowski, also serving as the jumping off point for the eponymous CD Projekt Red game. For that reason, the book storylines occurred before the RPG, so fans of the games will have to view both the Netflix and book series as a prequel, with recognizable characters like Geralt of Rivia (Henry Cavill in the Netflix show), Triss, and Yennefer. One such character from both the show and video game, Ciri, was in The Witcher books, as well.

According to his publisher, SuperNOWA, The Witcher franchise began when Sapkowski submitted Wiedzmín (Witcher in Polish) to a fantasy magazine called Fantastyka back in the '80s. Although there are technically eight books in the series, the first two — The Last Wish and Sword of Destiny — are actually short story collections, which were originally published in 1993 and 1992, respectively, before being translated into English in 2007 and 2015, per i09.

The eighth book, Season of Storms, functions outside the same timeframe, so it's not part of the five core books in the Witcher saga. Chronologically, this includes Blood of Elves, The Time of Contempt, Baptism of Fire, The Tower of Swallows, and The Lady of the Lake.

So what happens to Ciri (Freya Allan) in The Witcher books? Well, a lot. Since the books are the Polish equivalent to Game of Thrones, there are several timelines, plot points, and characters to keep track of. That said, here's what we know: Cirilla Fiona Elen Riannon is from Cintra, per the character wiki, and was the daughter of Pavetta and Emhyr var Emreis, also known as Duny.

When Ciri's father, Emhyr, was a child, a sorcerer named Braathens cursed him to take on the likeness of a hedgehog during the day, per the wiki, only returning to human form at night. Eventually, however, Geralt of Rivia helps lift Emhyr's curse, and as payment, the Witcher cites the Law of Surprise, which occurs in The Last Wish short story, "A Question of Price." As a result, Geralt asks for their firstborn child so that he/she might become a witcher, too (Pavetta was unwittingly pregnant at the time).

Then, when Ciri is five, her parents die out at sea, rendering her an orphan. However, it's later revealed that Emhyr faked the whole thing but accidentally murdered his wife in the process. After her parents' "death," Ciri is taken in by her grandmother, Queen Calanthe, who tries to marry her off to Prince Kistrin. This is detailed in the short story, "Sword of Destiny," from the book of the same title.

But en route to meet her fiancé, Ciri escapes into the forest, where she's attacked by a giant centipede. Geralt and a dryad named Braenn hear the princess and come to her rescue. At this point, the witcher is unaware that Ciri is his child of promise (he assumes Pavetta gave birth to a boy), and eventually, the princess is returned home to her grandmother.

The Blood of Elves appears to be where the Netflix show finally picks up. In the first novel in the Witcher series, the Empire of Nilfgaard (led by Ciri's father, Emhyr) attacks Ciri's home kingdom of Cintra. As a result, her grandmother dies by suicide, and the young girl escapes. Geralt rescues Ciri and takes her to Kaer Morhen, where she is trained to be a witcher, too.

However, it's soon obvious that her talents far exceed any normal Witcher. In fact, Ciri is a Source, which the wiki describes as "a person born with a natural affinity for magical abilities which are rather difficult to control once they have bloomed, which can sometimes lead to mental illness, like catatonia, if not helped."

As a result, Ciri is trained by Geralt's former paramour and skilled sorceress, Yennefer, and the two women form a close bond. The Time of Contempt, then, follows the princess getting in and out of scrapes, which include being captured by teachers at the school Aretuza, escaping to the desert, and being kidnapped by Nilfgaardian bounty hunters. She is eventually freed by the Rats, a group of bandits.

Next, Baptism of Fire follows Geralt's quest to recover the missing Ciri, who has fallen in with the Rats and become a ruthless killer. In The Tower of the Swallow, a bounty hunter named Leo Bonhart massacres the Rats, and a philosopher named Vysogota takes in an injured Ciri. Geralt, meanwhile, is still on the hunt for his ward.

The Lady of the Lake occurs largely through Ciri telling Sir Galahad how she, Geralt, and Yennefer tried to reunite. The book follows the princess as she walks through a portal (located in the Tower of the Swallow) into the world of the Aen Elle elves, from which she's unable to return. According to Ciri's character wiki, she proceeds to jump through different worlds with the help of a unicorn named Little Horse, a.k.a. Ihuarraquax. At the end, she's shown heading to King Arthur's court with Sir Galahad and separated from her two mentors, who are on Malus Island when the book ends.

That is all readers know of Ciri's book trajectory so far, since Season of Storms does not continue the events of Book 7. And while it's a something of a cliffhanger, Sapkowski has said the Witcher books ended how he wanted them to. In an interview with Orbit Books, the author teased that he may write more novels in the same universe, but they won't follow the same story from the core Witcher saga. "It was absolutely sure for me that I will not ever write anything that happens later, so there will be no continuation," Sapkowski said. "I promised it to the fans, I declared it many times, so I had to keep my word."