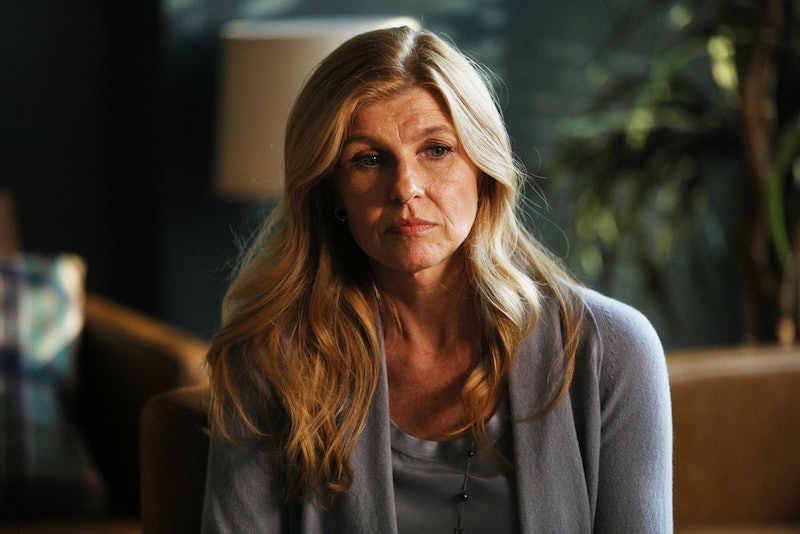 Spoilers ahead for the Dirty John podcast and Bravo series. On Sept. 11, 2017, the L.A. Times and Wondery began a podcast called Dirty John, which has since been turned into a Bravo show. The six-part series followed a four-time divorcée named Debra Newell (Connie Britton), who met a charming man named John Meehan (Eric Bana). Although her children were suspicious of their mom's new boyfriend, Debra was a bit slower to catch on to his true nature, seduced by his charisma, good looks, and manipulative tendencies. They soon got married, and Debra slowly realized what her daughters, Jacqueline and Terra, were talking about. So although the Bravo series doesn't wrap up until January, the podcast has already revealed what happened to Debra Newell on Dirty John.

As viewers likely know by now, John was not exactly an upstanding citizen. For one, his schlubby wardrobe didn't scream medical doctor, which he claimed was his profession. What's more, John moved into Debra's penthouse, drove her car around, and allowed her to buy him a new wardrobe, according to the L.A. Times. If he were really a medical professional, where was his own healthy salary? And what kind of medical professional wears their scrubs outside of the hospital, anyway?

Debra's nephew, Shad Vickers, also began suspecting there was more to John than met the eye. Debra's children hired a private investigator to look into John, per the L.A. Times, and they discovered some troubling things. For one, he was a nurse, not a doctor. What's more, he used to live in a trailer park, and he'd also been in jail.

After Shad tried warning Debra that John wasn't being honest with her, Mehan sent him a sinister text: "Why don’t you simply go away," he wrote, per the L.A. Times. "You’re not invited here. You come near and I call the cops. … Worry about your own miserable life and I’ll worry about Debbie, who is a lot closer to me than you can ever imagine. You won’t win this."

Fortunately, Debra found some papers that John had mistakenly left out one day, and she learned that he was a disgraced nurse anesthesiologist, drug addict, and con man, per the L.A. Times. It was also revealed through court documents that he had been married before and that three women in Southern California had restraining orders against him.

The couple had a tumultuous marriage, and Debra finally left John for good in March 2016. Toward the end, she was terrified of her husband, slowly withdrawing money and giving it to friends or one of her daughters for safekeeping, per the L.A. Times. However, John didn't just sit back and take the separation. He began taunting her. "Make yourself available or I ruin a family," he wrote his wife, according to the same article. "There are children involved, Deb. This is bigger than you. You’re selfish to allow this. You’ll never forgive yourself but I am doing it."

Listeners of the podcast will recall that John ultimately attacked Debra's daughter, Terra, on Aug. 20, 2016, per the L.A. Times. However, she was able to fight him off, thanks in large part to her obsession with The Walking Dead. In fact, Terra stabbed him through his left eye, the blade going into his brain. And although John didn't die on scene, he was taken off of life support a few days later on Aug. 24, according to the report.

As for Debra, she is thankfully alive and well, as are her family members. She's become close with her children again, according to the L.A. Times, but she still feels guilty for introducing her family to John Meehan in the first place. As of Oct. 2017, when the final article in the series was published, she wasn't planning to date anytime soon, and she'd even given her daughters self-defense equipment like rape whistles and stun guns. And although the Dirty John Bravo series hasn't ended yet, it will be interesting to see whether it remains true to its source material. But whatever happens to the onscreen portrayal of Debra Newell, audiences can rest assured that her real-life counterpart is safe and sound.