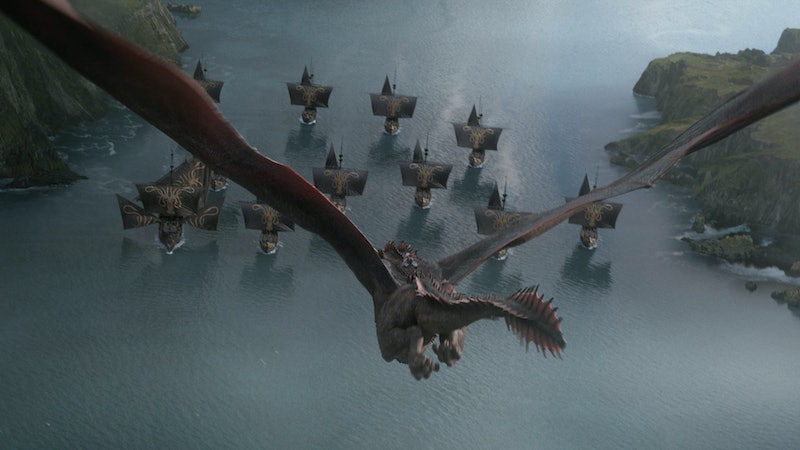 After what Daenerys Targaryen did to King's Landing on Game of Thrones, more than one character might want to kill her and cut her reign in Westeros short in the Season 8 finale. However, there's one scaly problem for anyone who wants her dead now. If Daenerys dies on Game of Thrones, what happens to Drogon? The last dragon isn't likely to go quietly.

In Harry Potter, the Hogwarts motto translates from Latin to warn "never tickle a sleeping dragon" — and if there was a Game of Thrones version of that, "never murder the vengeful mother of a particularly violent dragon" would be pretty high up there. While Daenerys' motivations, or lack thereof, for turning her fire on the citizens of King's Landing in addition to their armies and leaders are questionable and more than a bit rushed, there's no doubt that Drogon is willing to burn anyone and anything to a crisp. If his mother was killed, he would almost certainly go rogue and torch more people/cities, right?

Hopefully, if Daenerys is assassinated or executed for war crimes against Westeros, the people carrying out the sentence have some kind of contingency plan either to contain Drogon, banish him, or kill him as well. Let us also pray that there are no other dragons bopping around, either. Even if Daenerys lives, there is a world in which she may want to part ways with her favorite son in order to make the Seven Kingdoms a better place. Here are some different ends that Drogon could meet:

If Drogon hasn't yet started "Dracarys"-ing people outside of Daenerys' orders, it kind of seems a little inhuman to kill him, don't you think? Still, he did kill a lot of people, and everyone is much safer without him. With no more scorpions left, how could they do it?

One of the only options would be to lock him up and starve him to death. It's depressing, and Drogon's attack just crushed Jaime and Cersei in the very crypt where he would be imprisoned, but it could definitely happen.

Drogon Moves In With Jon Snow

He's not his real dad, but the dragons do kind of like Jon. Maybe he could keep Drogon with him, or take him somewhere. A lot of that depends, of course, on Jon's fate in the Game of Thrones finale as well.

If Drogon just flew off into the sunset without looking back, it wouldn't be the first time. In Season 4, he disappeared after killing a goatherd's daughter, and didn't return until Season 5. He'd been hanging out over the ruins of Valyria, where Tyrion spots him for the first time. Even after whisking Daenerys out of the Meereen fighting pits and dropping her off near a Dothraki khalasar, he wandered off again. So it would not be out of character for Drogon to just leave (probably for Valyria) and not bother anybody.

However, if he required assistance, there is one person who may be able to help and satisfy a major fan theory while doing so: Bran. What if this gets Bran to warg into a dragon — so that he can send Drogon away? It'd be pretty cool. If Daenerys doesn't make it out of the Game of Thrones series finale alive, and honestly odds are not looking good, the fate of her beloved Drogon is a major concern. Fingers crossed that it goes better than the attack on King's Landing.